Working on my Phantom I decided to remove and replace the caps in the agc amplifier transformer. When I removed the transformer I found that the coil was damaged with half of the winding missing and the last repairer had tried to fix the problem, the lefthand winding is in a very poor state. I thought that this would give a good opportunity to provide some information about these transformers,
As drawn in the schematic the two coils have 50pf trimmers with 75pf padder caps across each one,
I kept the orientation of the drawing with Riders, this makes the input on the left and the output on the right.

here is a drawing of the transformer as it appears in the schematic, 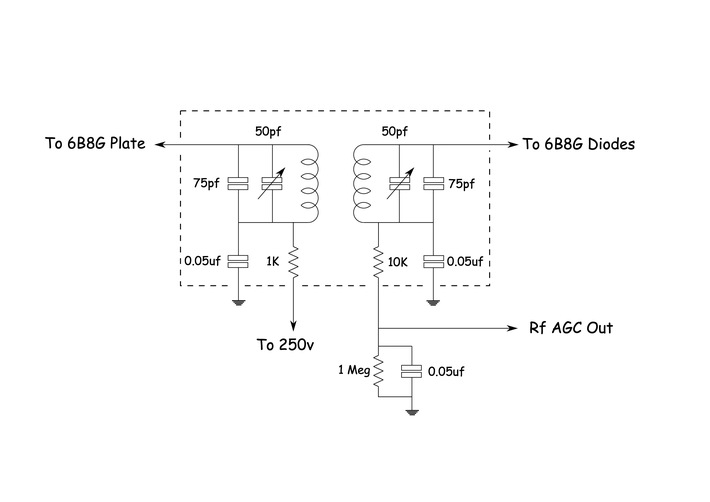 Rather than just replace the coil assembly I decided to rewind the damaged one and see if I can match Scott’s performance.

The coil was removed from the can by desoldering the mounting lugs and removing the single mounting screw hidden in the coil tube, unfortunately the old damaged coil fell apart when removing, not a problem as both coils are the same size, and wound in the same direction. 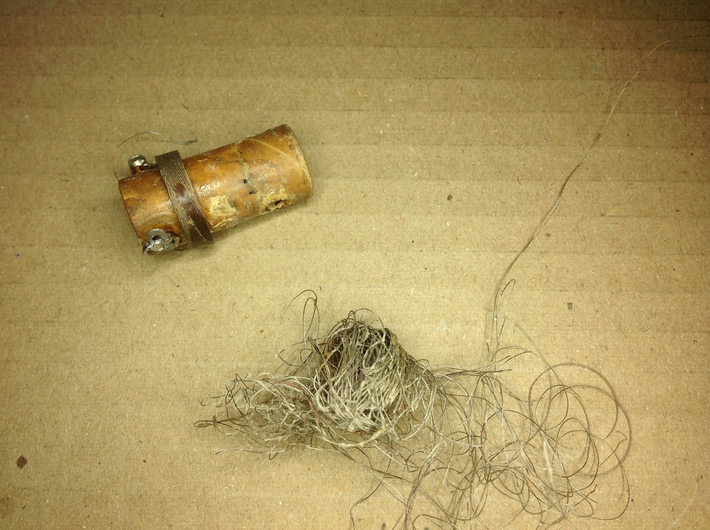 In the photo two solder lugs have been broken off in the past, these will need to be replaced to give a somewhere to affix the replacement winding, so I used some eyelets meant for pcb track repair and some small solder lugs. Here is problem No1, the original wire is somewhere around 40awg silk covered wire, and almost impossible to get,

I thought that it would be a good opportunity to rewind the coil with 7/0.05 Litz
Although this is much thicker than the original wire hopefully the ‘Q’ will be higher.

The former was fitted to my homemade honeycomb coil winder and I wound on 240 turns, Here is a photo of my coil winder, made from parts I found in the shop, the bearings are from brass hinges and the shafts from steel rods, the excentric cam is adjustable to set the width of the coil. I made the coil slightly wider than the original to make the coil fit in the can, even so there is only just enough room.

Here is the finished coil ready for testing, both ends have been fixed with small blobs of beeswax. To find the internal capacitance and self resonance I used the following method,

Connect a signal generator to the coil under test through a resistor,
this keeps the low output impedance of the signal generator from interfering with the resonance of the coil,
Connect an oscilloscope across the coil with a x10 probe to remove as much of the scope capacitance as possible. the oscillator is then adjusted until the lowest and largest peak is found this is the coil resonance, this is done as we find the internal capacitance of the coil, as this will have to be added to the LC equasion to find the self resonance of each coil.

To avoid any math I used an online LC calculator to find the internal capacitance by feeding the known inductance and the resonant frequency,

the one I used is here,

The following results were found

The Scott coil has a free resonance of 938khz, this gives the internal capacitance as 28.78pf

The wound coil has a free resonance of 1200khz and an internal capacitance of 23.6 pf

Now to add the trimmer capacitors with the padders and the internal capacitance to find out where the transformer will resonate,

and when fed through the lc calculator with an inductance of 1000µh gives 405.85khz

the bottom therotical frequency of the Scott winding,

so we have the following

The Scott coil resonates between 406khz to 495 khz

The rewound coil resonates between 436khz to 535khz

ok this gives plenty of overlap between the two coils to work.

Testing is done using the diagram, the components in red are not fitted during the test, the 10k resistor fitted to the transformer is a very convenient place to connect the signal generator. 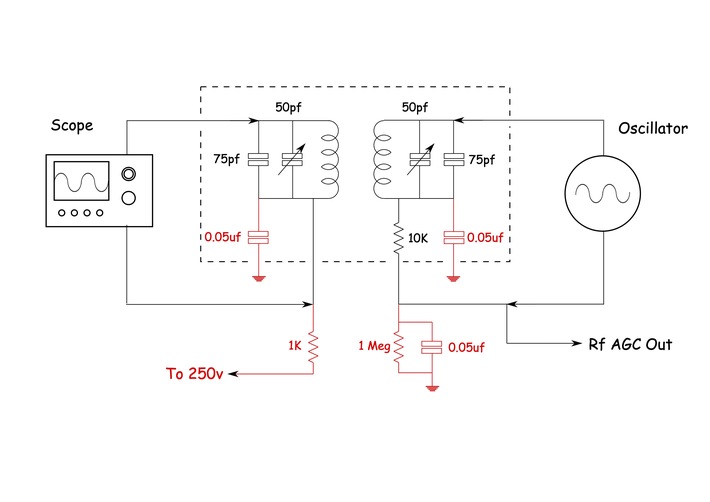 The two trimmer cap positions are as shown in the photo, 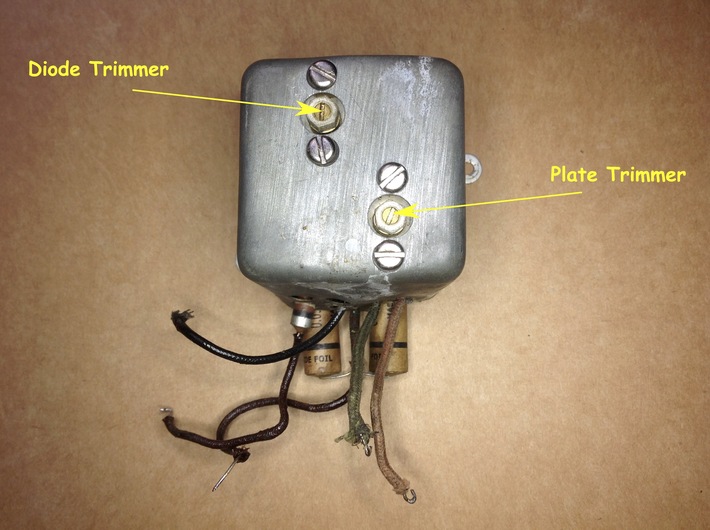 and a photo of the finished transformer, I have wrapped the polypropylene caps with fake Scott covers as I'm not too keen on bright yellow caps in old radios, The rewind proved to be a great success and aligned to 465khz as used in my radio,

now onwards with the rest of the cap change.

Kent probably has good one from a parts set.

Excellent Mike, as usual.   I have wanted to build a coil winder, but never had the need for one :-)