Wondering how much attention the techs on this site have given to the 10Kc attenuator circuit on the power supply chassis. It appears to have been given serious thought by EH Scott. Each chassis had the notch filter individually tuned. The FCC today is careful about assigning adjacent frequencies which would cause a whistle in reception, although the range of the Allwave might pull two adjacent stations that are physically a 1000+ miles apart. The downside of the circuit is that it will generate a 10Kc notch in audio reponse. Frequency sweeping the output with an audio generator shows it's not a very sharp filter and pulls down more adjacent audio frequencies than would be ideal. More troublesome when you consider the bandpass filter is still in the circuit for the phono/aux input. The other issue is replacing the .13 mfd caps. That value is obsolete and while you could parallel a couple caps to get .13, there's not much room under the board to do this. Also you technically should re-tune the circuit after doing this (by varying the value of C7). So what have you guys done in your sets? Recap close enough and go away happy? Retune? Bypass the attenuator? Curious to hear some opinions....

Recap, retune for the short answer. In a powerful set like the 23 or newer Scott, the whistle can be very intrusive. Yes, it's not ideal. Yes, it's in for the phono, but when you consider sources of program in 1935 and the fact that most of the AW23s produced came without tweeters, it's a welcome addition. Even with tweeters, some 11 kc + info could be gleaned on experimental broadcasts and some records. I've heard a beautifully restored example with properly tuned filter sounding very good when compared to a radio with no filter. It can make the difference between a listenable station and an unlistenable one hear in the NY metro area.

Consider also that Scott was all about leading edge technology and highest quality audio for radio. The 1935 Scott AW-23 was designed to receive and make the most of the experimental hi-fidelity AM radio stations being established at the top of the AM Broadcast dial with 20 kc separation in cities like (if my memory serves me right) Chicago, St Louis, NYC and Los Angeles. In addition, higher fidelity radio broadcasting generally and improvements in phonograph records seemed to be in the near future.

AW-23's built for Europe had the notch filter set for 9,000 cycles as their AM station spacing was different.

Scott wrote in the owner's manual he liked to demo the Scott in Chicago by receiving well WOR Newark at 710 between Cincinnati's 500KW WLW at 700 and Chicago's 50KW WGN at 720 on the dial and, so, the notch filter should have been helpful given the fidelity the AW-23 was capable of.

The late 1930's development of FM and the advent of the early FM stations altered the landscape.

If I were going to alter an AW-23, I would try to rig an outboard toggle switch to bypass the notch filter when desired for phono/FM/CD input.

Permalink Reply by J.N. Shetler on January 20, 2013 at 12:04pm
A sincere thanks to you guys for offering up some info. I figured I would try and get the "10Kc null" as spot-on as possible and go away happy. The attenuation is stretched about 1.1Kc in either direction, which leaves a decent audio gap, but far better than hearing an annoying whistle. The toggle switch is a good idea, might take some doing though as the circuit is in the plate supply for the 2A3s. One other curiosity is a power supply schematic variation in this area. It appears there was 10 watt 500 ohm rheostat in the early version to vary the level of attenuation. The only rheostat on mine is for hum balance. When the next version of the schematics appeared, the attenuation rheostat is gone and coincidentally the two position headphone switch appears. They must have had a reason to remove it. I can't ever recall seeing a power supply (early or late) that actually had the rheostat. Anyone have this feature on their "23"? 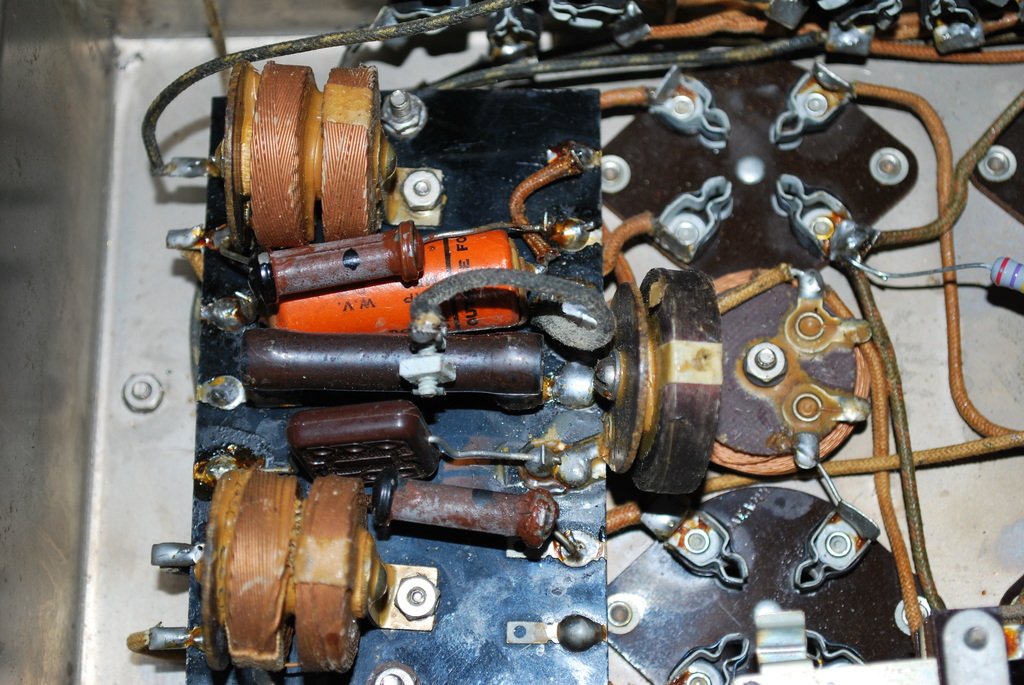