I have started another E.H. Scott restoration and wanted to share my progress for those interested.  Pictured is an early version AW12 Deluxe with AVC (Wunderlich tube) housed in an early version Tasman cabinet.  Upon receipt of the electronics, the set was wired for use with an 1930's era PM speaker.  The original E.H. Scott speaker was missing.  I purchased the set with a correct and working pair of E.H. Scott Rola twin speakers.  This Rola speaker setup has been seen and documented on early examples of the AW12 Deluxe chassis, which this set appears to be:

The All Wave 12 chassis/power supply and Rola speakers were added to this Tasman cabinet upon purchasing.  All is period correct thus showing an proper example as to what a complete set may have looked like brand new upon purchase via the Laboratory in the early 1930's.  Please feel free to comment as the restoration progresses.  I look forward to making this beautiful AW12 operational again! 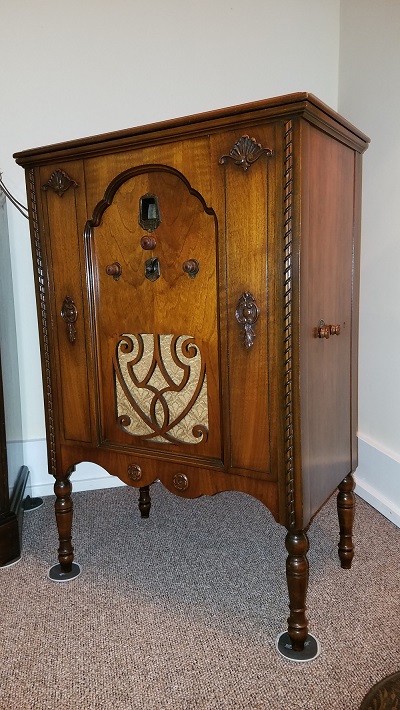 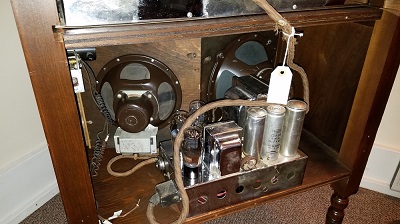 I have the 3rd version with the dual speakers and the blue Wunderlich tube. Interestingly there is no tone control on the back of the chassis. My serial no is F-99

Thank you Dave for sharing this information!

Thank you.  I appreciate you sharing your serial number.  I find E.H. Scott production run changes fascinating, so many variables.  This AW12 also has AVC within the circuit utilizing a Wunderlich tube.  My serial number is very close to yours! 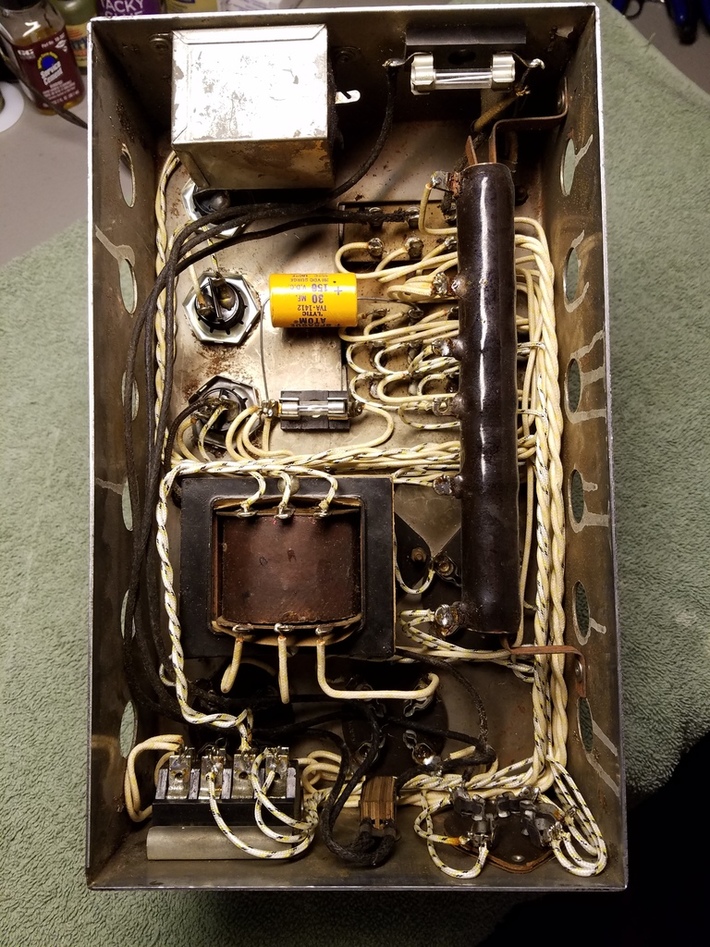 The replacement transformer has been removed from the 2-dial AW12 power supply: - Mine uses pin 6 together using pin 3 as part of the revised audio path separating the 2nd AF audio path back to the amp's interstage transformer. So, both my amp and the receiver are a partial redesign. All this is factory in as much as Corby Dawson has the same late version AW-12 Deluxe and he posted his adjusted receiver diagram in May 2012 on this Scott site on a thread.

- Thus, Scott radios can be an interesting restoration challenge. No Scott factory diagram has yet turned up for my version receiver (Ser# W-114)  and amp. Always pays to explore a Scott project set before beginning any work.

I agree Dave!  Thanks for the info too!

Thanks to a member of this list, I was able to have a power transformer reproduced for my

Allwave 23. The company is Heyboer transformer co. in Grand Haven Mi.  It took a couple of months to have it done and there is a small size difference from the original, but otherwise a very good result. Very reasonable cost for a one off product.  They are a small company and the reason it took so long is that they do this work in between their regular production work.

Thank you for informing me of Heyboer Transformer co.  Fellow collectors have mentioned Heyboer and services they provide.  I hear they do great work.  I will keep this information in mind should I need such a service performed in the future!

The 2 dial AW-12 power transformer is now installed on the deluxe power supply.  A controlled power up monitoring wattage and voltage proved to be successful as the set came to life instantaneously.  All tubes lit, stations were pulled in on all four bands utilizing a 30 ft. indoor antenna!  I absolutely amazed once again with the quality E.H. Scott put into his products.  I checked alignment on all four bands, dead on accurate to the dial scales!  All bands above broadcast can be deciphered utilizing an E.H. Scott provided "Station Finder".  Upon the introduction of the Allwave 15, a "Station Finder" was no longer needed.

My evaluation of performance:  Once again E.H. Scott comes through with perfection!  I have worked on over 100 pre-1935 radio circuits since starting this hobby ten years ago.  With respect to 1932 year radio sets, this E.H. Scott will blow away all competition offered in 1932 (from my restoration experience).  1932 Philco and RCA sets (from my restoration experience) don't stand a chance to the crisp clear powerful audio this AW-12 two speaker system provides.  Selectivity, sensitivity, and fidelity are the finest I have ever come across on a circa 1932 circuit.  DX'ing, also the finest for the year this set was introduced to the public.  Most general consumer radio sets circa 1932 didn't offer 4 band Allwave performance.  Opinion:  E.H. Scott receivers are the finest I have ever worked on.  Performance is unmatched to any manufacture with respect to year introduced.  The Allwave 12 is a fine set to work on and enjoyable to listen to as well! 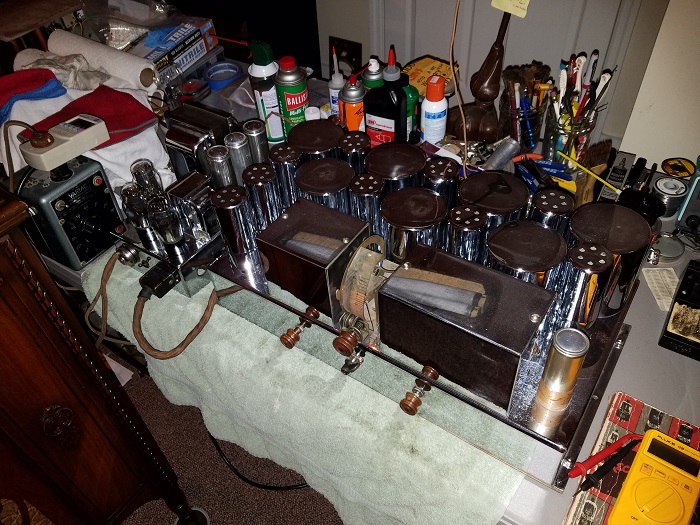 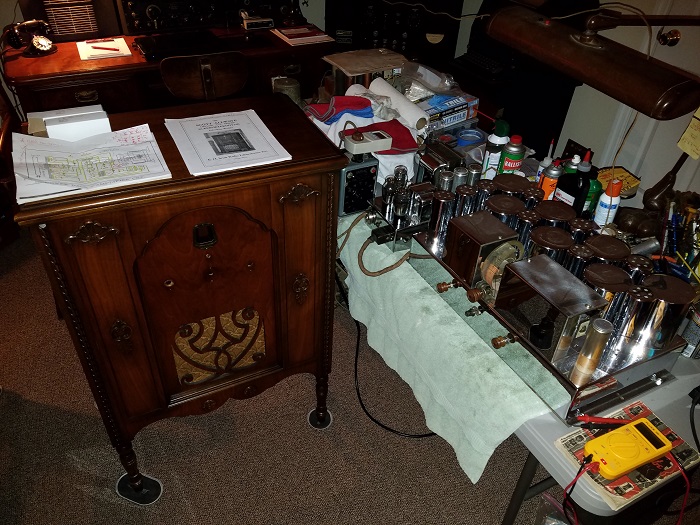 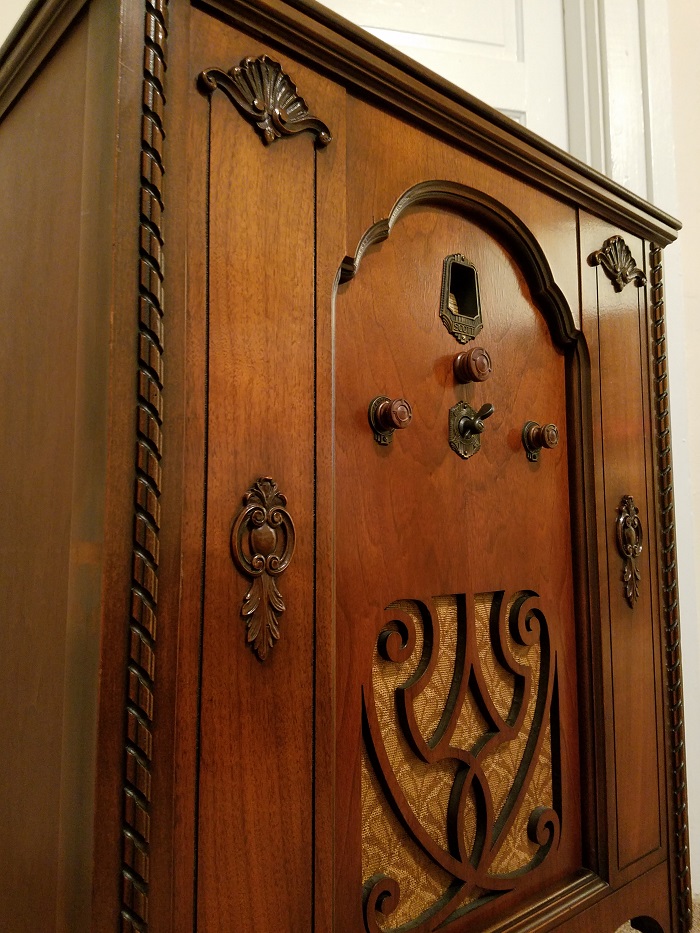 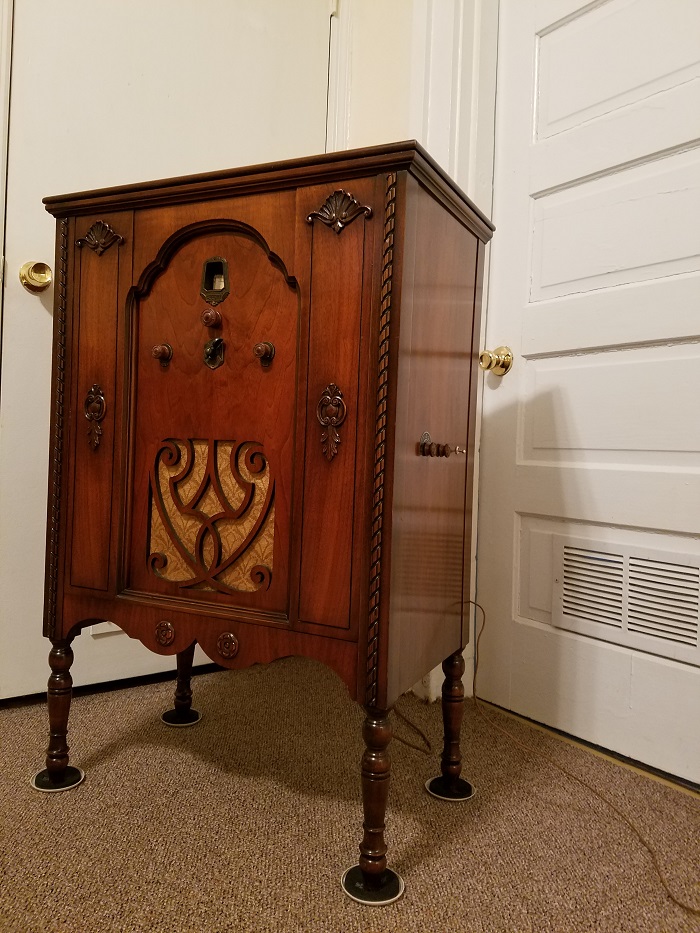 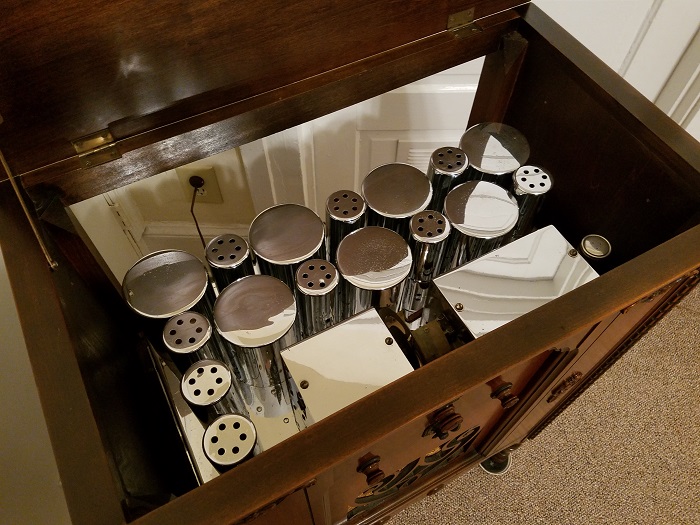 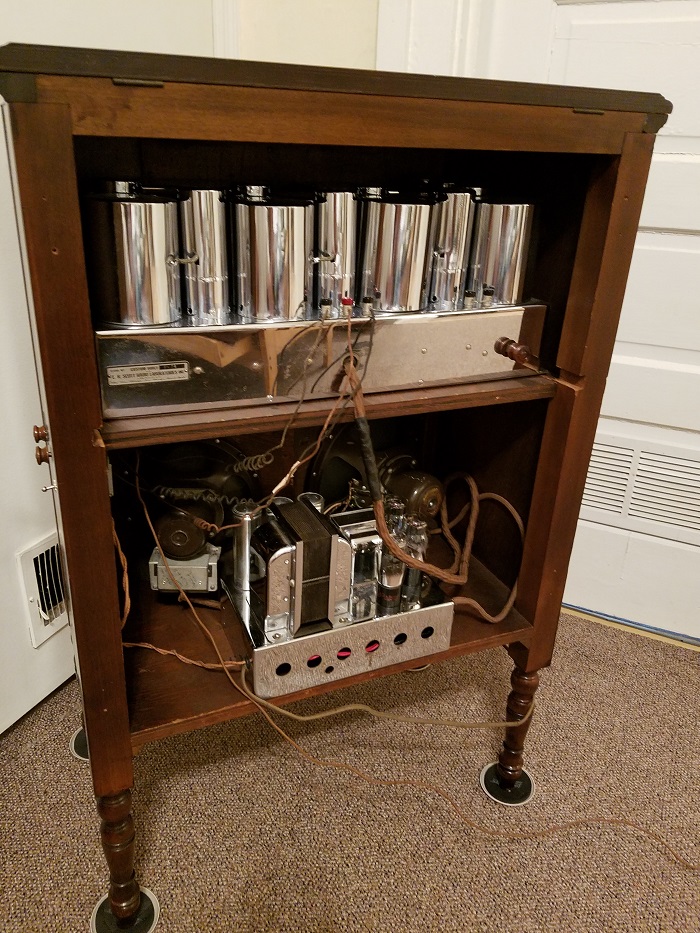 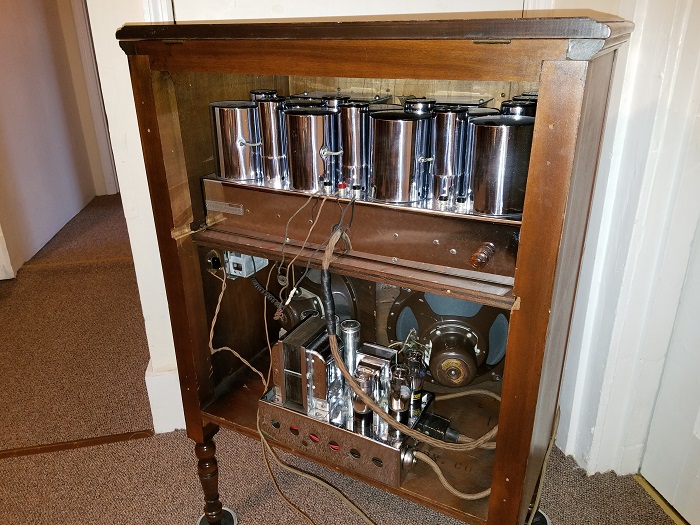 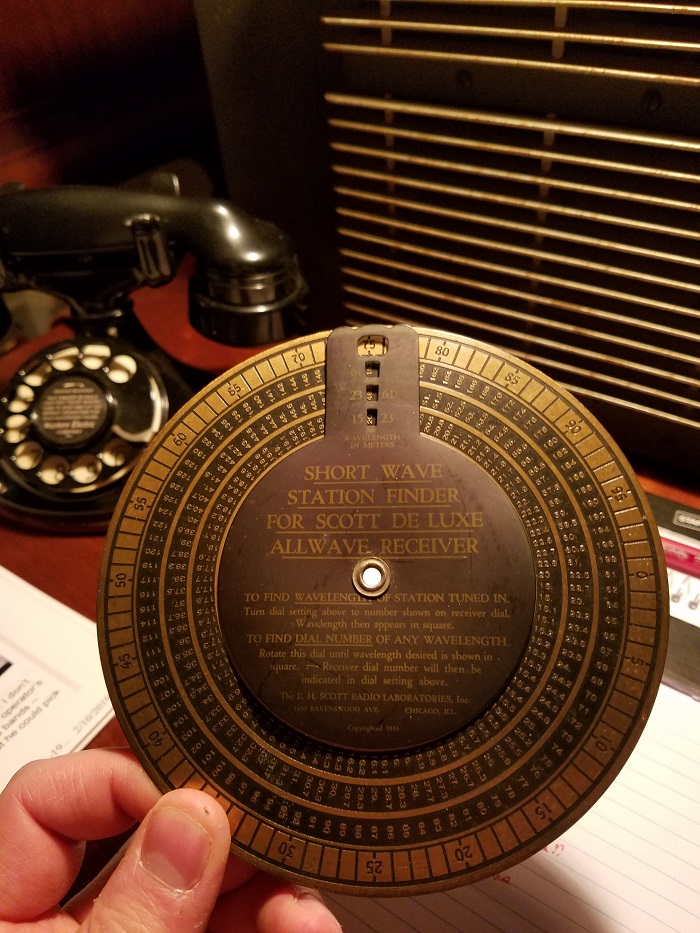 Ah - you have the metal version of the station finder. There is a heavy yellow paper version too.

The Scott AW-12 Broadcast band is calibrated in kilocycles, one of the first radios to do so. But the 3 SW bands are calibrated with a 1 to 100 scale. My paper version shortwave station finder translates SW dial number to meters for each band.

After seeing your two versions I started the hunt to find both myself.  I was lucky finding this brass version on the internet several months ago.  Thank you for the information regarding.  Question:  Which station finder came out first, brass or paper?