This restoration topic will cover an electrical restoration of the rare E.H. Scott AC-10 radio set.  Prior to the chrome years, preceding sets including the AC-10 were offered through custom set builders or kits supplied via E.H. Scott (then called Scott Transformer Co.) between the early 1920's through 1930.  While E.H. Scott offered the set to the consumer, they did not offer assembled sets direct due to then current RCA Superhetrodyne patents controlling the sale of the Superhetrodyne circuit.  E.H. Scott would contract through custom set builders (popular at the time) to have these radio units built for the customer.  I find this part of E.H. Scott history fascinating!

Not a cheap set by any means when sold new, the AC-10 was a high quality unit for the time it was introduced to the market.  The AC-10 consists of a tuner chassis, separate power amplifier, and E.H. Scott labeled Rola speaker.  There were several AC-10 versions offered between 1929-1930.  The set shown below is a late version, circa 1930.  Two sets of wiring harnesses connect both tuner and power amp together.  These cabled are already in the works of being replicated to look very close to or near exact copies of the originals.

I find the AC-10 a very attractive set, especially with it's copper coil shield along the back of the tuner.  AC-10's surface from time to time, complete example's are rare to come across from what I have seen within the hobby.  This example shown below is period correct.  Many thanks to the two gentlemen whom have allowed me to acquire the parts to make a complete set. 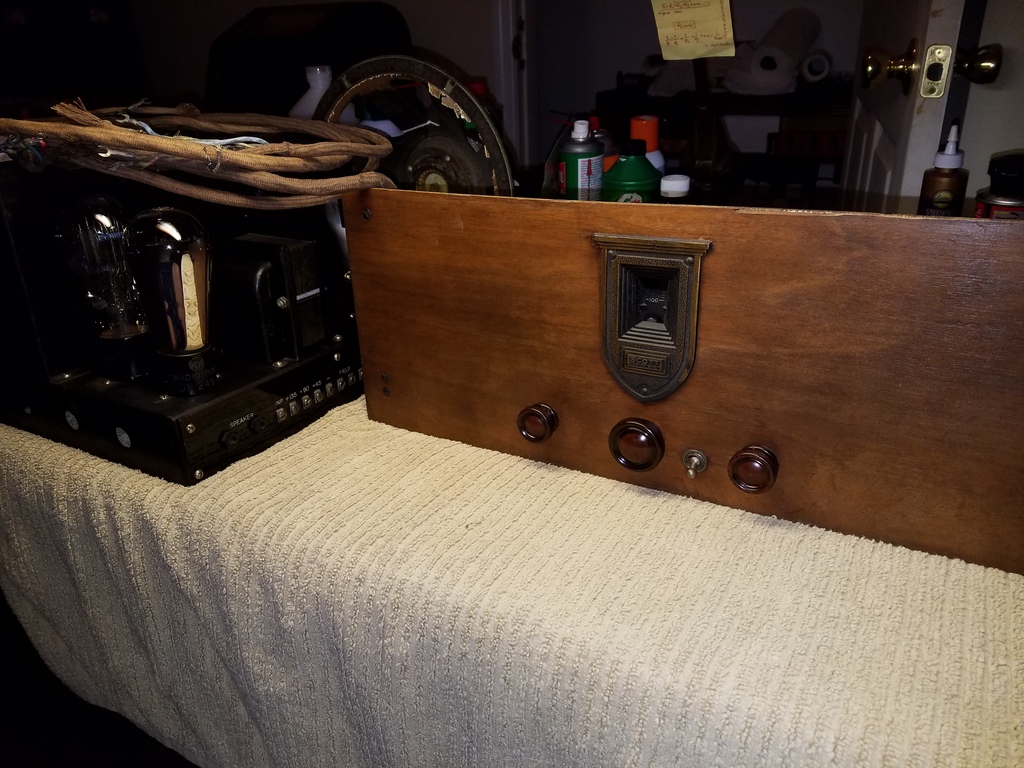 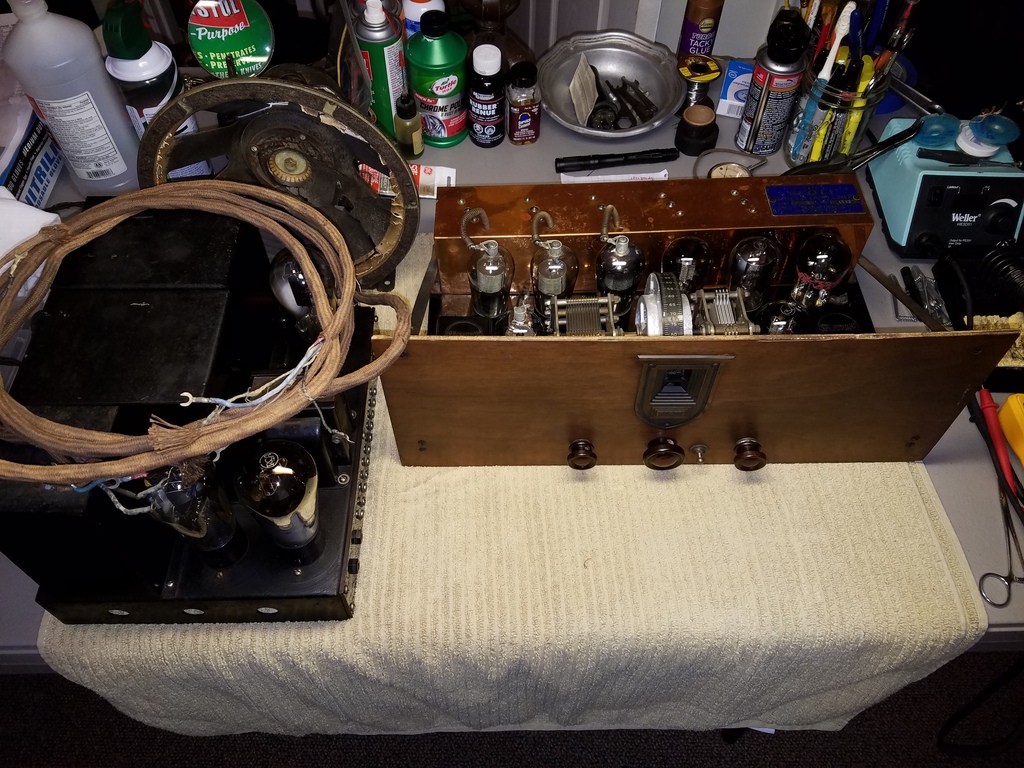 Thank you both for the comments and interest in this topic.  I am still waiting to hear back from my friend whom is re-coning the speaker.  An update should arrive soon.

Update:  I stopped by for a visit with my friend performing the speaker repair this past week.  He had decided to make a new cone, currently in the process of curing and molding the edge for a perfect circumference.  My good friend does spot on work, looking forward to the results!!  Should be a few more weeks and a first power-up of the entire set will be in order.

Will be back soon with more. 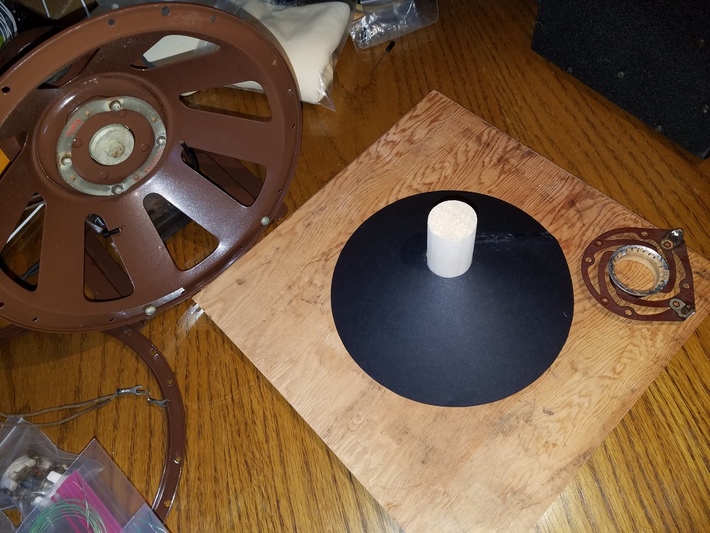 Update:  We are back on schedule regarding this restoration.  I have received the finished speaker!  During the 1920's most speaker manufactures used a type of leather surround for their speaker cones.  This Rola example had it's surround replaced with brand new Chamois material to simulate the type of leather material that would have been used back in the late 1920's.  This work was performed to maintain a period look.  Surround and cone work are spot on, many thanks to my good friend Steve.  The four tiny visible holes were needed to secure the spyder to the frame.  These tiny holes have since been filled and pose absolutely no ill effect with regards to speaker performance.  I completed the finishing touches to the speaker this morning with regarding to wiring and utilized the original surround felt pads once again.  Surround felt pads were place back in original locations as viewed prior to speaker disassembly. 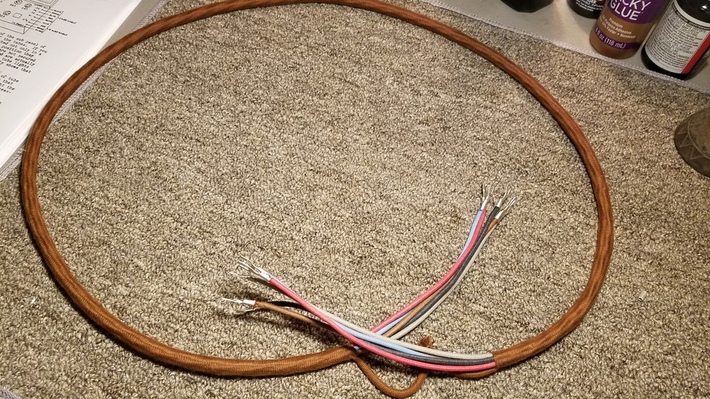 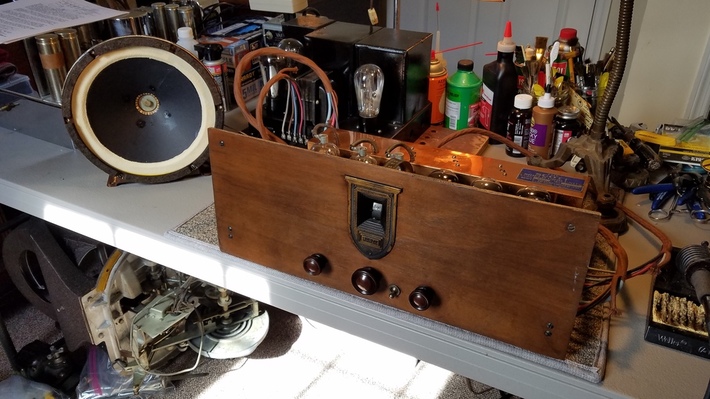 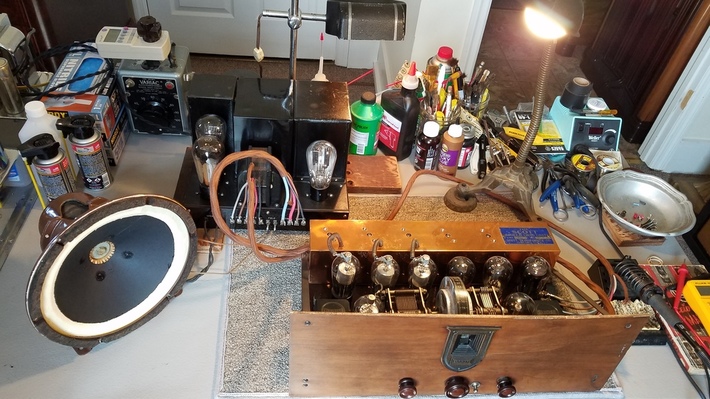 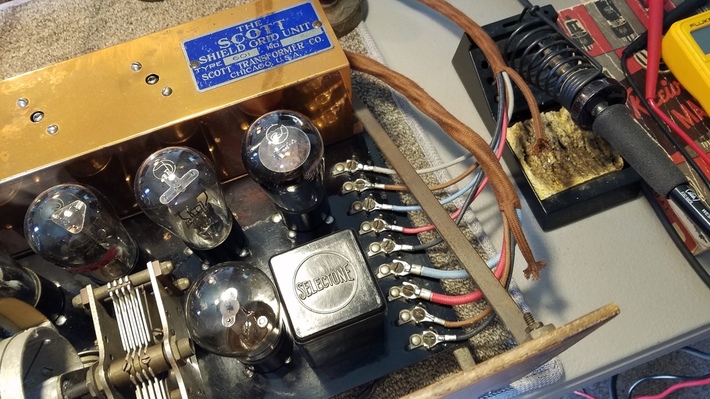 Pictured above is the finished product.  I will conduct a performance test and final alignment of the set this evening.  Please stay tuned as I will be posting a video of the set live in action!

A performance test of this newly restored AC-10 is now complete.  Video link below:

Verdict:  I have touched many pre-war circuits, seen many pre-war sets in action over the years from this time period.  The AC-10 is by far one of the finest late 20's/1930 receiver's I have ever listened to.  I would rate the set near the top in terms of selectivity, sensitivity, and sound quality.  A rather unique set for the 1929-1930 selling year, most receivers offered during this time were of the Neutrodyne or TRF design.  RCA held the Superhet patents during this time frame, and they had full control over whom used it!  Many mass producers including Philco and Zenith during at least these two years were not offering Superhet designs due to the RCA patents and licensing.  I find it interesting E.H. Scott initially bypassed the licensing issue by offering the AC-10 as a kit or contractor building of the receiver through a distribution of "custom builders".  A relatively clever idea at the time, it eventually caught up with Mr. Scott!

This receiver is a broadcast only receiver (missing short wave accessories which were additional cost from E.H. Scott). I was able to pick up all of the major local stations with ease.  Distant stations that are not often heard also came in with ease.  Distant station reception could have been due to ideal atmospheric conditions!  Tuning requires a little extra effort as this set lacks an AVC circuit.  As a result, stations have to be tuned carefully by the main condenser and then trimmed.  Volume can be compensated with the volume control.  All three have to somewhat work in unison so the speaker is not overloaded with distorted sound.  The dial on this machine is labeled only as a scale, so stations have to be logged.

The AC-10 has a rather interesting Superhetrodyne circuit as 4 stages of I.F. are utilized!  Overall performance is superb for a circa 1929-1930 machine.  Despite pre-dating some of E.H. Scott's best years, the AC-10 is still a very special set that goes beyond just the historical factor.  The beautiful layout of the set, polished copper shielding, unique Superhetrodyne circuit, high tube count (11), and powerful push pull 45 output circuit help elevate this set to a position above most all of the competition manufactured during 1929 and 1930.  Performance of the AC-10 is vastly superior to what I have experienced from this era.

I am thankful to have had the opportunity to restore such a fine machine.  What a privilege and honor to have had the chance to work on such a rare machine.  Complete AC-10 examples are rare to come across today.  I want to thank Kent, Dave, and Norman for helping making this set a reality!

I hope you all have enjoyed this restoration.  Please stay tuned for a separate topic discussing the cabinet this AC-10 resides in.

A great restoration and beautiful work and photos for future restorers to follow.

When you have your AC-10 in your Chatham cabinet and speaker mounted, should really sound good.

Wow, you are doing a wonderful restoration.  I have a Peerless cabinet that had an SG9 in it at one time.  The correct holes and a SG9 face plate were with the cabinet.  I look forward to your cabinet restoration.

Thank you for your comments.  I have just completed a post-restoration 20 hour trial run.  The set has been tested and monitored for 20 hours under normal operating conditions.  Everything checks good!  Ready to move into the circa 1929 E.H. Scott radio cabinet.  Stay tuned for a separate cabinet topic!