Now I need to find some tweeters for this thing.  The BOL sitting next to it definitely provides a more balanced high frequency response.

Robert, email me regarding a wood walnut "S" knob pinch style you seek.

Still waiting for some new tubes for the FM but couldn't resist installing it in its rightful place. Sounds even better with the speaker in the cabinet. For the moment, I have the two Philharmonics side by side in the shop. The right one is the Beam of Light Philly I purchased at the Stanton auction last March, the left one is the AM/FM I purchased from Ron. The AM/FM is on the FM band with the converter setting on top allowing me to tune the FM band. 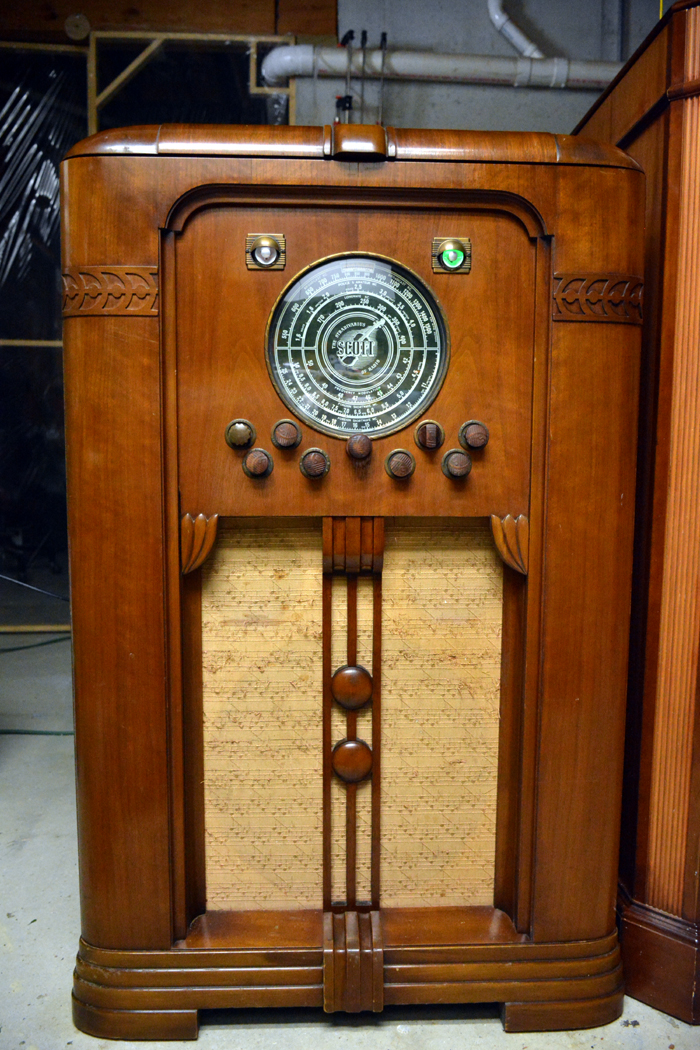 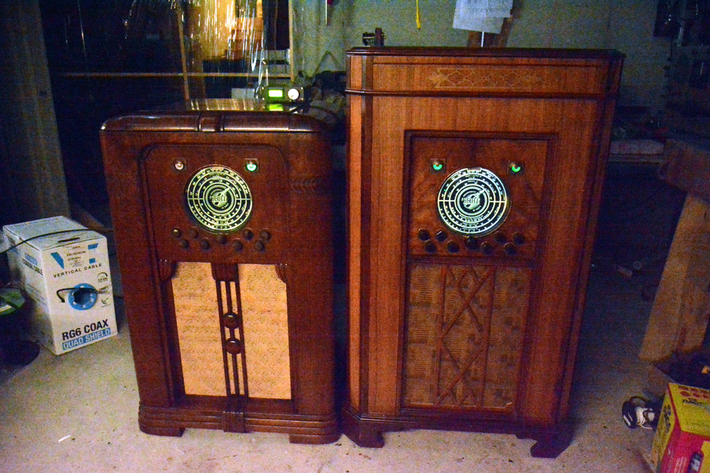 I need one "pinch" type Scott wooden knob for the AM/FM. I hear they are not easy to come by. I may have to steal one from my Scott 16.

I took one picture with the lights dimmed a bit to show off the dials.

Karl, I don't have the equipment to do a scan.  But, if Scott can do that, great.  Otherwise, if I take my BOL apart, I could trace out a template.

Scott or Robert, if either of you could provide a scan or template for me that would be most appreciated. Karl

Thanks Scott.  If no one has a spare that they are willing to part with (and a bottom cover), the scan would be appreciated.  Tt would make matching up the holes a lot easier.  The alternative is to take my BOL apart and use that as the template.  I can probably do that as easily as you can scan the parts!

That shield, or the absence of it, would affect the alignment of the police band since the coils are just below it.  If the police band is tuned without the shield in place and then the bottom cover is installed, it could affect the alignment slightly.  I my case, I don't have the bottom cover either so no change when the radio is sitting on wood!  I would like to obtain the correct pieces.  However, If I have to, I'll make them.

It is the same cover used on all Philharmonics, so no worry about what set it came from.  If you can't find one, I can scan one for reproduction.

The bottom cover shielding the various coils on the right side of the Philly receiver.

Not holes to access some of the padders and trimmers.

Remove this plate to get a couple of the caps for replacement.

Thanks Robert, well then count me in as needing one also!