I re-acquired this wonderful Scott Philly AM/FM BOL in a nice huge 1932 circa 1st year Capehart 300 cabinet. I had sold this radio a few years ago to a big dog private collector over in Davenport Iowa. The history of this set goes back to Norman finding this in a habitat for humanity shop in the Denver area. The shop had asked Norman for an approximate value for them to sell it at. After Norman posted about it here on this forum I ended up buying it and had it shipped via craters and Freighters to me. I hired Bill Liers to go through it and now it's a wonderful powerful player.

Someone did a very nice retrofit of all the Philly components into the cabinet. The 300 series was the upright cabinet version of the more well known 400 series side by side consoles with the turn over record player. On the 300 the RP is in the middle (it's still in there with the motor and shaft and the 15" Scott pedestal speaker and amp are squeezed underneath the RP, no small feat. Ironically the RP is a 2 speed version for both 78 and old 33 RPM. I think these were very rare and later ones were 78 RPM only.

Typical of Capeharts this cabinet is very well made and has beautiful inlays on the insides of the 6 doors and ornate wood scrollwork on the outsides. The top is not hinged like a Scott but thats OK. I had forgotten this Philly still has the VRE built into the chassis. This particular model is serial no BB-443 and has the red TV band on the dial also. 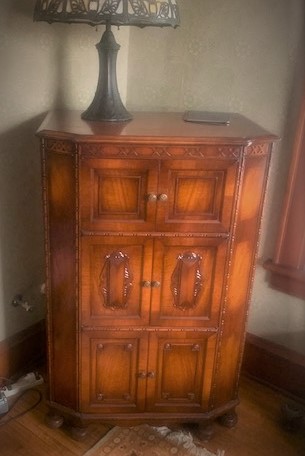 Bruce - The red band on your BOL Philly is probably (like mine) the high frequency AM band needed to receive the pre war audio transmission of TV broadcasts. Pre war TV was in the experimental phase, and the audio was not part of the video signal, but rather was a short wave broadcast by high frequency short wave AM signal. The standard (non-FM) BOL Philly had 30 tubes total. The AM red band is labeled Television and Ultra Short Wave, "Television"  meaning only the audio for TV.

An FM Philharmonic also had the BOL dial but 1) had 33 tubes, 2) dropped the 5 tube volume expander circuit, 3) has a number of small Rectangular IF transformers for FM, 4) and several metal tubes without the usual tube shields. So, it lacked the AM high frequency SW band for pre-war TV audio. The FM band was labeled Frequency Modulation. Still had two magic eyes, one for AM tuning and the other FM tuning (instead of for volume expander intensity).

Talk about having to guess the future when selecting a Scott radio in 1940-41.  The buyer had to choose between static free high quality audio offered by FM or  TV audio on short wave.  Meanwhile, both technologies were mostly available only in select large metropolitan areas circa 1940-41. Turned out neither survived much past the end of WW2. FM radio was reallocated from 42-52 MC to 97-108 MC. And the post war reallocation of TV broadcast channels obsoleted both pre-war TV and the need for radios to receive TV audio when the audio signal became part of the television broadcast for each channel.

Hi Scott-I could be wrong about it being an AM/FM set. I never counted the tubes to tell you the truth and I was surprised to see it had the VRE so it may indeed be an AM/SW 30 tube set. I will take a photo of the dial. I guess I just assumed the red band was the FM band.

I am confused because on one hand Bruce you say this set has the red TV band and that would make it an AM only set with the VRE on the chassis as was the case for all AM only sets.  At the beginning you say it is an AM/FM which does not have the VRE as they need the room for the FM circuity.  The serial number puts it as an AM red dial set.

Nice! Do you have more pictures you can post? Oh and what is VRE?