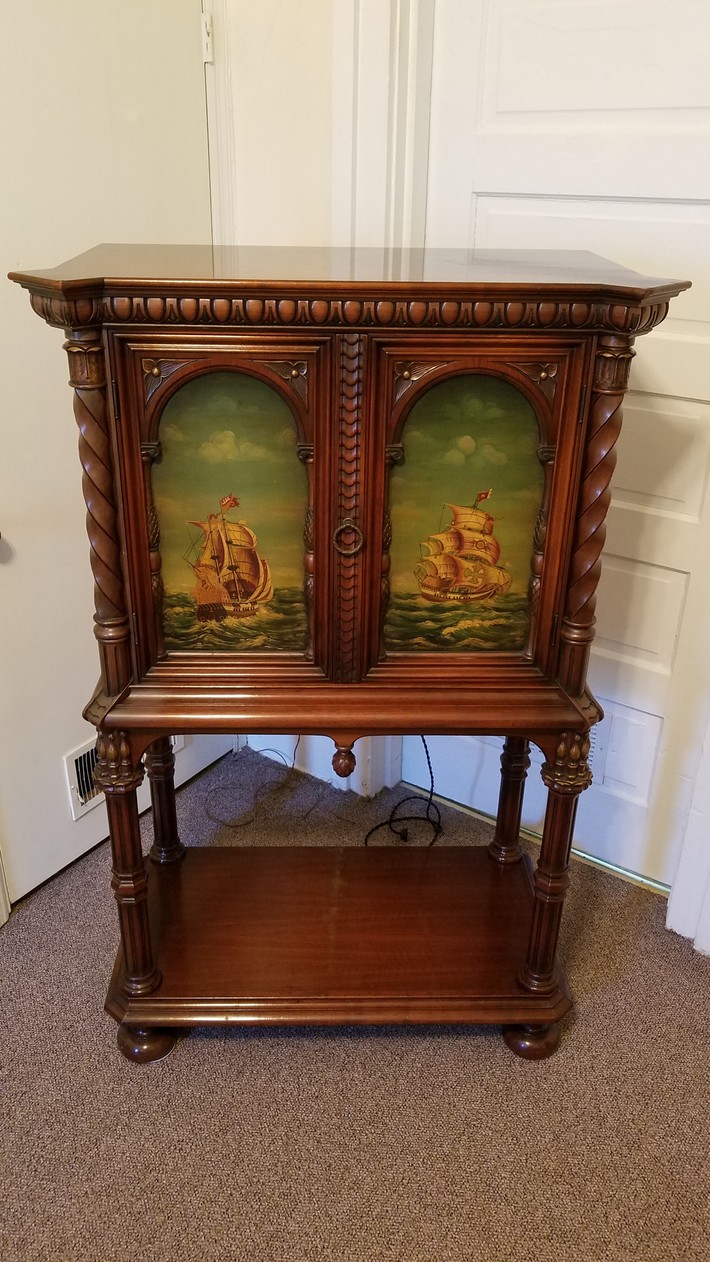 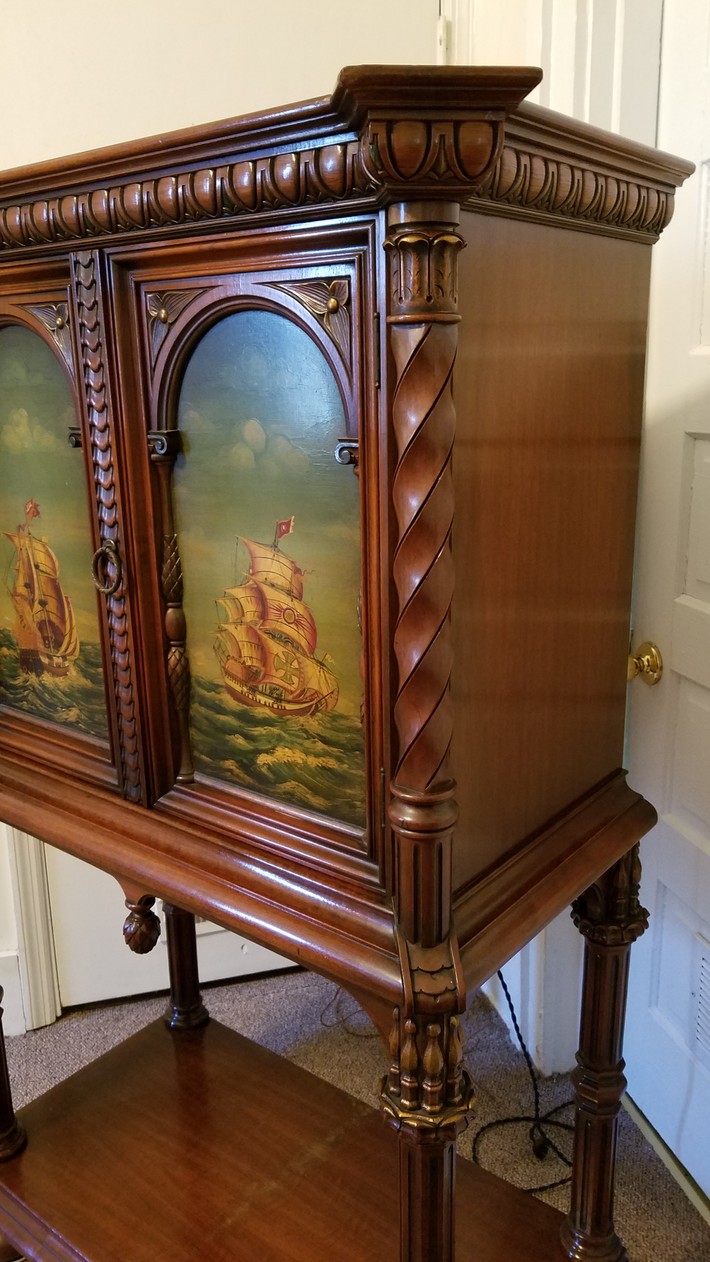 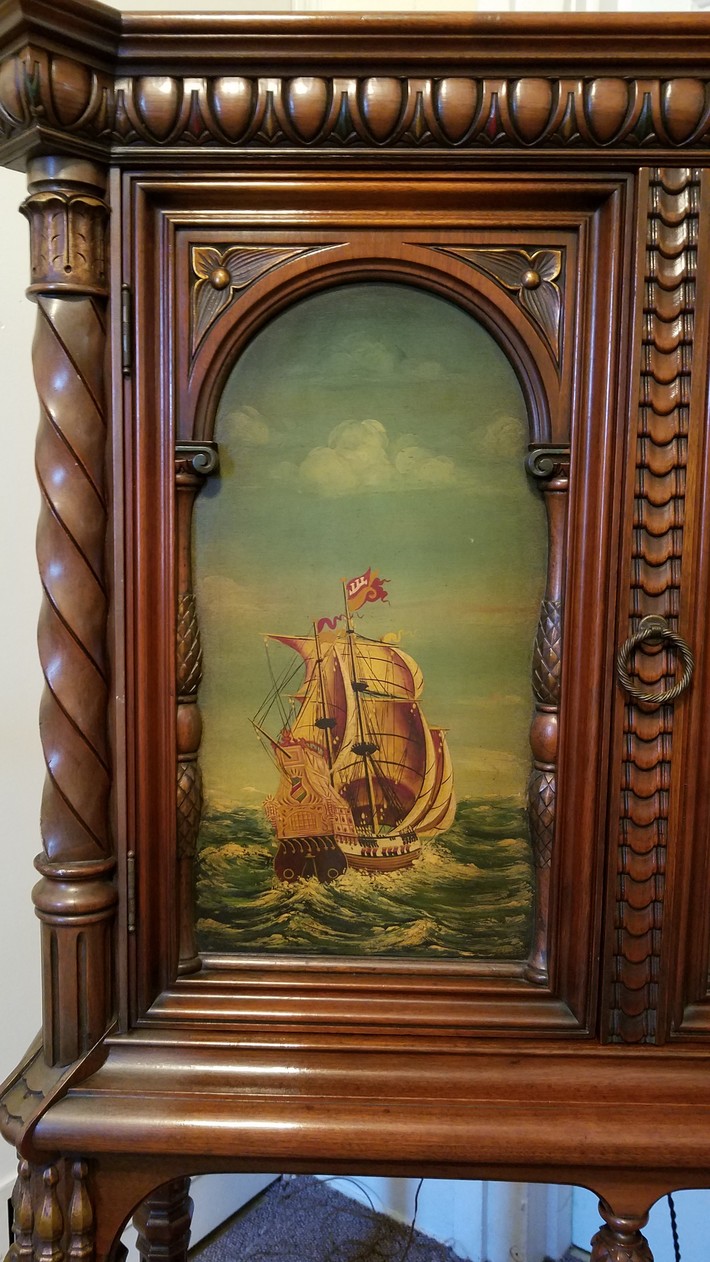 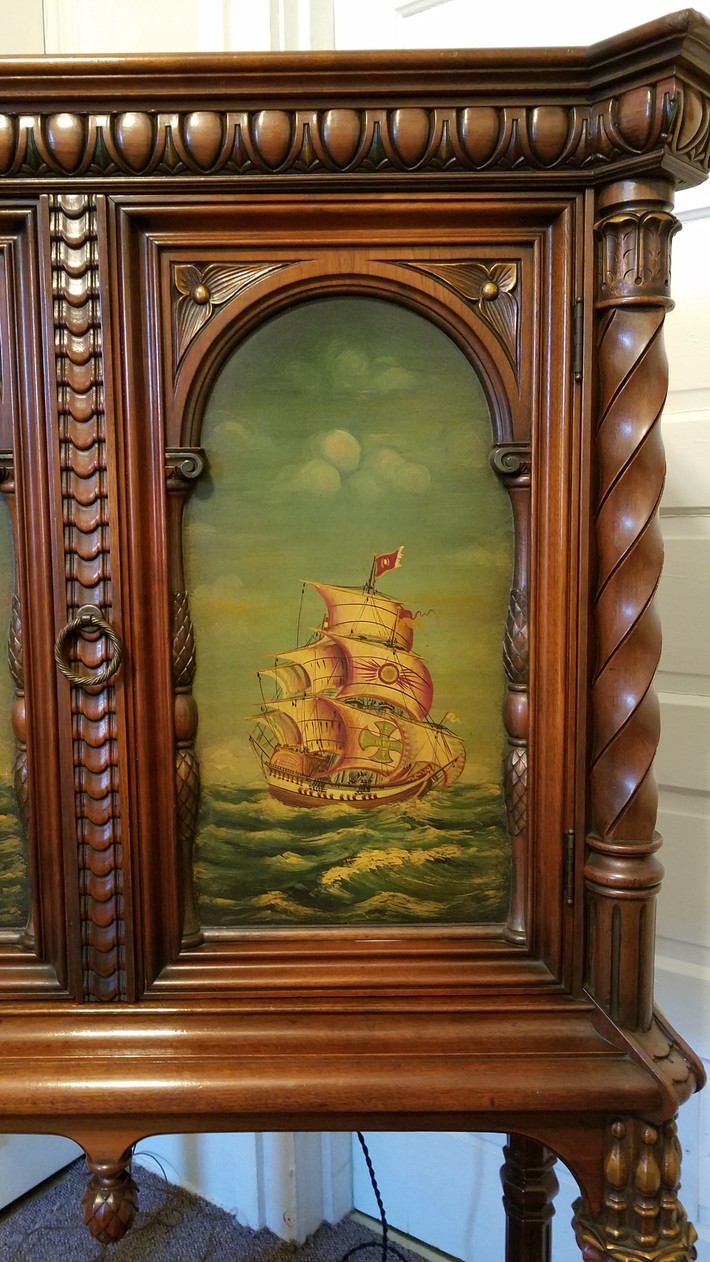 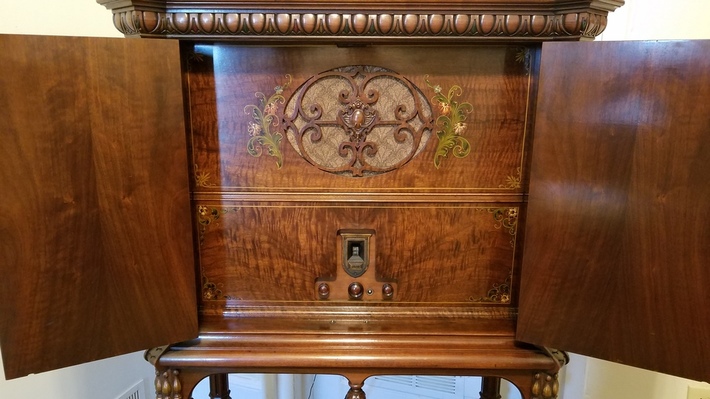 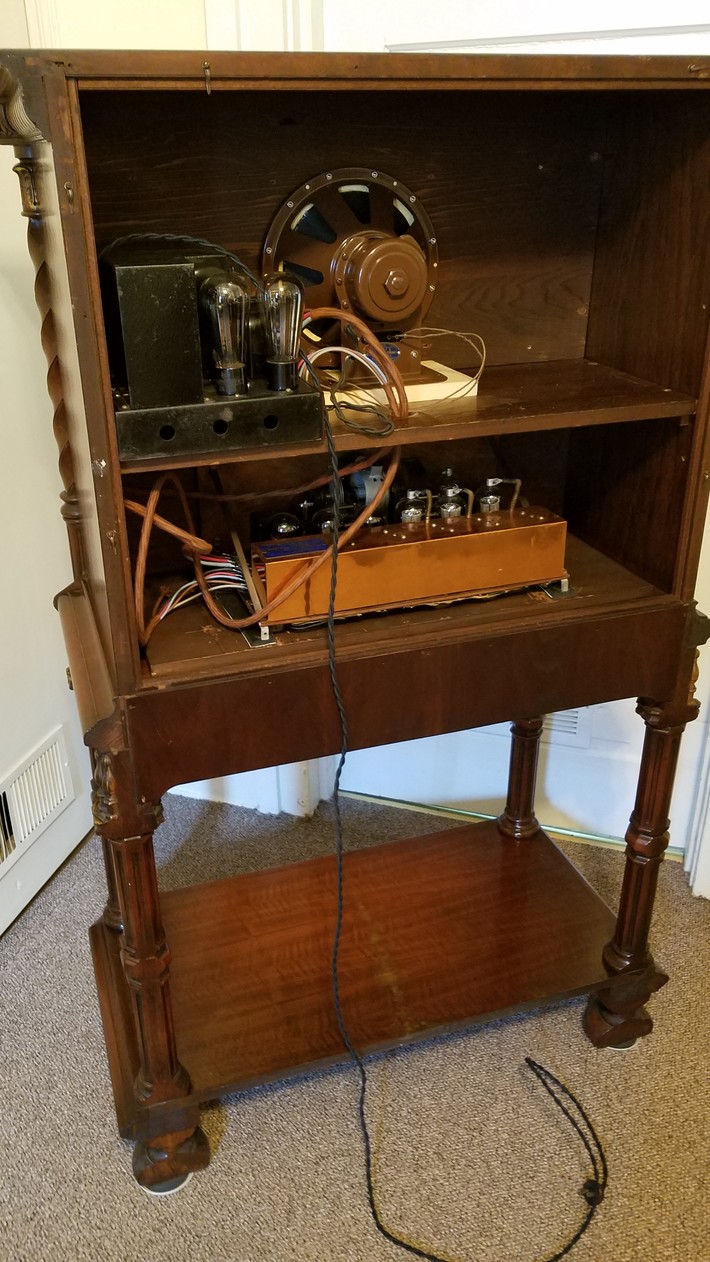 I wanted to share the final installment of a recently completed restoration. Pictured is one very rare E.H. Scott cabinet. So rare that only two are known to exist in collector hands within our present day, this cabinet that second discovery. I discovered this cabinet several years ago. It was in an non-climate controlled garage with other radio sets. Upon my finding it white mold, dust, dirt, and mildew had already settled in long ago. Even a cat had lived inside at one point! Luckily after an intensive and careful disassembly-documentation-cleaning of everything, there is relatively little to no damage these many years later. Cabinet wood finish is original, all painted surfaces as well as the two tall ship oil paintings are perfect. Everything has been so well preserved these many years later, don't ask me how!

The Chatham cabinet was one of E.H. Scott's finest cabinets offered to the wealthy consumer during the years 1929-1930. This cabinet was short lived due to extravagant cost brand new! Very few were ever made during production circa 1929. The serviced/restored AC-10 radio set contained within was added to this cabinet to portray a period example of what the consumer could of purchased brand new. Utilizing period documentation, period Scott brochures, as well as the generous help and contributions from expert E.H. Scott historians/friends and collectors here on this forum, this project quickly became a reality.
Many great thanks to all those whom contributed to making this project a reality!!! 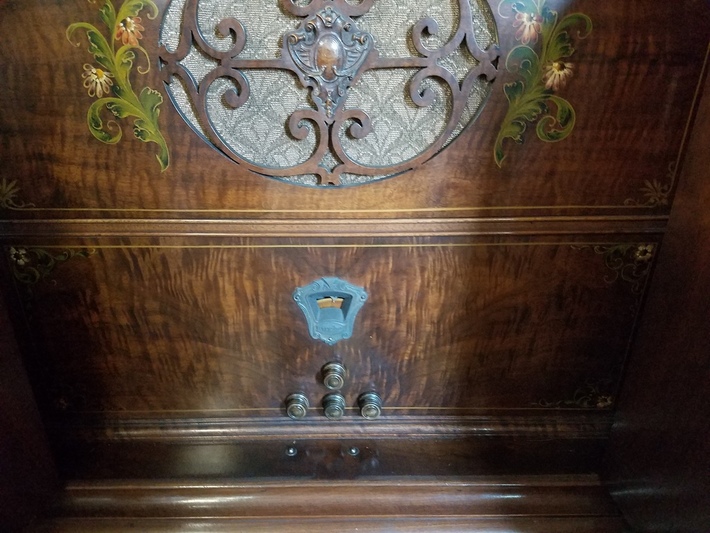 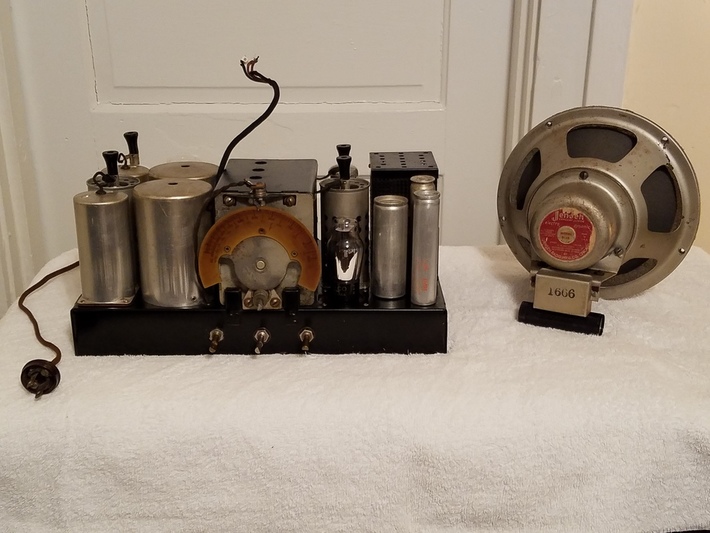 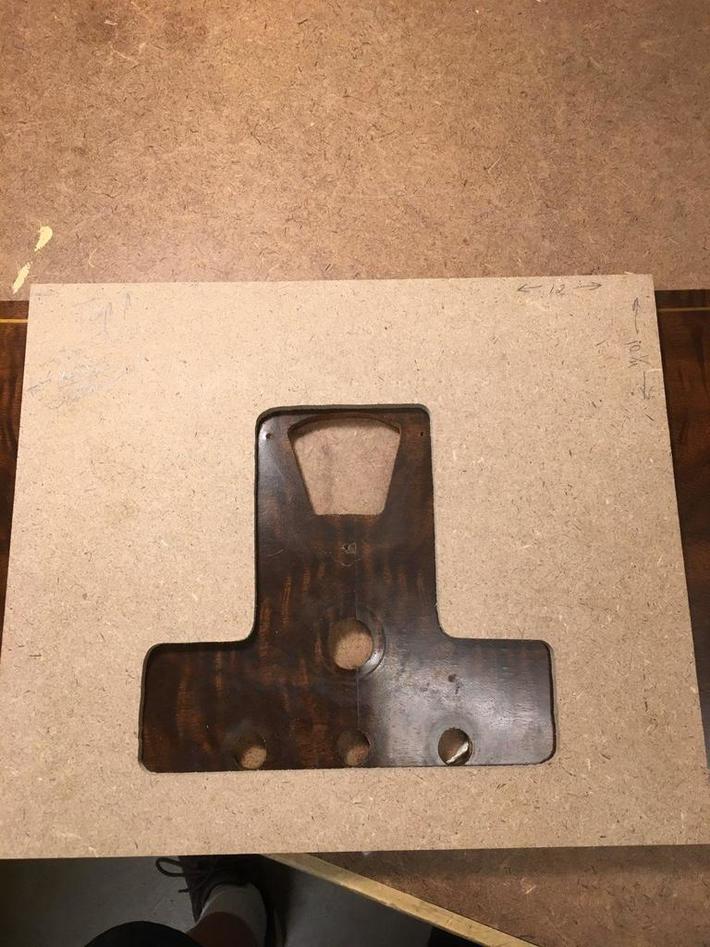 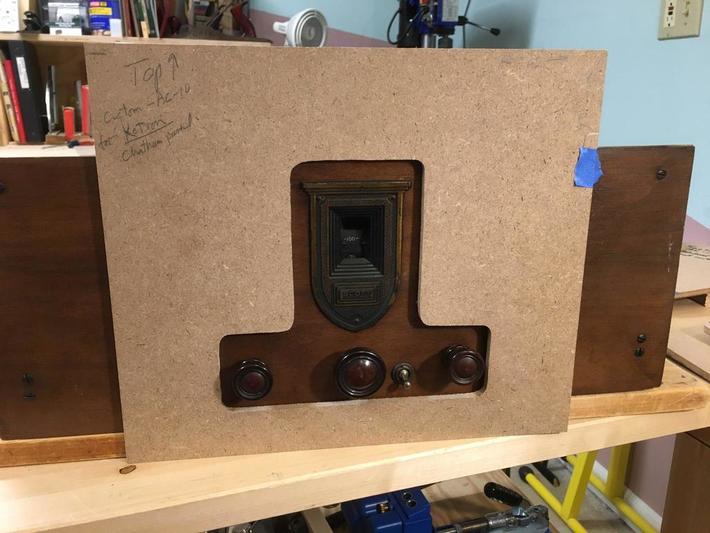 Thanks to the guidance of Norman Braithwaite, Dave Poland, and Kent King we were able to formulate what an original example may have looked like.  Utilizing Dave's original AC-10 Milford panel cutout as a template for this AC-10, Dave was able to re-create what would had been done had this Chatham cabinet been purchased new via E.H. Scott.  I could not have completed this project without Norman, Dave, and Kent's help.  Thank you!  Another good friend of mine whom is not a member of this forum helped with the speaker cone/surround replacement.  Aside from Dave's amazing wood working skills on the cabinet, I performed all cosmetic and electrical work regarding the rest of the restoration.
Art work on this cabinet was completed upon Rockford's manufacturing of the cabinet.  All art work was done by hand, likely by the same artist.  The oil painting of both ships are stunning and truly a piece of art by themselves!  All art work you see above is original to this cabinet, from 1929.  Very well preserved they many years later!!
Extensive research likely indicates that no Chatham cabinets were ever sold by E.H. Scott. This example originally contained an circa 1931 Grebe radio set complete with speaker. The front panel was originally cut for the previous Grebe contained within upon my acquiring of the set several years ago. This is the second E.H. Scott Exotic radio cabinet to had originally contained a Grebe chassis. Another different Exotic cabinet called the Versailles (owned by another fellow enthusiast) also contained an early 1930's Grebe radio chassis upon discovery. It has been formulated that leftover E.H. Scott "Exotic Cabinet" stock was stored via the cabinet producer Rockford Peerless Furniture Co. This stock was later sold at discount to at least one known radio producer: Grebe!