I'm very fortunate to have acquired a Scott Allwave 12 in decent shape.  I believe it is  a "transitional " model.  It has one dial, two speakers,  three 58 tubes and a Wunderlich tube for the detector.

I did find one schematic online but it doesn't seem to match my set.  In particular, the large power resistor (voltage divider?) mounted to the side of the chassis doesn't match .  There are five taps on this large power resistor.   Tap closest to front of chassis is ground.

I really really need a schematic which shows the values of the parts (resistors and capacitors) and possibly a manual.   An electronic scan would be super and I can print it out.

I've posted a few photos of the set.

Someone has removed all the wiring from the original electrolytic caps and there are a few new caps tacked in  various places and two or three other replacement capacitors but pretty much things look original.

I would appreciate any help or advice that can be provided.

You have an early Scott Allwave Deluxe w/ AVC. I had the exact same variation. Good radio!

Yours  is the first of the AVC version, still using the twin speakers (by Rola).   The progression went something like this:

- early 1933  Jensen 12 inch pedistel speaker replaces the twin speakers (these speakers are interchangeable) with 6 pin speaker plug with 5 wire cable, otherwise the same tuner and amp as before.

Go to the Scott document site for diagrams and technical info on your version Deluxe w/ AVC:

go to SET FOLDERS and then select   ALWAVE  DELUXE

Thank you for your helpful descriptions.  My Scott 12 is similar to  the one you describe:

BUT with some differences:   My Jones plug has 8 pins, not six and the large voltage divider resistor has very different measurements from what is published in Riders 3-2 (see my initial post); my set does not have a meter..

Also, can anyone tell me the value of the capacitors mounted in cans on the rear wall of the chassis (see photo)?

Ok - you have added  detail to what I had put together from the several examples I  own now or have owned or seen.  On my 1932 Deluxe (before AVC ) with single Rola comment above, I omitted that it has an 8 pin Jones plug but only 5 wire cable and voltage divider  is relocated to the receiver.  You have a very early AVC example,  confirmed by the small size serial number tag and 2 digit serial number. Do you have a ground post and both black and red antenna posts?  ... and if so, do you have the outboard antenna tuner  (2 controls and mounts to the side of the cabinet)?

Keep in mind Scott was a custom set builder. Most manufactures introduced  new models annually and seldom made running changes.  Scott made  evolutionary improvements to his current models, and only announced new models occasionally, at any time of the year, whenever developments added to tube count.  For example, the Scott Fifteen (early1934- mid 35) has about 8 variations and only 5 factory diagrams located (so far)  as it evolved considerably.

From your additional photos I see the 8 pin plug but see the big voltage divider (looks original) relocated to the receiver.  Are all 8 pins actually connected or do you have a 5  wire cable and 3 unused pins?  I assume no voltage divider in the amp and that your amp has the 6 pin speaker socket. My earlier pre-AVC Deluxe also has the large 8 pin Jones plug but a 5 wire cable to the receiver.  So, I surmise Scott was using up the last of the amp steel chassis on hand that were cut for the larger Jones plug of the prior version amp.

The Riders diagram should agree with your set pretty closely, including the twin speakers  amp diagram. The cap values are stamped into the metal of those bathtub caps riveted to the receiver  chassis - look closely. Careful with the harmful corrosion dust on that metal - wipe it off with damp paper towel and discard it. The figures for  the voltage divider in the diagram are working voltages, not resistance. If you have a bad section on the voltage divider, I can get the resistance value for you. You should go to the Scott Documents site for additional information including owner manuals and also look through the Scott News issues of 1932 and 1933..

Incidentally, your Scott cabinet is the PLYMOUTH.

Thanks again for the additional info.  To answer your questions, the 8-pin Jones plug cable has five wires that exit inside the chassis.  There is NO voltage divider in the amp (see photo...there are also three newer tacked on electrolytic caps under there) and there are two wires which went to an additional? "on-off  switch. That switch, along with the outboard antenna tuner and its two controls were  mounted on the speaker grill in front of the two speakers.  It looks original but I can't be sure.  The black coil which is part of the outboard antenna tuner was lying in the bottom of the cabinet.  I'll have to figure out how it all hooked up eventually.

The chassis does have ground and black and red antenna posts.

The round speaker(s) plug has six pins, two of which are fatter than the others.  The Riders schematic (3-2) does not show values for the field coils or output transformers.

Also, there is a black knob on the rear of the chassis (a pot or rheo)?  I'm not sure what that control is for.

I can see capacitor markings on some of the bathtub caps in the chassis and finally on the ones riveted to the rear wall of the chassis after I wiped off the yellowish powder (cadmium?).  It looks like they are 0.1uF, 200V for those.

The control on the left rear is a simple tone control - reduces the treble typical of early 1930's tone controls.

Scott used a separate on/off switch running from the amp to the side of the cabinet on all chromed models until the late 1930's. Wanted to avoid 60 cycle hum getting into the audio.

Your antenna tuner seems to have been dismantled.

Thanks for the additional information.  It looks like I'm in pretty good shape to begin restoring the set now.  I do have both the partial cover over the coil wheel as well as the full bottom cover.

Is the switch on the side of the amp a second on-off switch?   It seems to function that way but my amp has had some new wiring put in going to the remote on/off switch and also the power cord was replaced with a white power cord which, while functional, just doesn't look right.

I took a closer look at my antenna tuner and it looks like the tabs on the click stop control were all broken off from the black plastic coil.  I can see the remnants both on the switch and the coil where they were broken off.   Was the antenna tuner mostly needed for the shortwave bands and will the set operate reasonably without it  using just a long wire antenna going to the antenna post (black or red ?) on the chassis?

Brown cloth covered line cord is most appropriate for looks for the power cord. And a  3 ft twisted length of black cloth covered hook up wire is appropriate from the amp to the AC switch which mounts in the rear most hole  on the right side of the cabinet. The original switch is a long shank version to accommodate the thickness of the cabinet side. Long shank replacements can be hard to find, and I have successfully restored action of a faulty switch. What or where is the other on/off switch you seem to refer to?  The  front controls: right is volume and the left is multi step sensitivity switch. Refer to the circuit diagrams.

Yours will operate OK with a long wire antenna to the black antenna post. If you can reassemble the outboard antenna tuner, so much the better for short wave reception. They occasionally do show up on ebay. It uses  a 3 wire hook up to the ground and both the black and red antenna posts. Your cabinet should have 2 drilled holes for mounting forward of the AC switch hole. The action of the antenna tuner is dramatic on bringing in a short wave station.  Read through the  Allwave Deluxe manual versions on the Scott document site for the version with twin speakers and this antenna tuner for hook up and operation.

The second switch I was referring to is the toggle switch on the side of the amp.  Is that a second on off switch?

The remote on off switch as well as the two controls for the antenna tuner were mounted through holes drilled through the front grill of the cabinet.  It looks original as there doesn't appear to be any holes in the side of the cabinet.

I have an identical set but in an unknown cabinet with doors. The serial number on mine is F-99 as seen below. I don't know if these numbers were sequential and used different assemblers or ??? 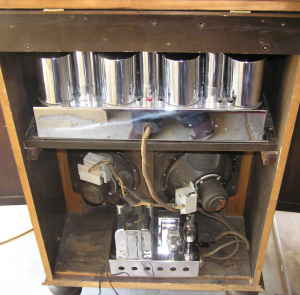 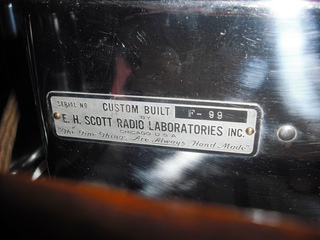 the switch on the end of the amp is the "hi-lo" switch.   Look at the amp circuit diagram.  The primary of the power transformer is tapped near one end of the winding. For household voltage above 115 volts or so, set it to high, meaning higher line voltage. Line voltages varied more back then. Some areas of the country or houses far from the power source or power company sub stations, the line voltage may be lower,  down towards 100 volts. My sets work OK with low household voltages under 100 volts on a Variac, but performance is better at optimal AC voltages, which the hi-low switch helps to provide.  A number of higher quality radios had such a switch.

So unless you have low line voltage in your area, run your radio on the high setting as follows. Carefully watch your tube glow or the dial light brightness - and set the switch for dimmer light level. Purpose is to reduces tube filament stress and keep working voltages a bit lower - for longer tube life. Those 80's and 45's are expensive tubes

Thanks for that clear explanation.  My switch currently is not working.  I'll have to take it apart and clean it up.  That contributed to my confusion about what the switch was for.

Well, I know it's been SIX years but I'm finally ready to recap the chassis.  The schematic I have does NOT show the values of any of the capacitors or resistors.  The schematic in the service manual has some annotation but it is unreadable.   Does anyone have a schematic with values added?

This chassis has all dogbone resistors.  I've found a few where the traditional color code seems to have no relationship to the measured value I am getting.  Prime example: There is a red bodied, yellow end resistor coming from the grid of the second AF tube (56) to ground.  Color code would make it a 2500 ohm resistor but I measure 7800 ohms.  What is correct?  I can't tell since I don't have a labeled schematic.   Can anyone help? (see attached photos).   Also,  the chassis has two electrolytic can capacitors.  The wiring has been removed from the originals.  I see one 10uF replacement which seems to correspond to the 8uF shown in the schematic but I cannot find either a second replacement electrolytic or a second electrolytic in the chassis schematic.

Can anyone help with this problem.

I'm really looking forward to finishing up the work on this set after six years.