Thanks Scott.  On some radios, they are supposed to provide a RF return to ground through the line as well.  Getting rid of them would eliminate the 60 volt AC tickle when touching the chassis and being grounded.

I know my rebuilt 4 unit filter cap was not pretty as yours. But mine is well hidden inside the tuner, hidden by remote control relays. Was a chore to re-install too.

My B+ was reading around 217 volts and I couldn't find anything that was drawing too much current.  That is until I measured the voltage divider resistors that the former tech had installed to replace the candohm.  I had measured the voltages and all were correct except for the 250 volt line. finding no other problem, I finally looked where I should have looked first - the replaced resistors.  The 100 volt tap measured 1000 ohms to ground. It is supposed to be 2200!  So after rebuilding that assembly with proper values, I now have 248 volts and the others are close.  That should make the power transformer happier.  It runs quite warm, but it was running hot.  Then I had to tweak the C voltage divider to get the biases close.  Things are working better.

Did an alignment using the spectrum analyzer.  Interesting to watch the change in waveform as I vary the selectivity control.  Fairly steep sides with a flat top for most of the travel.  When I push it toward widest bandwidth beyond where the phono kicks in and before the radio cuts out,  the waveform gets a bit wacky and I can't get a good compromise.  It's probably not meant to be opened up that far, but I like the tone quality in that position.  Oh well.

I had a problem with loosing all signal when I approached the most selective position.  Turns out I was loosing the signal coming out of the 4th IF.  The negative bias from the pot on the selectivity control was cutting off the 6B8 tube as the  control approached the left extreme. A small resistor across the control mitigated the problem by lowering the maximum bias to allow the tube to amplify.  Until I find a better solution, the resistor will stay!  Suggestions welcome!!!

Tweeter question.  The schematic shows a 2 mfd crossover cap in series with the series connected tweeters.  There is no capacitor on this radio.  I thought maybe it was under the pedestal but there is none. When the tweeters are plugged in, there is a decided drop in volume on the 15" speaker as the tweeters load the output.  The tap on the output was hooked up to the 19 ohm tap when I got the radio.  I moved it to the 38 ohm tap which worked better with just the 15" in the circuit.  I'm going to leave it on the 38 ohm tap but add the 2 mfd cap under the pedestal.  Is this reasonable or is it usual for there not to be the cap in the circuit?  It doesn't seem right to feed the tweeters all of the bass frequencies.  Is it possible these tweeters were added later and they neglected to add the cap?

The 2 MFD cap is mounted on one of the tweeters. So the cap  acts as a low frequency block to allow only higher frequencies to the two PM tweeter's 16 ohm voice coils, which voice coils are in series with the cap. Use a 2 mfd film cap with fairly high voltage reading, say 630 volts.

I have read mis-information that there was crossover in the 15 inch speaker pedestal - not true. The 2 pin tweeter socket is wired in parallel with the main speaker's 38 ohm voice coil. The output transformer is located in the the pedestal, however.

The 15 inch pedestal speaker (1937 to 1940) with its provision for plug-in tweeters, seems to have given way by 1941 to a flange mount with output transformer as the standard 38 ohm speaker, but with no provision for a plug in tweeter set. So by about 1941, to get tweeters for the Philly, one ordered the optional 4 unit high fidelity speaker system first developed in 1940 for the FM Phantom Deluxe. The 4 unit high fidelity speaker system is the same electronically for both the Philly and the Phantom Deluxe. The Phantom Deluxe sometimes had a 12 inch speaker rather than 15 inch, I suspect depending on the cabinet chosen. The crossover also had a small cable plug that fit a small receiver socket wired to the receiver band switch to activate the tweeters on FM band.

The 1941 Scott Laureate also used the same 38 ohm standard speaker or optional high fidelity system either 12 inch or 15 inch flange mount with one to two tweeters. Mine has a single tweeter centered in the 15 inch speaker (coaxial style). Some had field coil tweeters, so the outboard had a rectifier tube to power tweeter field coils.

So, to add tweeters to the later flange mount 15 inch standard 38 ohm Scott speaker, you do not have the convenience of a tweeter socket. So,  use a pair of 16 ohm PM tweeters all in series with a 2 MFD cap - and attach wires to the speaker voice coil terminals of the main speaker terminal strip.

Thanks for the info, David.  There is no  cap mounted on the tweeters.  In fact, measuring the DC resistance at the male tweeter plug gives abut 29 ohms, indicating there is no cap hidden somewhere.  So, I put a cap in the pedestal in the line feeding the tweeter plug. That is making the tweeters do what I expected.  All is well! Sounds great even with the speakers sitting on the bench!

My FM Philly has the plug and switching on the band switch for the tweeters.  Unfortunately, it has no tweeters!  When I get that up and running, I may have to rectify that situation.

As it has a Jones plug fitted it makes it a late Philharmonic addition, it does tie up with my Philly power supply, Scott also fitted similar to the Phantom, I have some documentation for that. 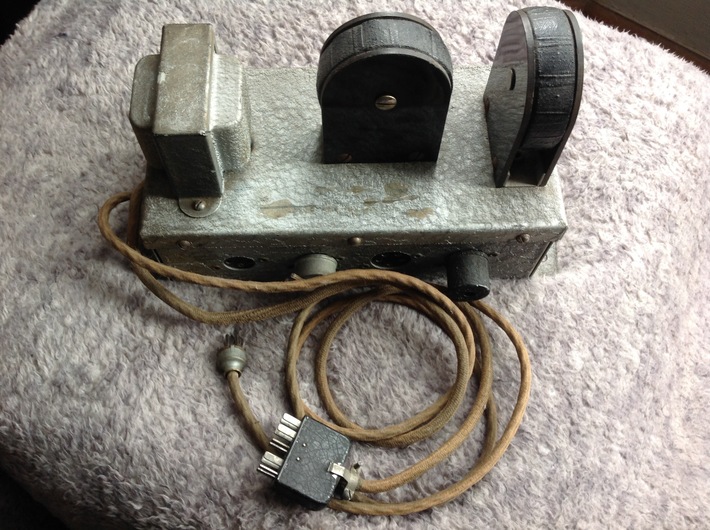 and here is the Schematic 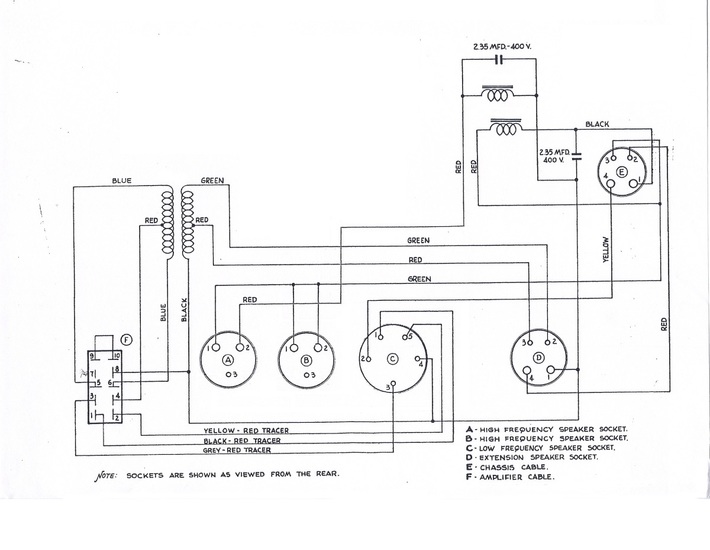 I hope that this is of some use.

Neither my AM/FM Philly, nor this BOL have the Jones plug.  The AM/FM has a small round socket for the tweeters to plug into on the chassis (E??) controlled by the band selector.  When I get the AM FM up and running (the chassis is ready to be re-chromed),  I'll look at adding some sort of tweeter arrangement.  Probably like is on this BOL.  They may not be original tweeters, but something to add some highs.  I have the tweeters hooked up to the BOL and they do add quite a bit.

The BOL has been working for hours now on the bench and it performs quite admirably.  I like it.

For you techies out there:  The 6L6's are biased at about -24volts (-28 volts on the grids and -4 volts on the cathodes). Is that about right?  6L6 tube specs for PP operation in class AB call for about -22 volts.  Raising the bias to -22 volts made no audible difference to my ears.

Oh, and one more question.  My 6L6's are by no means matched.  One pair is much newer and from a different manufacturer than the other pair.  If they were matched (I hate to think of the cost of a matched quad!) how much difference might be able to be heard?

I bought this after I finished the assembly of my philharmonic, the radio is an early chassis matched to a late amp (jones sockets) the tweeters were for fm use and switched off for am, I did install a couple of 8ohm tweeters wired in series through a 2.2uf polypropylene cap. With the fifteen inch bass speaker I think there is a good match,

I did try a set of matched Russian 6L6 tubes, and I can report they work fine.

The change to Jones plugs for the receiver and speaker cables seems to have occurred about mid 1941, about the time the Scott Laureate was introduced. One change with use of the Jones plugs was to run the house AC through both plugs on the way to the receiver power switch - to prevent powering up the radio unless the speaker and receiver were attached to the amp. Makes for a challenge combining Jones and non-Jones items. And the amp's socket holes for the Jones socket are much bigger than for the old style sockets.

-note how the amp's sockets are paired by studying the wiring.

-note the test results for each 6L6  per my Hickok tube tester, and note on a sticker on the tube base.

- pair up the tubes based on the test results, so the sums of each pair are reasonable close.

Mike - Re your diagram - take a good look at your wiring for the Tweeter "B" socket wiring. Really?

Tweeters sockets are wired individually, so none, one or both would work with the main speaker.