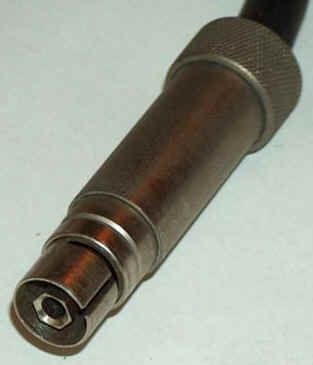 Because of my location I have to use an antenna of my own design. I have 240,000 volt TVA power lines running over my pasture not more than 150 feet from the corner of my house. They generate quite a bit of RF hash that manifests as a 60 cycle buzz at many frequencies across all the bands. I have minimized the problem by designing and using a vertically oriented antenna, which is at 90 degrees to the field of the power lines and so minimizes their influence. It consists of a vertical element of about fifteen feet inside a PVC pipe frame, and a loading coil of about 60 feet of that same wire, wound around the outside of the PVC frame and double insulated with a layer of black electrical tape. The wire is 18 gauge bell wire. There is a brass crew terminal soldered to the bottom of the loading coil to which a lead in 16 gauge stranded copper wire is attached. This lead in goes directly to one side of a lightning arrestor. a lead from my ground stake goes directly to the other side of the lightning arrestor, and then both leads come inside to whatever radio is my "daily driver" at the moment. It seems to work well at minimizing the effects from the power lines. At night, with a decent receiver like my National NC-125, or my RCA  T8-18, I can listen to dozens and dozens of stations all across the AM broadcast band, and many on short wave, including CHU Canada at 3.33 MC, and WWV at 5 and 10 MC clearly.

It looks like it was designed for a long wire antenna, typical impedance about 400 ohms.

The manual does not list an antenna impedance. It says:

A concentric jack J-105 is mounted at the rear of the receiver for antenna and ground connections. A concentric line plug P=101, which mates with the concentric jack is furnished as part of the equipment. The input circuit of the receiver is primarily designed for operation with a separate antenna not used for other equipment. A conventional single wire antenna will suffice. Such  a single wire antenna should be spaced at least six feet away from any parallel stay, mast or stack. It should be well insulated and erected as high as possible. The recommended minimum overall length of the antenna and lead in is fifty feet. The antenna proper should be erected out in the open as much as possible. A one half megohm static drain resistor should be permanently installed between the antenna and ground.

In an installation having a simple antenna-ground combination, solder the antenna lead in to the center pin of the antenna plug P-101, and solder the ground lead to the shell of this plug. CAUTION: BEFORE CONNECTING A GROUND OF ANY KIND MAKE SURE THAT THE POWER PLUG IS PROPERLY POLARIZED, see par. 14.1"

It is pretty clear that the radio is intended to be connected to separate lead ins for antenna and ground, which is EXACTLY what I have. I plan to connect a PL-259 to a two screw terminal strip, with a 500 K resistor soldered between the center and shell as described., and use it with my present antenna and ground.

Do we know what the input impedance of this set is?  A PL-259 UHF connector typically accepts coax with a low impedance of 50 ohms or so depending on the coax used.