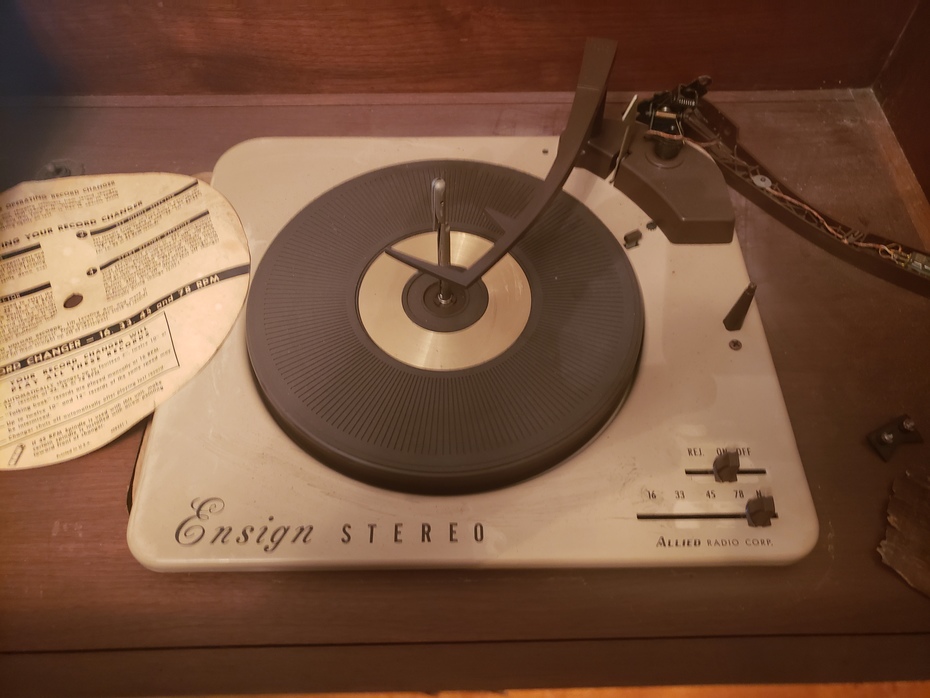 Phonograph as found. based on cutout set did not have phone from new. Looks to be factory power switch in far upper left corner.

Appears you have an AW-15 in the Imperial Grande console. The usual changer for the AW-12, 15 and early AW-23 was the Scott Automatic 10 (really a Capehart Model 10-12) which is in Riders). A two speed changer:  78 and also 33 (33 was primarily for talking books and also a home recording speed - the relatively heavy pickup and needle would wreck a modern 33 RPM record.) My Scott Automatic 10 changer is pictured in the Scott Collectors Guide 2nd Edition on page 112.

For the 2-DIAL, AW-12, AW-15 and early 5 knob AW-23, the phono post is jumpered to ground post for radio reception, except when a phono is used, as per respective Scott instruction manuals. Connecting the phono cable replaces the jumper wire, thus feeding the audio on the aforementioned Scott models into the CATHODE circuit of either the 2 nd detector or first audio tube, depending on the Scott model. So, some kind of Radio/Phono switch is required to bypass phonograph cable to resume radio operation. Also, it is beneficial to move the band switch half way between band position to silence faint radio reception.

On several of my early Scotts, I use a female stereo mini jack on a coax cable, the type of mini jack the shorts until I insert a stereo mini plug into the jack, to conveniently play an FM tuner or CD player into the PHONO input. Your toggle switch may be to short out the phono cable to enable radio reception.

Beginning with 1936 with the 7 knob AW-23, subsequent Scott receivers had a true internal radio/phono switch that switched the phono terminal into the audio GRID circuit ahead of the volume control.

The Allied phono has already found a new home. Have a later1930s Scott phono, that would not be correct either. No plan for phono yet.

Allied’s Ensign series was built by VOICE OF MUSIC. (VM).

Allied’s Ensign series was built by VM (voice of music).