The entire chassis is now ready for re-plating.  I'll wait until I get the amp/ps parts back from the plater to check on the quality.  Probably a couple of weeks. 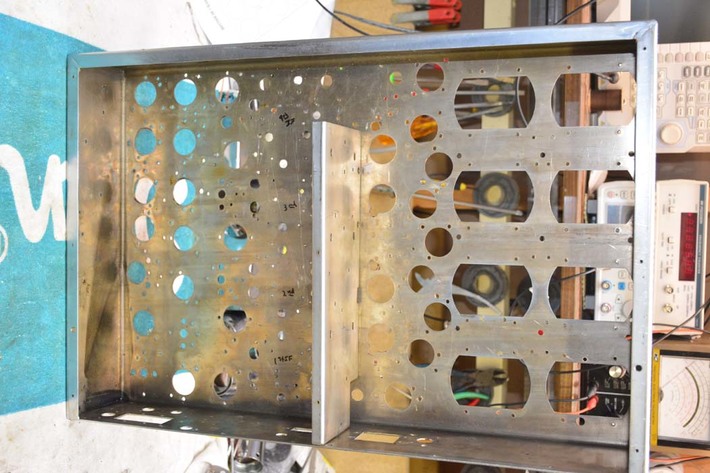 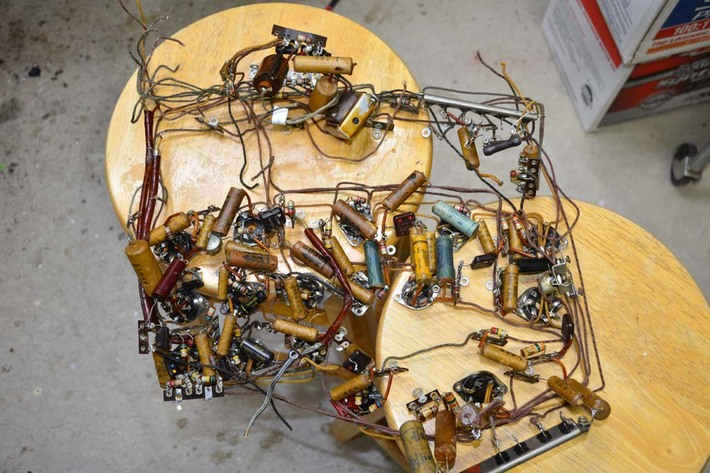 Committed. The easy side has been stripped. 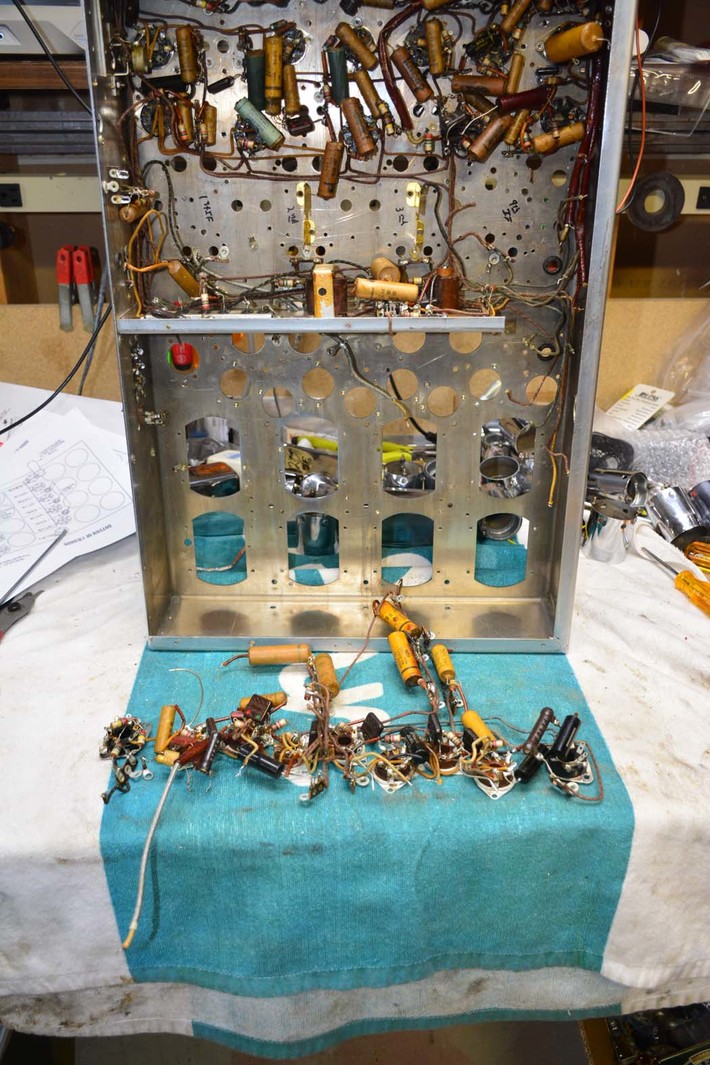 Yes, the plug connects to the final wafer on the band switch.  When I said no connection, I meant there was no connection to the electronics of the tuner.  Too bad this one doesn't have the expanded audio system!

Robert - after reading your comment above:  To further clarify, your receiver's small socket does not power tweeters. Rather, it connects to a special wafer on the band switch to control the tweeters of the optional high fidelity speaker system. The crossover has the output transformer to feed audio sockets for the main flange mount 8 ohm main speaker and 1 or 2 tweeters, each with its own small plug.  The main flange mount 15 inch speaker is 8 ohm, not 38 ohm like your pedestal speaker. The tweeters (each with its own plug) connect to the crossover and function depending on the band switch position.

In contrast, your current 15 inch "standard' pedestal (38 ohm) speaker can not function with the above optional 4 unit high fidelity speaker with its outboard crossover.  You would not have a cable to your receiver's small socket. Your pedestal speaker should have a 2 pin socket on the pedestal base for the optional 1937 to mid 1940 tweeter set consisting of a 2 MFD cap and two PM tweeters wired in series, which tweeters are always "on".

Whoever originally ordered your FM Philharmonic evidently decided against the optional high fidelity system and just took the standard speaker usually seen on the non-FM Philharmonic.

David, Thanks for the info. Since this one has the phono strip, the socket is for the tweeters that I don't have.  This makes perfect sense since there are no connections to the tuner itself.  That's what was confusing me and I either missed or it's not in the instruction manual.

Scott, that looks great and is how I would like this one to look.  That's how my 16 turned out and there is satisfaction in looking at it.  I didn't do the coil shields on the 16 as my chrome shop (now out of business) wouldn't touch them.  If the shop I sent my amp/ps to does a good job on the driver transformer cover, I may send all of the 16's coil covers to them.  Also, yes, I would love to have your refined schematics.  I have the AM/FM schematics out of Riders from a good scan.  I printed them out over 3 sheets of paper, matched up and taped up.  Makes it much easier to mark reconstruction progress on.  I would be happy to document any changes I find.  As I said previously, I did find one.

Norman, These Philharmonics have well over 100 rivets.  Have fun with yours!  I will probably keep this radio, especially since I will have far more into it than it is worth.  I think it will become my showpiece.  That being said, I'm leaning toward making it shine!

I haven't rechromed a Philharmonic yet but I did rechrome a Scott Special Communications Receiver which in some ways is more difficult.  When I have time, I hope to rechrome a remote control pointer dial Philharmonic chassis.

I can send you my redraw of the AM/FM schematic on an 18"x24" print if you would promise to mark up any changes you find and mail it back to me when you are done.  (You can keep a copy for yourself) I did this 9 years ago and it is far from polished unlike my AM Philharmonic schematics, rather it is a strait copy of the published schematic.  It is still far easier to work off of.  Maybe in the future I can update this schematic like the AM's.  Here is a sample of it:

Below is a cut from the AM's, and you can see that it is quite refined.

"A couple of questions for you collectors out there. Stripping this chassis for the plating shop is a MAJOR undertaking, let alone getting it back together again. Here are a couple of photos of chassis. How many of you would go through the trouble? How does this much rust affect collect-ability?"

Sure is.  The AM's are bad enough, but I would never do this for an AM/FM.  As for collectability,  your set does not look bad at all.  A rechrome might increase the value a couple of hundred bucks if your tube/coil shields are not done.  If the tube shields are done, figure $1500 for the chassis.  I am basing that on a complete rechrome that sold a few years ago on Ebay, and it ended up sitting a short while and getting a "best offer" deal.   You would only do this because you love the set and would never part with it...

This one was a rust bucket that I saved.  Taking my sweet old time getting it done as there are many other projects that were already in the queue.

Trace your small socket to be sure, but the small socket should be for use with the optional 4 unit high fidelity speaker system introduced in 1940. This socket for your FM Philly is wired to the band switch, to turn "on" the tweeters for FM band, or rather, to turn the tweeters off on AM and SW. Don't know yet if tweeters functioned on Phono.

Note- your Scott standard speaker has a 38 ohm voice coil, and is not compatible with the crossover speaker system. But you could wire earlier PM tweeter pair (about 16 ohm each) in series with a 2 MFD cap to the standard speaker's VC, like in 1937-39 Philharmonics.

To elaborate, the optional speaker system crossover has a cable to the amp speaker socket, holds the output transformer and all 3 speakers plug into the crossover.  The crossover has a second cable with small 4 pin plug that fits the 4 pin socket on the on the back of the 1940 or later Philharmonic (or Phantom Deluxe). Even the non-FM sets of1940-41 seem to have the same small socket for the optional speaker system as long as there is a separate phono terminal strip.

Before the optional 4 unit high fidelity speaker system was introduced mid 1940,  the same style small receiver socket was used for the phono input for a couple years. For 1937-1941 remote control Philharmonics (as near as I can tell), the remote key pad could switch the receiver between radio and phono input, change volume, and, for specially optioned record changers 1937 to 1940, could start the phonograph or reject a record.  It is safe to say, if the receiver has a separate terminal strip marked for Phono, the small socket is for the optional speaker system. Seems, if the receiver lacks a separate phono terminal strip, then the small 4 (or 5) pin socket is the phono socket.

Keep in mind, Scott was a custom set builder, built each upon receipt of an order and made running changes to radio designs. I am currently restoring my first remote control Scott (a 1939 Phantom Deluxe) and have a 1940 remote control Philharmonic to restore as well  ....  and have an an optional speaker system to try out which should settle some questions I have.

A couple of questions for you collectors out there.  Stripping this chassis for the plating shop is a MAJOR undertaking, let alone getting it back together again.  Here are a couple of photos of chassis. How many of you would go through the trouble?  How does this much rust affect collect-ability?

Also, can anyone explain the 4 pin "network" socket on the back?