Been a variety of threads here mentioning tweeters. And now on ARF, a growing thread on AW-23 tweeters.

Thought a separate tweeter thread here on the Scott site might be useful for newer Scott owners.

- Scott first offered optional tweeters in 1935 with the introduction of the early 5 knob  AW-23  on account of a few new experimental wide band high fidelity AM radio stations at the top of the broadcast band - in a handful of major cities like Chicago. The 12 inch Magnavox 38 ohm pedestal speaker had provision for a pair of field coil tweeters via a 5 pin socket on the speaker pedestal. The tweeters were wired in series with a "Y" cable and a 2 MFD cap to limit low frequencies and favoring higher frequencies to the Q4 series tweeters #7077A and #7078A .

- Effective January 1936, Scott revised the speaker(s) in conjunction with other changes for the introduction of the 7 knob AW-23 model produced well into late 1937. The revised Magnavox 12 inch pedestal has a gray color cone, a 19 ohm voice coil and revised terminal board behind the little cover. The revised optional field coil tweeters are Q4 series tweeters #8685A and #8686A. Same field coils but different voice coils.

- The PHILHARMONIC introduced Spring 1937, offered an optional tweeter pair  with permanent magnets, no field coils. Initially they look just like the silver painted AW-23 tweeters and were also wired in series on a "Y" cable with a 2 MFD cap but had a 2 pin plug for the 2 pin socket on the 15 inch 38 ohm speaker pedestal base.

- There may have been an appearance change to bullet shaped tweeter covers before 1940. Until 1940, no other Scott model was offered tweeters but the AW-23 and Philharmonic.

-The new optional 4 unit high fidelity speaker system had an outboard crossover with the output transformer to drive all speakers, each with 8 ohm voice coils. (Documented in Riders Vol 14 under Scott.) The tweeters each had a 2 pin plug, no longer in series on a "Y" cable. The crossover was more sophisticated with large caps and top mounted inductors. Also had a jumper plug to be repurposed for an auxiliary/remote speaker if desired. Only the main speaker had a field coil which was fed B+ via the crossover.   The crossover had a small 4 pin cable to the receiver for the band switch to limit tweeter operation to the FM band only. Appears the Phantom and Philharmonic used the the same 4 unit high fidelity system, although the Phantom received a 12 inch speaker flange mount while the Philharmonic, a 15 inch. Both the 12 and 15 inch main speakers were 8 ohm and had a "High Fidelity" sticker and no output transformer attched.

-to add confusion - I recently acquired an FM Phantom that had been housed in a phono combo credenza cabinet and optional 4 unit speaker system. The main speaker was 15 inch, not 12.  The crossover also has the 35Z5 rectifier and the two tweeters had field coils and 4 pin plugs. The radio used Jones plugs for both set and speaker cables. Evidently late production, possibly even early 1942 when materials were getting redirected for the war and Scott was assembling his last civilian radios.

-The 1941 FM/AM/SW Scott Laureate was offered a 12 inch standard speaker or the optional high fidelity speaker system, same crossover as my FM Phantom but with only one tweeter which was center mounted in a  15 inch speaker, thus a co-axial.  Laureates were always fitted with Jones plugs for the set and speaker cables. My example has a same crossover with the same 35Z3 rectifier to power the field coil of the single tweeter (4 pin plug), and 2nd tweeter socked is unused. Same cable to receiver for band switch to control when the tweeter was active.

-I suspect there are some late Philharmonic examples equipped with Jones Plugs and maybe with the optional speaker system using field coil tweeters. Speak up if you have one.

- The post war 800B  coax speaker was much like the prewar Laureate coaxial but the crossover function was not by outboard crossover. The 800B tweeter is switched off on AM and SW bands.

I pulled the tweeters from early and late versions of the Full Range High Fidelity receivers and measured the DC resistance of the tweeter voice coils.  They are all 12.5-ohms +/- 0.5-ohms, early and late.  It appears that Scott did not change voice coils in the tweeters when making the change to voice coil impedance of the woofer.  There was a change to the plug and socket at the tweeters that would justify a change in product number.  The plugs and sockets are not compatible.  This being the case, as long as you have a Y-cable compatible with the tweeter set, you may use either the early or late tweeter set on either the early or late version receiver.

Had an inquiry a few days ago on the later optional high fidelity speaker system of  1940 into 1942.

Re-reading my original commentary above, one important correction. in concurrence with Norman;s comment above, the tweeters have 16 ohm voice coils (DC resistance about 12 ohms), not 8 ohm as I had stated.

To further clarify the reference material source I found, see Riders Vol 14 for the Scott's optional high fidelity speaker system is under FM Combination - study both page 12 and page 14. Page 14 includes the only reference for the Jones Plug speaker version that I know of, other than the Scott Laureate section in both Riders 14 and Riders Vol 15

An alternative to Scott labeled PM tweeters, other 16 ohm tweeters appear on eBay from time to time for far less cost than the proper and rare Scott tweeter. Not sure about suitable wattage rating however (and the eBay descriptions seldom state  wattage anyway), so, I would stick with Jensen or other quality brands that may have come from higher power multi speaker systems.  Coming up with the small 2 pin plug to fit the crossover be a challenge however and you may have to fashion a substitute.

Thanks for this David,

I have found the correct pages from the Riders manuals, the first is here, and the second is here, 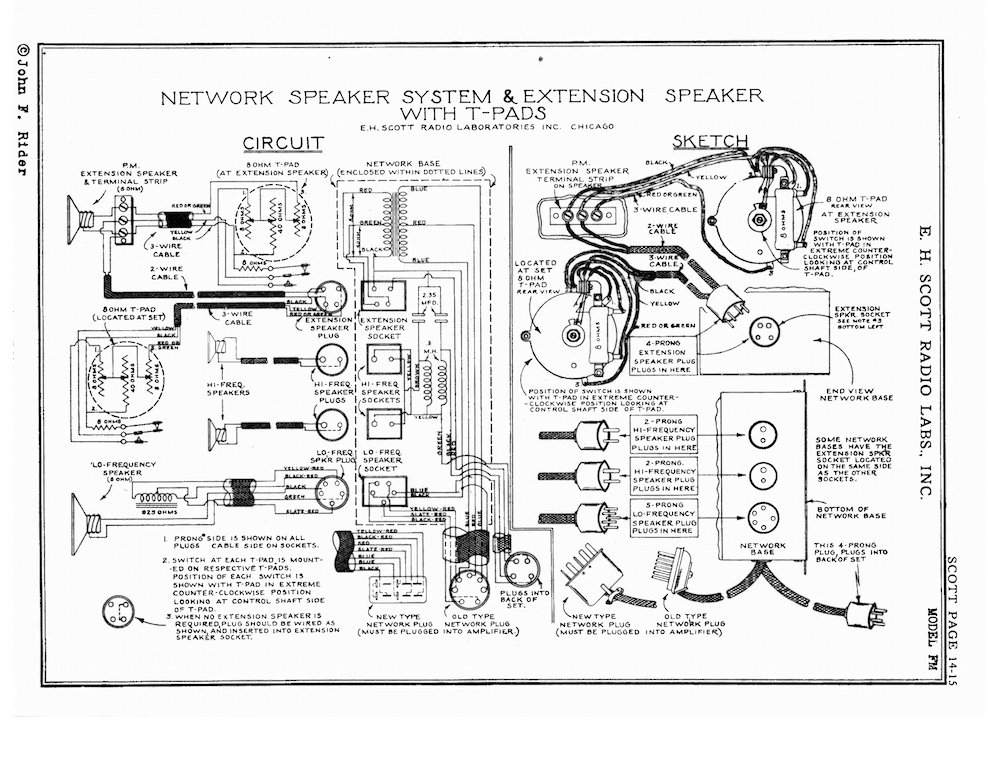 both of these diagrams tie in with the crossover I have, particularly the complete fm one as there is the extra cable to turn the tweeters on during FM reception, and the later Jones plug

here is my crossover, my only comment is that the transformer appears to be a little small for the 40 or so watts that the Philharmonic can provide, but then who would want to run the radio at this volume,

Mike - you have the early version crossover. The silver painted output transformer to the left drives all speakers. The black plug to the right is a required jumper available for rewire for a remote/auxiliary speaker. The crossover supports one or two separate 16 ohm tweeters. The small 5 pin socket to the left is for  15 (or 12) inch main/woofer with 8 ohm voice coil. The other 3 pins of the 5 pin socket is for the speaker's tapped high voltage field coil. The 12 pin Jones plug includes 2 pins as a jumper ahead of the receiver on/off switch to prevent powering up the set without a speaker.

Mike, I did respond to your private inquiry a few days ago, but not sure if you received my reply. Prompted my response yesterday on this speaker thread.

The later version Scott crossover - below link - is somewhat smaller with a more modern appearance.

This newer version crossover is seen both with and without a 35Z3 rectifier tube. The tube version powers tweeter field coils, so has 4 pin tweeter sockets on the crossover. The other version with no rectifier tube  has 2 pin tweeter sockets. Note this crossover has an additional smaller cable with a small round 4 pin plug, which fits a small round 4 pin socket on the back of 1940-41 FM Philharmonic,  FM Phantoms and the 1941 Scott Laureate, which plug wiring runs to a wafer on the band switch to connect the tweeters when on the FM band.

Although the Scott Laureate announced August 1941 sported Jones plugs, it appears The Philharmonic and Phantoms were changed over to Jones plugs later in 1941

Caution:  A standard (non-FM) version of these models 1940-41 may have a similar small socket on the back of the receiver which may be for phono input instead, so, trace out the small socket on a non-FM models to determine the socket purpose. I have an unrestored AM/SW Philharmonic of about 1940 with a small socket and small crossover cable plug fits it, but it appears to be the phono input socket.