Merle Jones said…
Hello Kent, long time since we've last spoke. Thanks for the invite. I look forward to conversing with you and all the other Scott collectors and seeing their nice radios. -Merle

In a post you mentioned having a check list for the allwave 23. Is there a link to that here?

Having a new transformer made and want to be sure everything else is good. The power supply had been re capped at some point. Haven't looked at the main chassis yet except to determine that it needed one tube which I have replaced. I have the operation and service manuals coming from Great Northern.

Kent.....thank you..... I would love more information on the Sheraton cabinet with a Laureate chassis  - if you could provide some PDF's that would be wonderful.  This has been sitting in the corner of my Great Grandfathers cabin ever since I was young.....I never realized what it was until last summer when I uncovered it and looked at it....but I finally took some pictures so I could ask about it.  Thank you again for your time.....I may bug you again with a few more questions when I take a look at it closer this Spring when I am up North at the cabin!  Renee:).   If you'd like to email the PDF's my e-mail is renee54636@charter.net   Thanks:)

Kent, got a quick question.  In photos 19 thru 24 of your photos, what is that device?  I have something like that has either 5 or 6 of those tubes.

That is the Scott FM converter...it changes 88-108 FM down to 42-50 so that the older FM tuners could receive the modern band established post-war. The 717A tubes are used in a number of higher frequency applications. If your device has 5 or 6 of them, it could be most anything....

I'll have to dig it out of the garage tomorrow.  Maybe I can find out more info from google, now what I know it is.

I am not sure what to do with this one.  I thought I may be able
to strip it and re-crome, but that would stretch my abilities quite a bit.
I'm sure I  could get it to work if it was just a re-capp and resistor/coil
check, its not so difficult electrically. All the parts are there. The cabinet is nice, the original owner stripped it so it just needs a refinish.  I really don’t want to pay
much for a good chassis, so I am not sure what to do.  I'll have to check
the serial number and get back to you.

I would like the serial number for my research. Actually, rechroming a 23 will probably cost as much (if not more) than locating a nice chassis....so it you want to get it operating, I'd say "Go for it". You are right, even if it isn't pretty, you will be able to make it play, and it will sound great. It's worth the effort! If you need anything along the way, just ask, folks here are always glad to help!

Working on pics and serial #'s, but what is meant by the term "Serbs"?

I have been cleaning up the schematic for the early (Feb. 1946) schematics for the 800B. Here are those two pages. I am working on another page that combines the radio tuner circuit and the electric tuning circuit on one page. The paper size is printable on 11 X 17 inch paper for the two files included here.

I will be working on the late 800B schematics as time permits.

That's great...when you get them done, I will post them in the archive if you are willing. All such work helps everyone here. That is what this forum is all about!

Yes I am willing to contribute these for fellow members and others use. I enjoy doing this type of work. I was originally in product documentation at Collins Radio which included doing schematics.

Thanks you! I have added your cleaned up diagrams to the Scott Info Archive 800B folder. Your work is greatly appreciated!

I took a closer look at the Late 800B parts radio tuner chassis that I have. It is SN 6182 and I found its final test stamp inside the preset tuning assembly backplate and the date is Jan 15, 1947. So that one can be added to your database.

I took the time to take a good photo of the Late version 800B AM SW RF compartment underneath. This unit has never had any parts replaced in that area, so this part of it is unmolested. I had just noticed that the Early version SN 1035 that I have had already been worked on and there were some changes to bypass capacitor placement that I do not agree with. My intent is to put it back as close to original lead dress and parts placement as possible. Sometimes changes in part placement and lead dress can cause significant problems to develop and result in inability to properly align RF circuits. 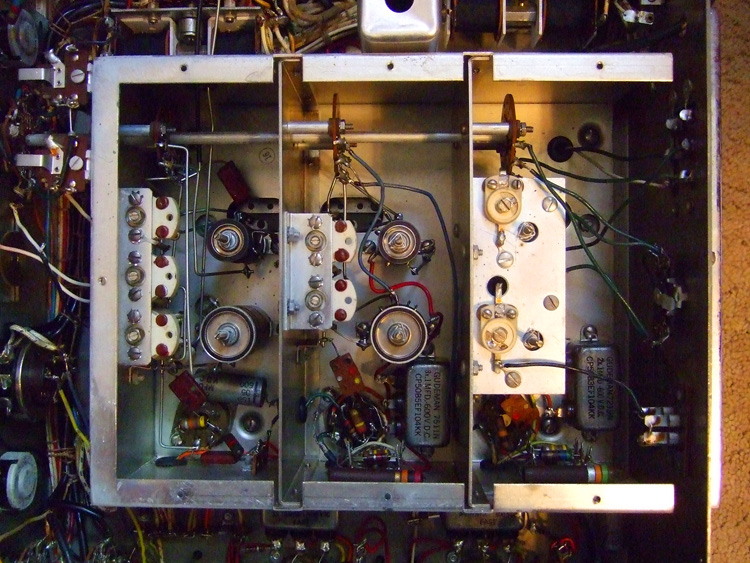 I hope this attachment works. I finished the composite figures 26 and 30 for the Late version 800B. I found this helpful in tracing out the electric tuning arrangement of the 800B receivers.

If this turns out to not be satisfactory resolution and detail, let me know and I will try sending the *.pdf file which is 5.3MB.

that image is great! I will add it to the archive. Thank you!

I'm Keen to get a copy or the collectors guide

However I would need it shipped to NZ

Got any ideas as to. How I can get one

I've just signed up to pay pal if that helps