I am in the process of making an adapter for my early Philharmonic radio to fit a late type chassis, the radio has a 7 pin plug, and the chassis is fitted with a 9 way jones socket.

Not wishing to cut the original plug from the radio cable, or modifying the amp/psu chassis, leaves me with one option, to make a small adapter box.

it appears that the 7 pin socket is a u7b type, this is the same as the ux7 socket but the pins are on a larger pitch circle.

A socket was obtained through ebay, one of the Chinese ceramic types,

this has the right pitch diameter, and is nicely made, these are being sold both on ebay and the net, but there is a problem,

the plug prongs on the scott chassis are too short, this means that the clips in the socket don't hold the plug properly, 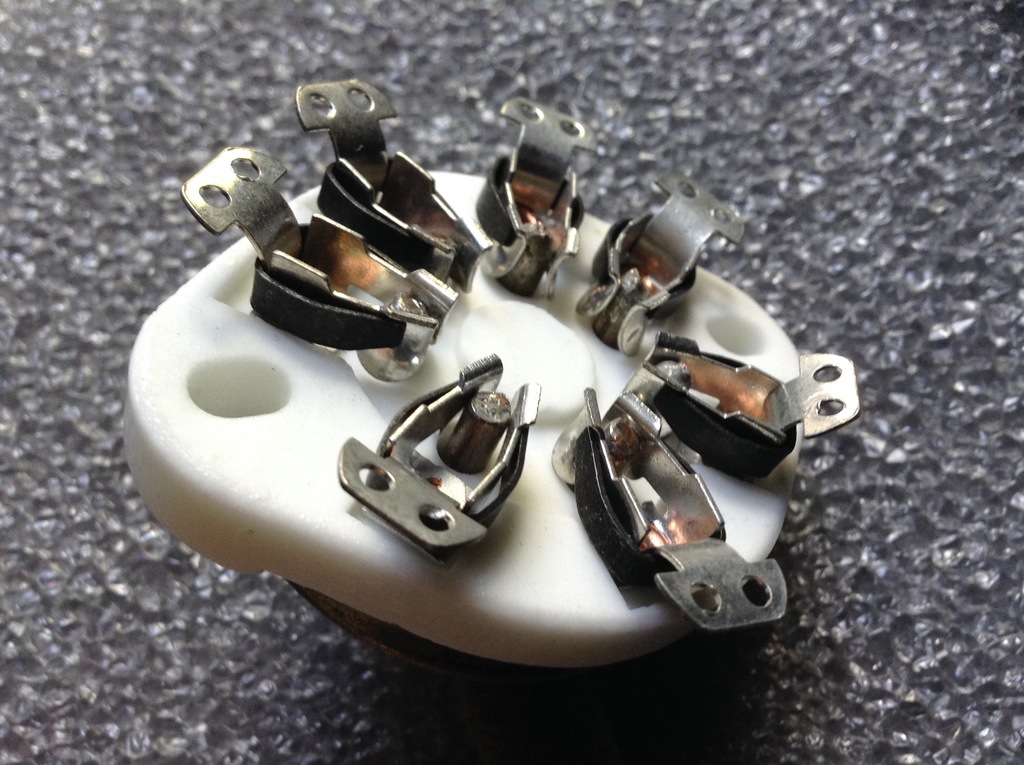 and from the plug side, 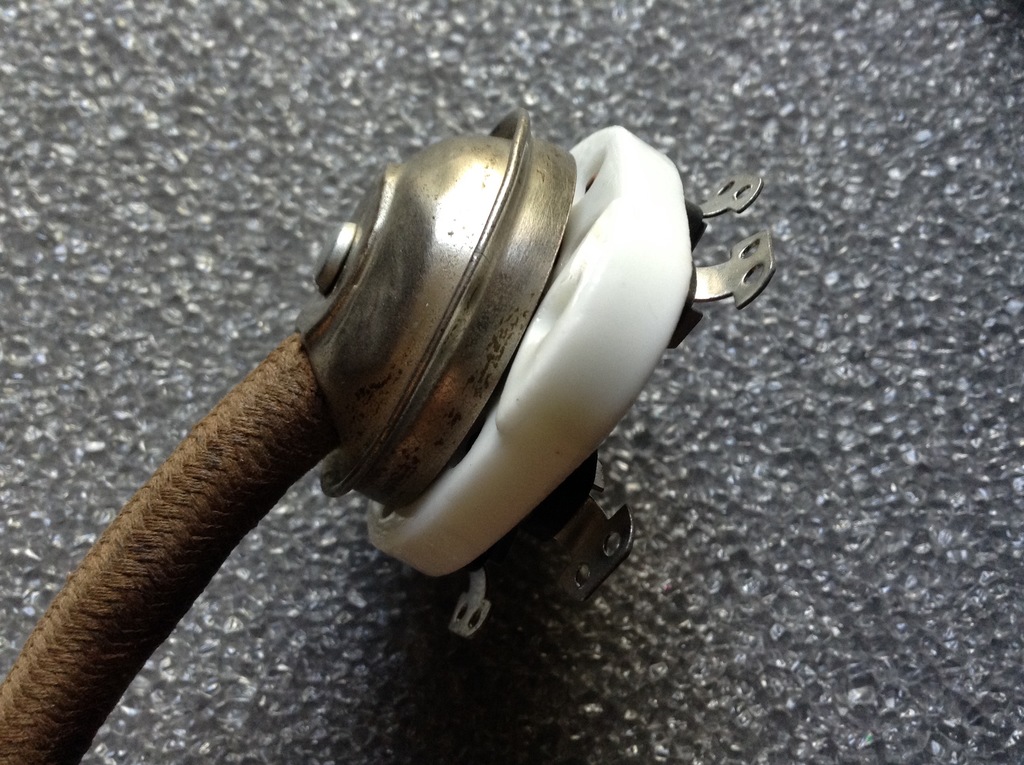 looking at the photograph, it is noticeable that the mounting holes will foul on the plug,

Scott and other manufacturers used a paxolin type socket mounted from the inside of the chassis with rivets, I tried to track one of these down, fat chance, only source would be from a parts set.

However the old style 7 pin ux7 socket is still obtainable from both the net and swap meets,

these sockets have the same size pins but on a smaller pitch circle diameter,

one of these was obtained and used as a donor 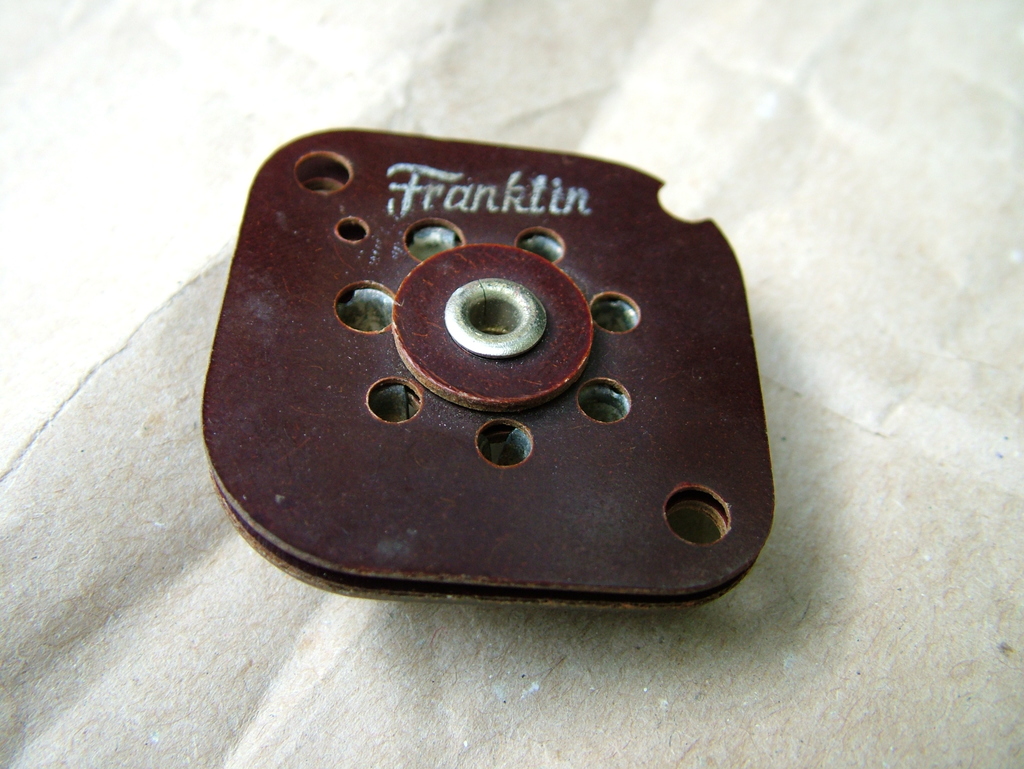 the rivet in the center was drilled out, leaving a perforated board with loose contacts Taking the measurements from the diagram, the socket dimensions are in the lower part of the drawing, A7-13 medium 7 pin. 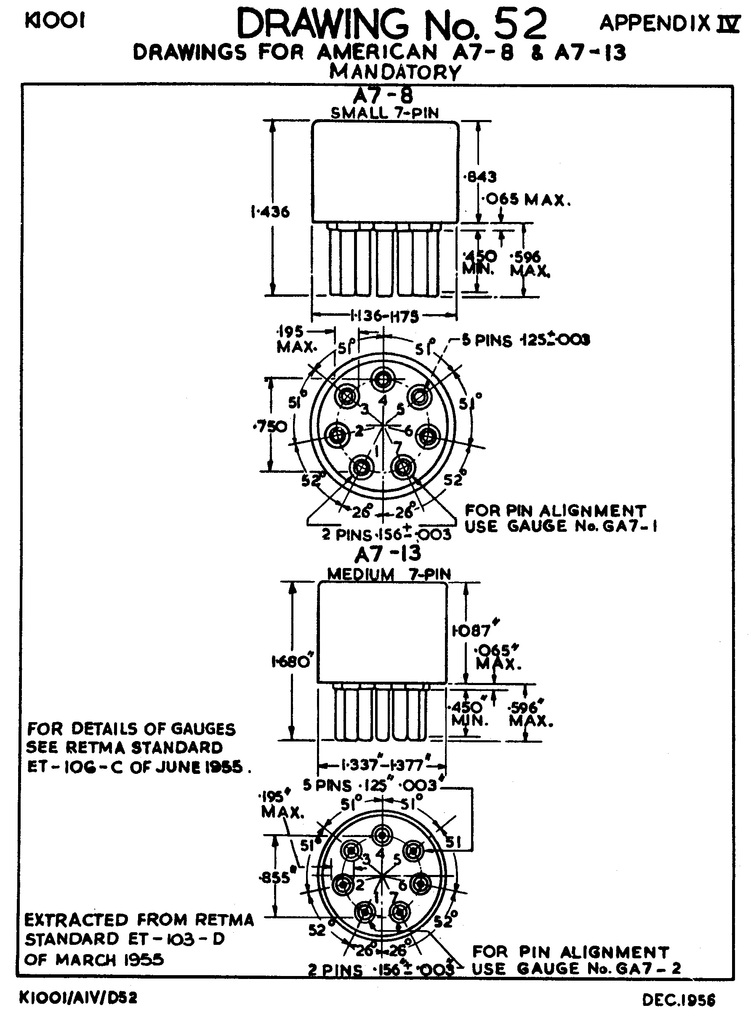 these dimensions were marked on some fiber glass pcb material and the holes drilled and filed out, 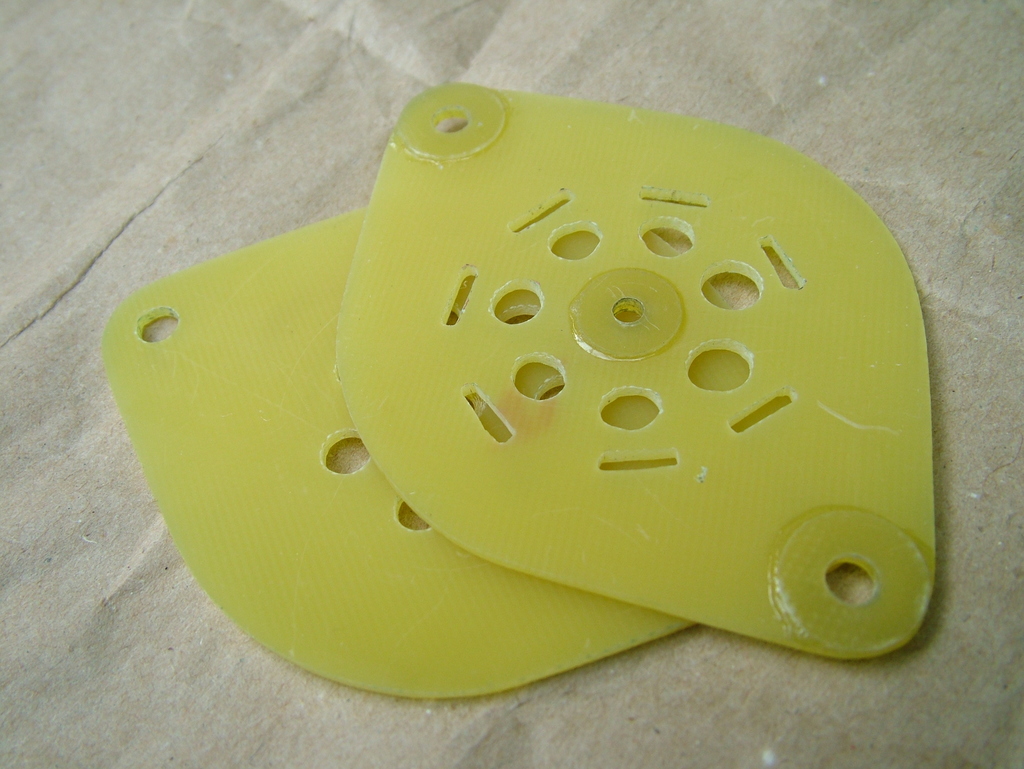 the pcb with slots has three 0.6mm spacers, glued with epoxy.

These spacers although not fitted to the original will ensure the sockets float in the final assembly, there is also a good margin for error in marking out and drilling as the prong holes need to be a little larger than the inserted plug pins, so that they will locate on the prongs when inserted,

the board is then populated with parts from the donor socket, 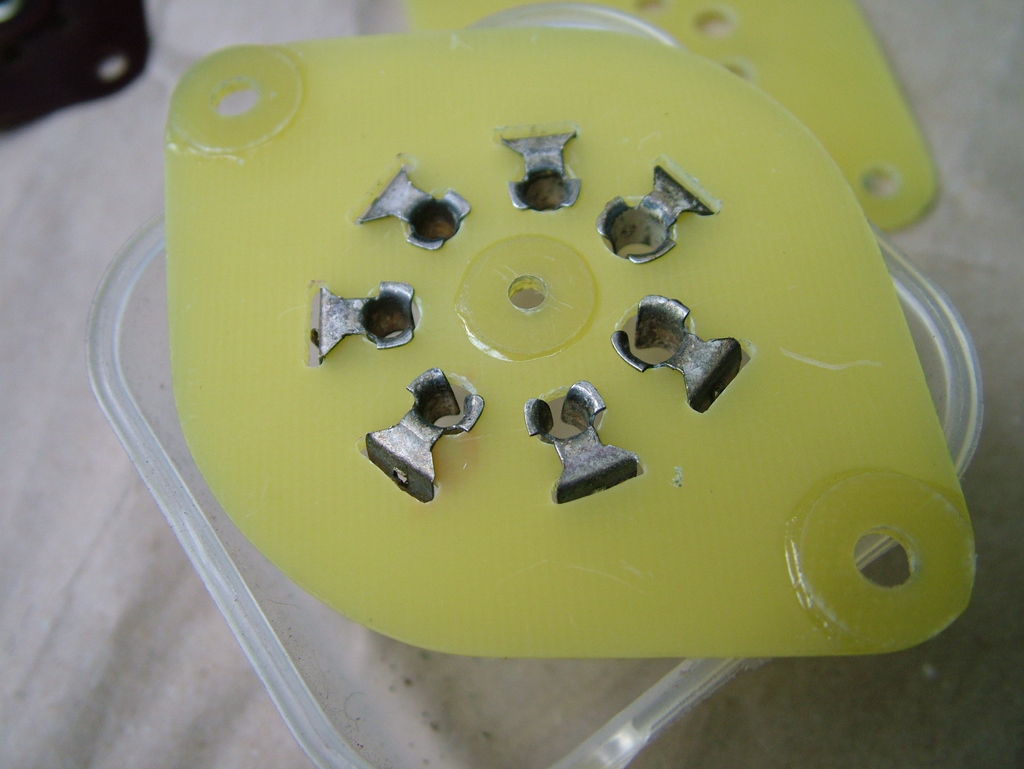 the front panel is put on with screws and tried in the plug from the radio chassis, 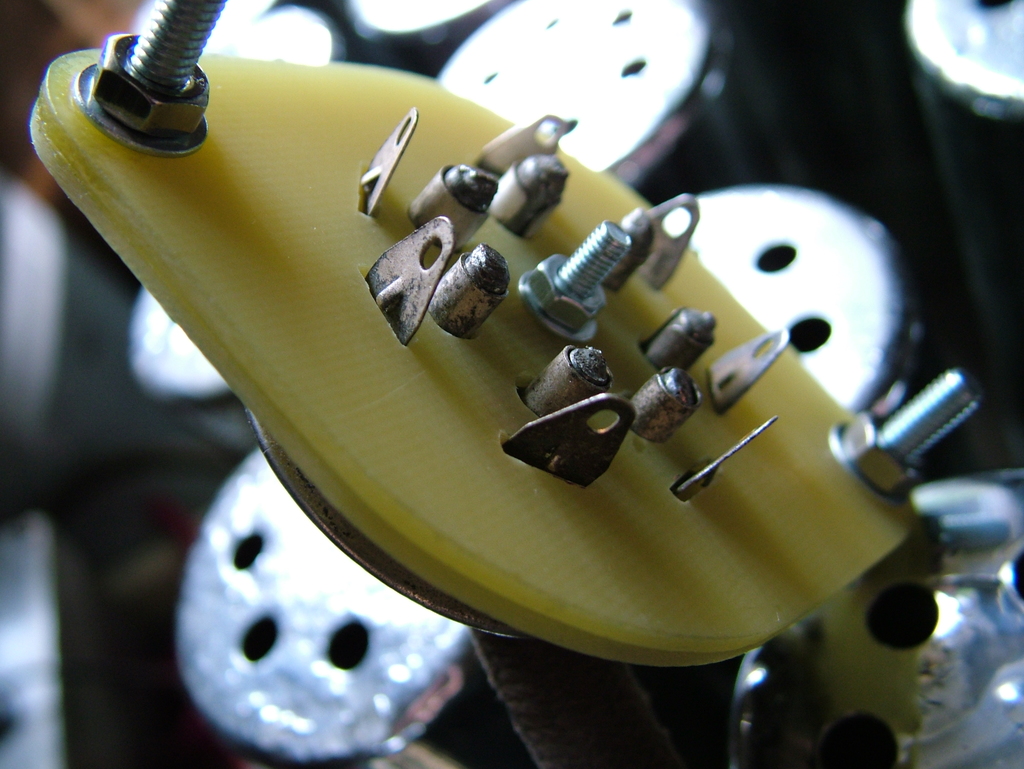 as you can see the new socket makes contact with the entire length of the prongs, and as the main body is made from fiber glass pcb it's stronger than the original, so it won't get damaged from repeated use

photo from the plug side, the finished socket was then mounted into a small die cast box, with a short length of homemade cloth covered screened cable to the jones plug for the later type psu/amp This gets around the problem of miss matched amps and radio's, and I'm sure that it can be adapted for other sockets,

You figure how to run AC to the on/off power switch on the volume control?

My Philly chassis is an early one without the switch in the radio chassis, both the speaker and the radio Jones plugs are linked out, I'm using the older method of a switch on the side of the cabinet

This socket was used on the 6A6 tube, and a few more, but it is uncommon.   I believe you can get these sockets that aren't thick porcelain like the one above, but your solution is still better than a conventional tube socket.  Nice job.

Ahh! - of course - the amp has the Jones socket. This amp expects to feed AC to the receiver on off switch and back, so you will need to re-rout to an external power switch (which Scott mounted on the right side of the cabinet).

The Scott Laureate diagram is the only diagram I know of with Jones plug wiring.the cable wiring is similar but is not identical in as much as the Laureate receiver holds the 6L6 output tubes  -  focus on the unused pin and the omission of a negative line the Laureate doesn't need.

Grand switch on is still a couple of weeks away, the set was recapped with orange drops back in the eighties,

however, the two 0.05uf caps on the local oscillator have not,

also the bathtub mounted on the center panel is untouched, along with the tin box mounted to the chassis wall,

the 5k dropper has been surgically removed and a tag board with wirewound resistors has been bodged in.

Does anyone have an original resistor? as I would like to have a go at rebuilding one, I have a few ideas on this,

oh, and the sensivity switch has been assembled wrong at sometime,

great news is all tubes are all ok, so with a little work, I should be good to go.

I have had the same idea about trying to rebuild one of these B+ dropping resistors.  There are SMT resistors available that look like they will fit in the old metal can and have a high enough power rating.  If I try, I think I will use an ohmite power resistor first to set the voltages exactly where they need to be, then remove it and measure the section resistance values, rather than relying on the original values of this divider.  2 of my 7 sets still have the original resistor and I am not willing to give one up just yet in case I decide to rebuild.  I think this divider resistor was the first thing to go on these sets as so many that I see have had them already replaced.

Once again you have created a superior solution for the problem faced. That is a very neat and well executed part.

Nice. And nice you left the amp untouched and used an outboard conversion socket shown.

Note: the Jones socket and Jones plug of later 1941 production include house AC to and from the power switch on the volume control.

(So does the Jones plug for the speaker - AC through both Jones plugs act as an interlock to prevent powering up the radio without the the load of the speaker and receiver  on the amp).