Here is my summary of the changes:

* 1st and 2nd IF tubes had 400 ohm cathode resistors introduced with associated 0.05 uF bypass capacitors.
* IF AGC tube had 600 ohm cathode resistor introduced with associated 0.05 uF bypass capacitor.
* RF AGC line was split, adding AGC action to second RF amplifier tube, instead of just the first RF amp.
* The Ultra SW band has it's signal now passed thru both of the RF amp stages instead of being introduced directly to the converter tube.  The Ultra SW band tunes up to 60 Mc now instead of 80 Mc.
* The audio diode assembly has the 2 associated 25 pF capacitors changed to 50 pF.
* Volume control is now tapped at 40K and the associated low volume compensation inductor has been removed.  The tap resistor and capacitor remain, but the values changed.
* Scratch suppressor control is fed from a potentiometer to provide adjustment voltage range from -6v to -4.5v, instead of steady -6v with no adjustment. This new pot is mounted on the C divider.
* Scratch suppressor on/off switch is no longer a pull out switch, but rather a rotary switch added to right side of front to provide symmetry with new treble control.
* Treble control is added, consisting of a single capacitor and potentiometer.  This circuit is installed in place of  5 audio tone capacitors that were ganged via a switch to the selectivity control and intended to cut the audio response at the same approximate frequency that the bandwidth was set.
* Sensitivity diode circuitry has 2 resistor values change and an 800 ohm resistor added to the -28v supply.
* Tuning eye adjustment is no longer by a 300 ohm cathode pot, but rather by a new potentiometer controlling grid voltage.

Note that nothing above is major (with the exception of the Ultra SW mod) and could easily be done by someone wanting to "upgrade" their earlier Philharmonic.

As for other changes to the AM Philharmonic, I am all ears if you have evidence that they were made during production.  One that has been spoken about is the Dickert noise suppressor.  Has anyone seen a set without it?  The Scott service literature states that these are installed in the radios, but not shown on the schematic.  Looks like it was an oversight on the schematic and they acknowledged it in the service info. The only other change that I know of is 2 resistor values in the noise suppressor that were changed in later sets.  How much later?, I don't know.  I have a 9 knob red dial set that has the early resistor values in it.

I have 3 unmolested dial pointers, and all 3 circuits match up perfectly.  This includes a very early one with the small Scott tag and 2 later units.  I now have an early schematic that I am fully confident is what was actually built.  Of course, any or all of these could have been sent back to Scott to be "upgraded" during the course of their lives.  At this point, I see no evidence of that, but I am all ears.

I am still looking for an unmolested AM 9 knober to use as a "confirmation"  and guide set.  My 9 knober was molested, though I was still able to confirm the above between the set I have plus the revised Scott schematic.

The robot control chassis in the Warsaw custom Philharmonic, serial number BB-174 was constructed in late 1937 and was updated in 1939.  I have not compared the circuit to your list above but I did find updates to the scratch suppressor circuit and the volume control.

Here is what I have for the 7 knob vs the 9 knob.  There is one capacitor that slightly increased in value from 360 pF to 500 pF that I did not point out in my summary. 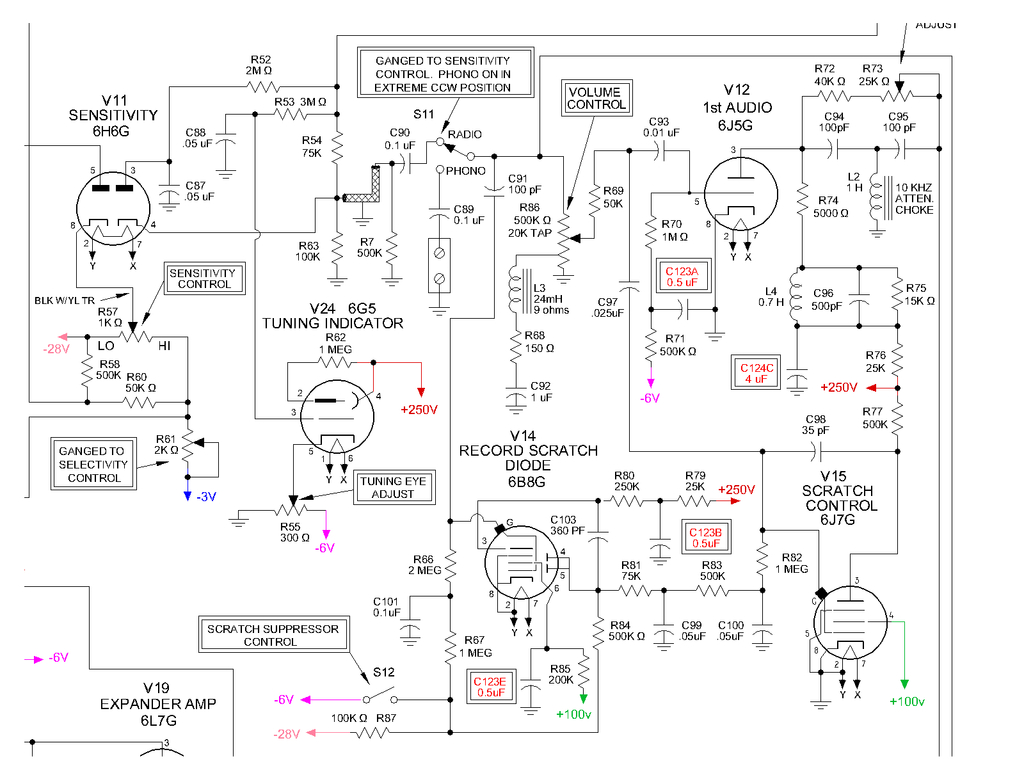 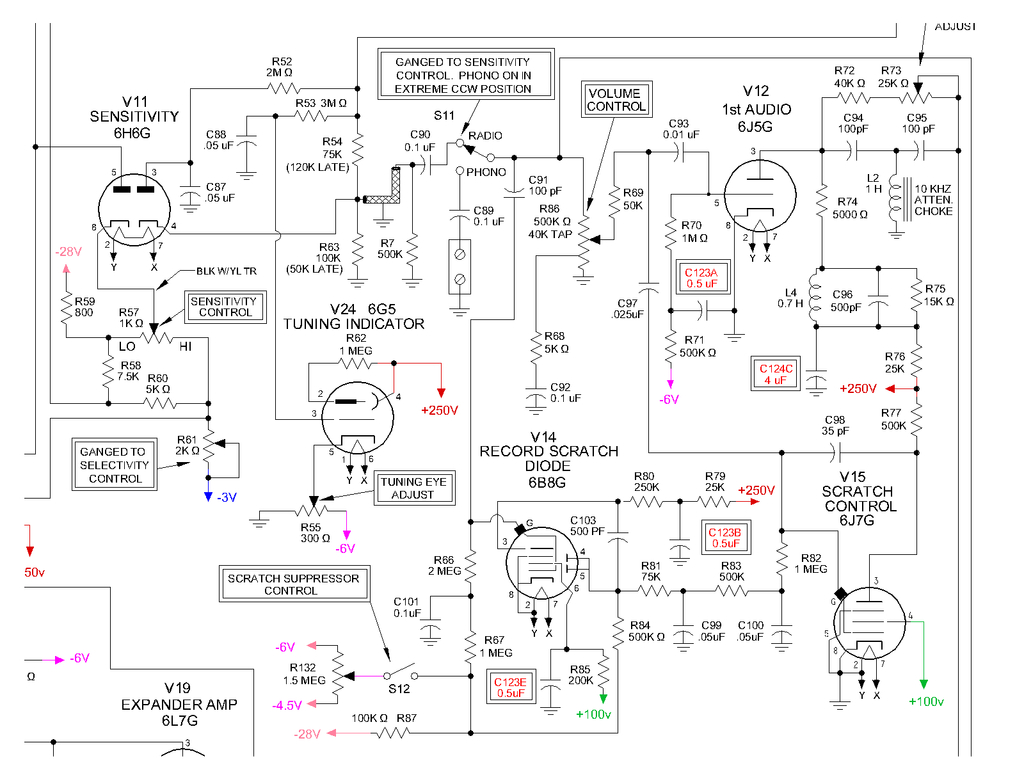 Permalink Reply by Ken Carr on June 26, 2015 at 3:59am
Great analysis, Scott! Thanks for putting it all together.

A group of us are corresponding particularly about the nuances to the 39 9 hole (remote) Phillies . Your notes above are not clear to me as I don’t know the provenance for this effort. Bringing this up again will hopefully enlighten.

Also, would like to bring up the merits/disposition of additional resistors to the IF discussed elsewhere by a Mr Majestic.