I am working a beautiful original Scott 800-B6 that I picked up this fall.   The unit was advertised on E-bay and located only about 3+ hour drive from where I live outside of Milwaukee, WI.   So.... I went for it and ended up the winning bidder.

The story goes that it was once owned by a family in the LaCrosse, Wi area.   Reportedly the family that originally owned the radio also happened to own a Ford dealership or two in that area.    The story I was told by the seller/flipper was that the radio came from the estate of the Ford dealership family and he was helping the family with the former owner's possessions.  It was he that told me that he had been told by the family that the owner of the dealership traded a new 1947 Ford pickup truck for the unit.   Of course this story cannot be verified but, the story does make me even more excited to get the unit up and going again.

It's so hard for me to wrap my head around that story 72 years later.   I'm not sure this would be an accurate comparison but, I can't imagine a commercially produced stereo, new today, that would be so special that a Ford dealer today would be willing to trade out a new pickup truck off the lot for.

I have one request for anyone out there that has been a "Scott Man" for longer than I.   I am seem to be missing the aluminum loop antenna that would have been included with this unit.   I assume it is over rated but, the unit is otherwise so nice I'd like to just make it complete once again.   Would anybody out there have a loop antenna that they would be willing to let go of?   If so, please feel free to contact me via e-mail at FickauPrototypes@cs.com.

I am also interested in possibly picking up an nice Model 16 Scott and or a Philharmonic if someone knows of any out there.

I got your PM, thanks. For everyone's reference: I'll take any serial numbers, even off "parts" sets. Thanks!

I am not for certain right now.  I took the first 800 i purchased.  The lone spare 800 tuner I picked up while driving past Detroit (thought it might be nice to have options) back to Milwaukee area.  And the 800-B6 (has the B6 decal in place) I purchased out of the LaCrosse, WI area all to my electronics guru buddy with the goal of just getting the B6 up and running.  I did not intend to have 2.5 Scott 800s but.....as I told "HER" the last one found, the B6 is not only the latest and greatest 800 model but, more so, it had the best chrome and cabinet starting out.   Roughly speaking, figured it was going to cost me about the same to restore either one so, why not put the effort and monies into the best condition unit. Once I have the one up and going, I can relist the other full unit and hopefully find it a good home.   That's the plan anyway.

So, long story short, all my Scotts are currently not in front of me but about 45 min drive away.

I think some of the earlier 800B sets were simply marked 800.  Does your set labeled Model 800 have the pre-war FM band?

Are you trying to collect serial number on Model 16s or 800s or both?

Are you interested in numbers off of only complete sets or loose receivers as well because thus far I have a spare receiver for both the 16 & the 800 that I picked up JIC and until I get both my projects up and going.    I also do have a second 800 (not an 800B) that is complete.  Plan is to get the 800B up and going and then move the straight 800 to someone else wanting to get into Scotts.

Thanks, new number for the database. It must have been built in Dec 1937 or later, based on the number.

That cabinet is the desirable somewhat upscale ACOUSTICRAFT cabinet ($45).

Model Scott SIXTEEN radio was introduced Summer of 1937, was offered for about a year and listed for $178, including the Scott Super antenna, without cabinet. Sometimes a promotional cabinet was free.

There was a choice of cabinets at extra cost.  The least expensive cabinet was the Braemer at $25.  Other cabinets ran upwards of $100 or more.

Hopefully this is clearer... What is the serial number? I can't make it out. thanks!!

Your blog mentioned that you were interested in acquiring a Scott "16" … I have one that I would consider moving... It is in what I believe is an Aristocrat case. I have not run it for a number of years but did run then. I have the original paperwork including the bill of sale and letters from the builder regarding repairs. This belonged to my wife's grandfather who bought from the original owner. I also have some extra tubes. My name is Bob Cameron in Rhode Island … My e-mail address is rcameron02889@verizon.net 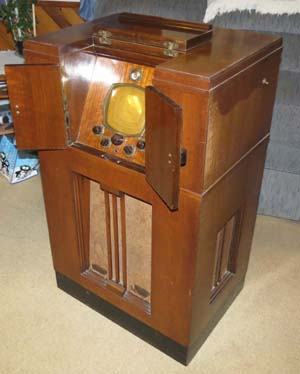 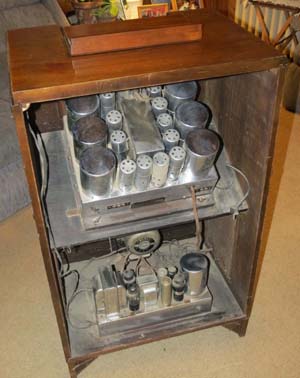 I was not aware the aluminum loop antenna was NOT stock to the unit.  That would help to partially explain why you see relatively so few of them still attached to receiver units up for sale.  That being the case and considering the overall condition of unit and details such as the perfect original wiring harness, this unit may very well have not had the option antenna from the get go.    In your opinion, are they worth pursuing?