A few weeks ago I was forwarded an unusual email by a fellow S.Q.C.R.A. member. A certain gentleman up in Picton Ontario was looking to pass on his father's beloved Masterpiece VI to an appreciative home. After much consideration I decided to inquire for more details about the set and eventually came up with an offer. Over the following days the seller was kind enough to send more pictures, details as well as a quick inspection report from Gord Rabjohn, a C.V.R.S. member. We eventually agreed on a price and set a date for the transaction, which took place on Saturday.

His father, George B. Publow (G.B.P.), ordered the set new in 1936 or 1937 and drove all the way to Chicago from Picton, ONT to pick it up. The gentleman was a member of the Prince Edward Yacht Club and ran a local marina, which means he was extremely busy in the summer fixing boats, selling gasoline and sailing. However, when the winter came, he would work on old clocks, tinker with radios and listen to amateur operators (Note : We've actually found at least one occurence of him partaking in a DXing contest with his Masterpiece VI, in the May 1937 edition of Radex).

Needless to say I am thrilled with the opportunity of being the 2nd owner of such an incredible radio, with a lot of background history to boot. Attached are two pictures of my radio dating from the 1930s and 1940s, one featuring G.B.P. himself while he was DXing. 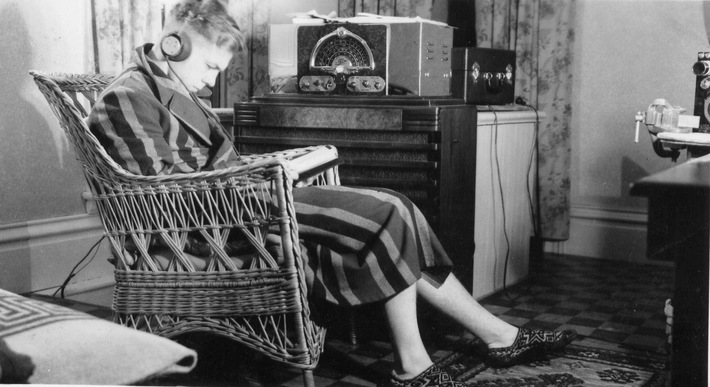 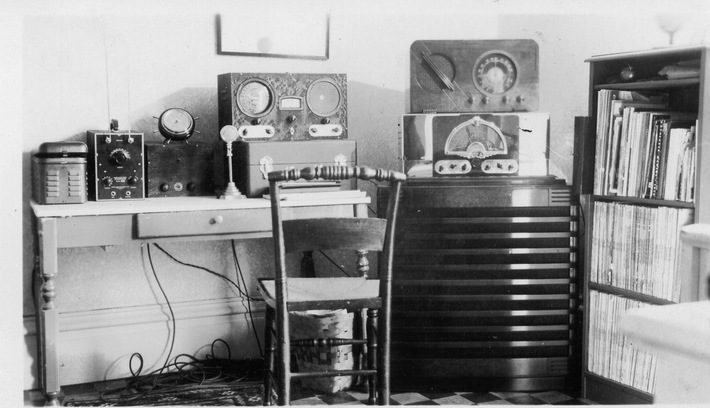 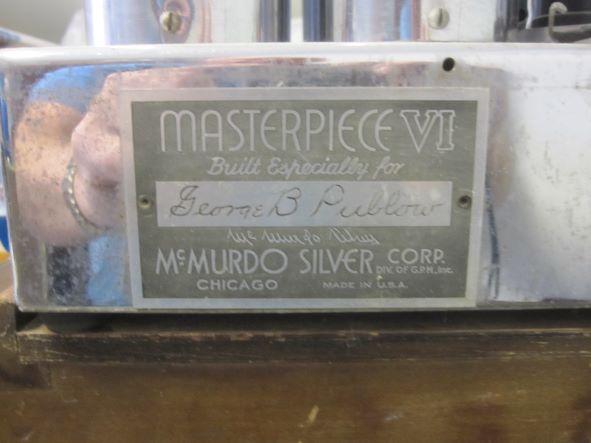 It is now time to start assessing the work that needs to be done in order to get the radio up and running. Prior to my purchase, it was brought up on a variac and could pick up local stations, however the audio was extremely faint. Upon flipping the bottom chassis over, I've begun noticing quite a few changes made to the set, such as the transition to 5U4 rectifier tubes, as well as modifications to the circuitry inside the base of the speaker (addition of a switch and RCA jacks). I plan on reversing these modifications. I believe what happened was that the O.T. failed, and someone tried to figure out a way to retain headphone functionality and the possibility of connecting an external PM speaker, while keeping the field coils in the circuit.

My main concern at the moment is the absence of an audio ouput transformer (T10) inside the bottom chassis, having been substitued by a couple of orange drop capacitors and a couple of resistors.

I am slightly overwhelmed in regards to chosing a replacement for the transformer. For packaging reasons, I think the Hammond 125E might be a good substitute. However it seems a little underrated to me, especially since its frequency range begins at 150Hz.

What would you use (have used) in this set as a substitute O.T. ?

A clear schematic can be found here : https://www.antiqueradios.com/forums/viewtopic.php?f=6&t=389342

Here is a picture from a few minutes after I unloaded it from the car : 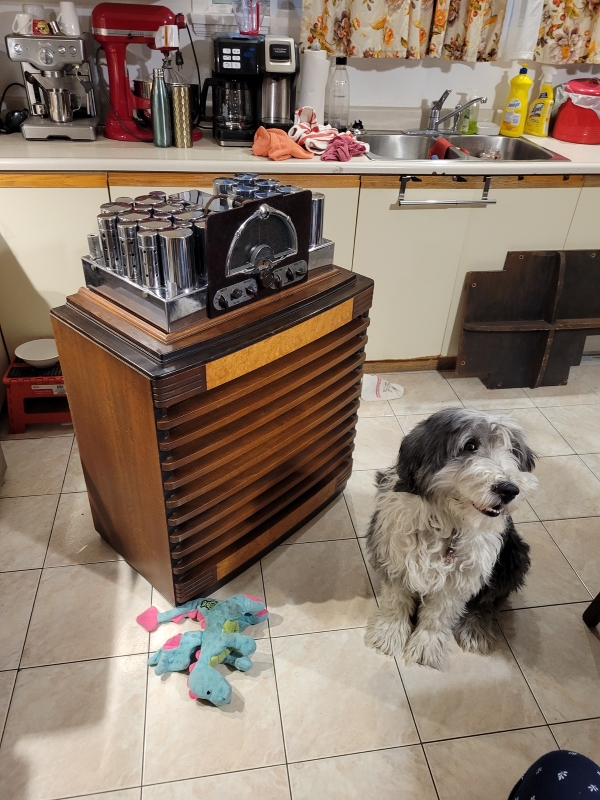 Thank you in advance for your help.

Oh wow! Thank you so much for those references! I sure wouldn't mind a little help digging, if you don't mind.

The Hammond 125E output transformer you mentioned is a 15 watt rated universal replacement for push-pull output circuits. I used it for a 14 tube Scott Masterpiece of 1940 with p-p 6V6's. The 15  watt rating of the 125E output transformer is shy of the your MP6 max output rating of perhaps 30 watts  with p-p 6L6's, but may be OK if you keep the volume control at modest levels.

The sheet that comes with 125E suggests which of the 6 output side lugs to use depending on the output tubes and the voice coil impedance. But the combinations max out at 16 ohm impedance. My Scott Speaker has a 38 ohm impedance voice coil. (impedance is not the same a resistance with a meter. My Scott speaker 38 ohm impedance VC measured about 31 ohms with my VTVM). Pre war speaker impedance was not standardized like the post war 4, 8 and 16 ohm standards we are accustomed to. The beauty of the 125E transformer is the construction leaves room to add turns around the coil inside the frame to decrease the ratio of the primary to secondary windings if needed. For my purposes, I added 19 turns off of lug #6 to to produce a makeshift lug 7 - and used lug 1 and 7 for the voice coil. But your speaker is likely some other impedance.

Technical info on McMurdo Silver Masterpiece series radios is hard to come by. Even the circuit diagram often glued inside the bottom cover plate lacks values and scant voltage information.

So, if your voice coil is good, measure the VC resistance and multiply your reading by 120% to approximate the speaker VC impedance.

Just saw your thread on ARF.

Determine the impedance of your speaker is the first step.

Sounds like you got that right. The O.T. is indeed located inside the base. I got confused as the schematic calls my missing transformer T10 Audio Transformer.

I can have one made. I have a friend who rewinds transformers and he is up for the challenge. If I can figure out the DC resistance of each winding and the ratio, he says he could probably whip one up using an old core. I suppose I have some digging to do. Back to the drawing board...

Thanks for the kind comments Dave. I'll be sure to get in touch with you.

As Bill Liers pointed out, what I'm actually missing is the interstage transformer.

Turns out the output transformer is in the speaker base, and what's labelled as T10 Audio Transformer on the schematic is actually the audio interstage transformer.  As you can see in this picture of my set, it is entirely missing from the chassis (should be located right between the rectifier and output tube sockets). 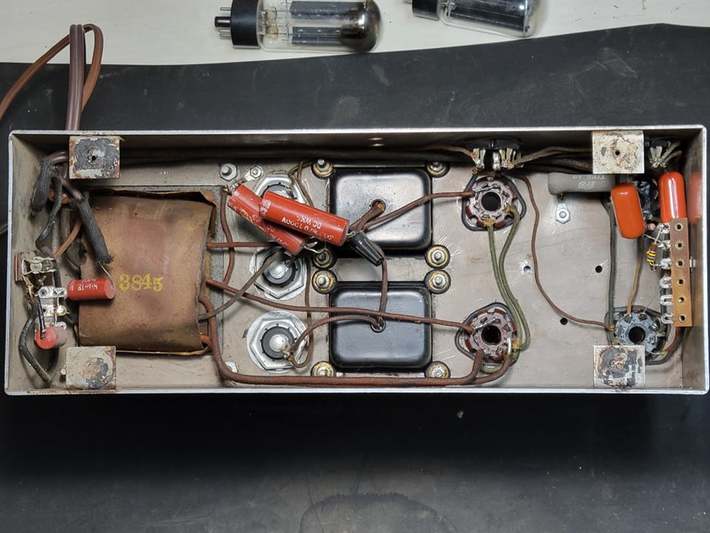 Note : this is NOT my handiwork...

IF I can find out the DC resistance of each winding and the ratio of that transformer, my friend Patrick Dufresne of the S.Q.C.R.A. would be up to the challenge of winding me a new one using an old spare core.

Does anyone have a spare Masterpiece V or VI power supply chassis sitting around they could take these measurements from? Better yet, possibly sell me the transformer?

Thank you very much,

Does this help?  From a Masterpiece VI that Russ Webb rebuilt.  I did not measure but found this written on the transformer.  I assume Russ did that.  I had to open it up anyway since I had a light show inside one of the tubes and wanted to check all components. 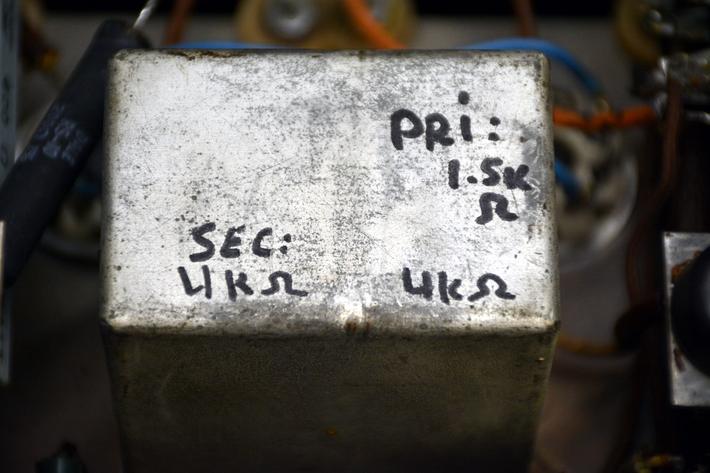 I did measure and can confirm the 4K but I measure 1.64K on the primary.  I'll try to determine the ratio