While in the process of restoring a remote Philharmonic tuner chassis and comparing to a parts remote tuner chassis, I have discovered a major circuit change in the UHF RF circuits.  Unlike as shown in the published schematics for the Philharmonic, the chassis I am restoring (October 1937) does not have a separate dedicated antenna terminal for the UHF band.  It is also lacking coils for the Antenna and RF1 sections.  One side of the doublet antenna terminals is coupled to the UHF coil in the RF2 section of the tuner.  The parts set (October 1939) has the additional dedicated antenna terminal and the UHF coils in the Antenna and RF1 sections.  I welcome additional reports of UHF circuit version and inspection date.

Yes.  The circuit you are working on is from the schematic dated May 15, 1937.  The "revised" schematic is dated April 4, 1939 and shows a dedicated antenna terminal for UHF.  You can find the schematic for your early set in Marvin Hobb's book.  I anticipate having this early schematic available in a redraw in the very near future.  How many knobs is this set?

Of course, I would like to document every Philharmonic circuit variation and put an order (date) to them, so please chime in !!  Maybe we can start a database of Philharmonics and put a date to them along with what circuit features each had. 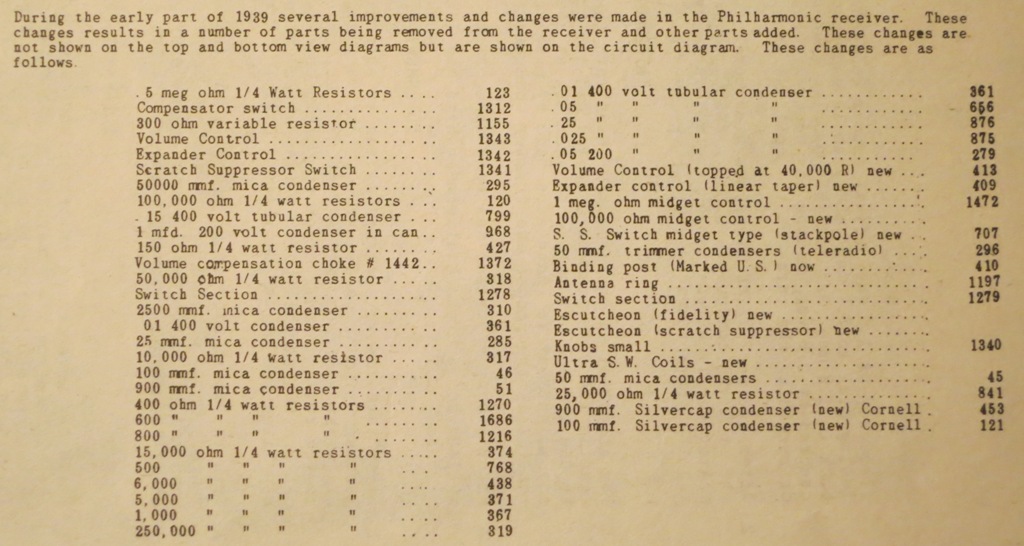 This indicates that the change was made in early 1939.  The right column near the bottom indicates that "Ultra SW" coils were new.   The schematics calls this band Ultra High Frequency, which is not really appropriate.  The Scott dials call it Ultra Short Wave, which is more appropriate.

This change list  also indicates a new binding post and a switch section as you indicate is not in the radio you are presently working on.  Not a lot of new part numbers, but a decent amount of existing components (meaning they already were used elsewhere in the set and had a documented part number) were used in the modification.

Thanks.  I was not aware that the schematic in the Hobbs book was the early version that I do not have in my Philharmonic file.  The parts chassis is a 9-knob version.

Permalink Reply by Joe Miller on January 10, 2015 at 6:33pm
Scott,
Your nicely redrawn schematic does show the dedicated antenna post for UHF.
My Philly doesn't have one. And the dial indicates "Ultra SW" 25 to 80 mHz.
So I guess I have the older version. S/N KK-54.
Where can I find the "Hobbs book"?
Joe

I believe that the dial went to 80 Mhz before this revision, then it went to 60 after.

I will send you a copy of the early schematic redraw when it is complete, hopefully within a few weeks or so.  I am unaware of any other source for this schematic besides this book.

The Marvin Hobbs book I have is from Radio Daze Press.  It is titled "EH Scott....The Dean of DX".  Not sure if it is still available.   I can scan the schematic for you if you would like.  It is certainly a book worthy of your library.

Norman and Joe, are both your sets 9 knob beam of light units?

Permalink Reply by Joe Miller on January 10, 2015 at 8:16pm
Mine is a 7 knob (not counting the scratch suppressor pullout). It's the pointer dial version.
Joe

I have scanned the early Philharmonic schematic and put it in PDF format.

If anyone wants a copy, please send me a message with your e-mail and I will get you a copy sent.

Kent- if you want to add this to the Google drive files, let me know where to send the files to.  I am not sure if there are any other copies of this early Philharmonic schematic floating around.

My BB226 Philharmonic 30 (pointer dial) does not have the UHF ant post.Scott great job on the redraw schematic.I can now follow  every thing easy.Thanks again...

I am thinking that the UHF circuit alteration was made when they converted to 9 knob sets-  It was one major revision that happened in early 1939.

Kent- if you are reading this- when you record the serial numbers, do you also record the information like number of knobs, bands, etc?

Much appreciated.  Will come in handy as I'm doing some trouble shooting now in the expander and audio section.

FYI - My pointer dial Philly KK-237 has the ground post and the pair of antenna posts only.

Scott - Appreciate your pointing out the early Philly diagram is in my Hobbs book (SECOND expanded edition by Hobbs, published by John Slusser in 2002). I have the commonly seen Riders information as well and the nearly identical Scott Labs Technical Service Data. Both show the curious combination 1939 receiver diagram and the earliest version amp with 83v rectifiers instead of the 5Z3 pair my pointer Philly has.

Paging through the other diagrams, I note Marvin Hobbs book includes the Quaranta receiver with Scott's earlier version volume expander, and the mid amp diagram. Also Hobbs later book shows the Philly Amp diagram with 5Z3 rectifiers rather than the 83v pair.. Be making some photocopies of the Philly diagrams to work off of. Wonder if Marvin still had his own file of diagrams.

The Philly threads have ramped up my interest further. Guess I will start my own Philly work sooner, and see what I can contribute to these discussions. I acquired mine over 50 years ago as a teenager, and did a partial recap by 1960. Needs a do-over now.