Norman did tell me that some philharmonic sets did have a multisection electrolytic fitted, I suppose a check of the wiring wouldn't go amiss here to see if it's original

the wiring to this cap is not original.  However, there are not holes in the chassis to mount the can so Scott may have used this type of electrolytic.

Sometime during the later dial pointer manufacture, EH Scott changed to an FP style capacitor with a "C" clamp to hold it.  Your 9 knob, being later than the dial pointer,  would not have had a "box" style capacitor for the four 4uF units.  The box was retained for the seven 0.5uF capacitors in the 9 knob models. 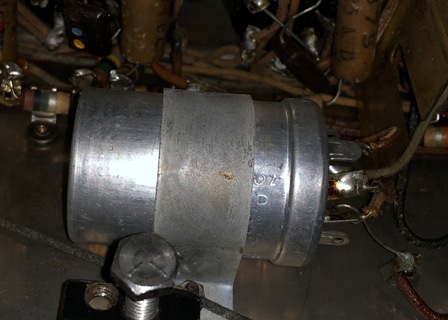 Thanks Mike.  The box that held the 4 - 4mfd caps had been replaced with a 4 section can electrolytic.  so, I may make one to replace that!

Multi sections filter caps were coming on by 1940. My late 1939 Phantom Deluxe amp with pair of 6L6's has a 2 section filter cap and cut for only 3 top mounted filter caps. Appears Scott was using the same amp steel base with 3 filter caps holes for both Philly and Phantom models sometime later in 1940, different power transformer and wiring of course.

I'll echo the above comments - this is very likely factory - even if the cap has been replaced, Scott was using an FP cap with clamp on most of the large sets after 1939.

just like Scott Seickel's phono above today, my late 1939 Phantom Deluxe receiver has that style 4 unit filter cap secured by the same clamp. With remote control items in the way, was a chore to remove. I rebuilt it with modern caps and reinstalled it.

Excellent!  I will probably re-stuff it with new caps, even if it had been replace at some time in the past 30 years.

This is what was fitted to my Philharmonic, a Mallory 4 x 20uf and the diy attempt at a dropper resistor

20 uf is a little excessive. 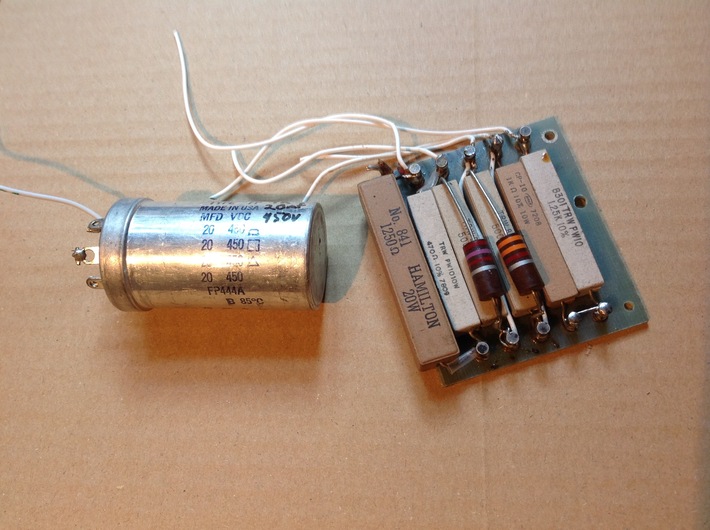 from my Phantom Deluxe. Cut with hack saw. pulled top off.

Drilled small holes through bottom for each cap to wrap round original lugs.

I do it just a little differently, David.  I use a belt sander to grind off the rolled over crimp, remove the ground ring, and work out the positive terminal assembly.  then I install the caps as you did with the ground coming out like yours.  I have to chamfer the inside edge of the positive terminal assembly so that it will fit down in the expanded portion of the can a little farther with enough aluminum above the ground ring to to roll it over the ring again.  The only visual difference is that the width of the expanded portion of the can (originally about 1/4") ends up being about 1/8".

The amp /PS had been repaired in the past with wrong value electrolytics strapped in.  I restuffed the original cans with closer values, checked all resistors and for now, left the Solar .1's.  the tech had added .05 "safety" caps from the line to ground.  I removed them and installed .01 XY caps.  The schematic does not show these caps.  Should they really be there????  Do they have a function in these radios?

The cap change bumped my negative bias voltages up a bunch.  I had to go in the radio and add some "trimmer" resistors to bring that back in line.  The radio works better than before!

I want to change the Solar caps and what originals remain.  Then I'll haul out the spectrum analyzer and do a very careful alignment of the IF, paying special attention to the shape of the curve, especially at wider bandwidths where I'll have the radio set most of the time.

A before and after pic  (you can see the narrower crimp area on the cap on the side of the chassis): 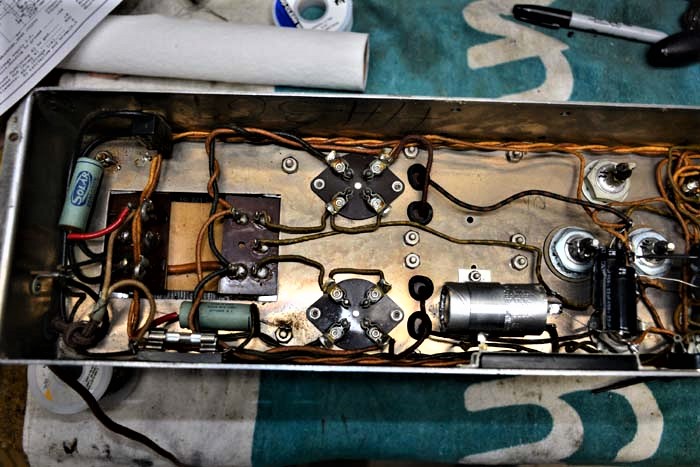 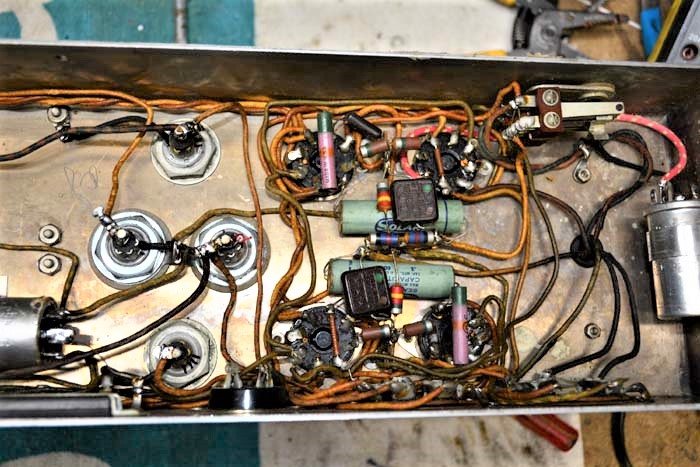 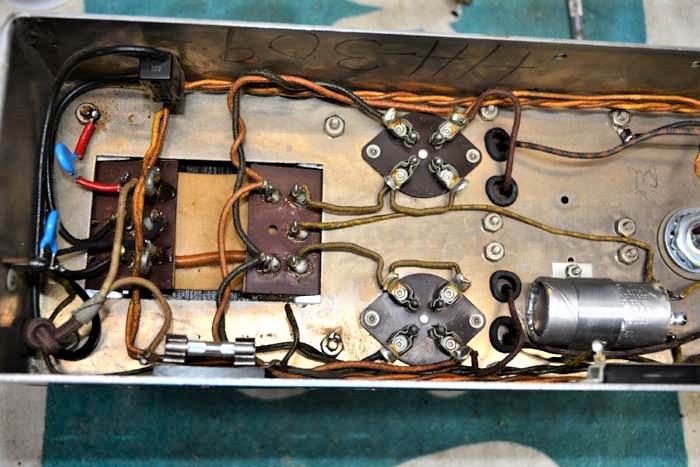 Nice job so far, looks much better when you remove the junk and put things back as they are supposed to be.

Running through the IF with an analyser is the way to go, Norman's published method is excellent if you don't have the test equipment, I used an ancient Triumph wobbulator, starting with the selectivity wide open and running from the audio end towards the 1st detector, paying attention to the slope either side of the envelope, it's very easy to get it lopsided.

I had a very peculiar fault that the sensivity diode was weak, this allowed the if to break into oscillation, a real head scratcher for sure.

attached is a photo of my wobbulator, the left is as the if started, the middle image is selectivity wide and the right narrow.

To address this question, the line bypass capacitors are to reduce or eliminate modulation hum.  That distortion is only present when you are tuned to a station.  These radios were engineered to work fine without them, so there should be no need to add them.

the tech had added .05 "safety" caps from the line to ground.  I removed them and installed .01 XY caps.  The schematic does not show these caps.  Should they really be there????  Do they have a function in these radios?