Jumping the gun as I don't even have the set yet, but I'm in need of the Hi Fi Crossover box to complete my AM/FM Philharmonic that has the optional 4 unit Hi Fidelity speaker system. I have the tweeters, and the woofer, so all I need is the crossover box. Any leads would be appreciated. Ironically about 2 years ago there was one on eBay that I was going to bid on just to have it for the future. Ah well... Thanks, Karl

This might be very difficult to find unless you are lucky.
Good thing is that one is very easy to make because of the 8 ohm impedance of the speakers in that setup.  6L6 parallel PP to 8 ohm output transformers are commonly available new.  Beyond that, all you need is a couple of chokes and capacitors for the tweeter crossover.  Now if I could only find an output transformer for my 38 ohm pedestal speaker.....

Some folks assume the standard Philharmonic 15 inch speaker (flange mount or pedestal) with output transformer is compatible with the crossover - not so, because of significant voice coil impedance mismatch.

3 versions of the crossover for the Philharmonic and Phantom Deluxe (and 1941 Laureate). First has 2 large coils on top. Second is electrically the same, but smaller components. The third looks like the 2nd but has a rectifier tube to power field tweeters and has 4 pin tweeter sockets instead of 2 pin.

Finally, be sure the crossover has the correct plug for your Amp. Scott changed to Jones plugs sometime 1941.

Hi David, Yes it is the flange mount and has the "High Fidelity" sticker, so that looks good. But the original 5 pin plug was replaced with a 8 pin octal plug, and the 7 pin speaker connector on the amp was replaced with a 9 pin "octal" style socket. Once I get the set I'll put together a list of parts, but for now it looks like I'll need the 7 pin speaker socket and the 5 pin speaker plug. The tweeters look to have the original plugs, so they should be OK. Agreed, finding these plugs and sockets will be a challenge.

Karl: Check out Hammond organ and Leslie speaker on ebay.  Hammond and Leslie used these 5, 6 and 7 pin plugs and sockets on their amps and organ chassis.  They are still available and show up on ebay as new or used parts.  You can sometimes find the 2 pin and 5 pin plugs and sockets as well, since Leslie used them for the switch connections. The 5 and 6 pins should be easy to fine, the 7 pin was not as widely used, but can be found. Another source may be Wire Pro, if they are still around.

Karl - Tricky finding the correct round style 7 pin speaker socket for the amp.

Appears Scott wanted to avoid attempts to insert plugs into the wrong sockets.

Those sockets and plugs are found with different diameters of the pin circles. The receiver plug and socket pins  diameter is about 1 inch.

And usually, the plugs (and also for 7 pin tube bases) the 2 fatter pins are adjacent.

But the Philly speaker plug and socket fat pins are pin 1 and 4 and the pin circle is smaller at about 3/4 inch diameter.

A junker rust bucket Phantom Deluxe parts amp is another source for that speaker socket.

Thomas - thanks for the organ parts supply source. I will take a look.

Thomas, thanks for the suggestions!

David, yes I noticed that, as well. Looks like I'm limited to the Philharmonic and Phantom amps for that part.

The fall back alternative, I think, is a 7 pin plug and socket (with metal mounting plate) sized to prevent the receiver plug also fitting it. I suppose you could use an octal plug and socket which will confuse a future owner, because the Scott models Sixteen, Super  12 and Masterpiece speaker used the octal plug for the speaker.

If you depart from the correct plug and socket, advisable to hang a tag on the cable and amp explaining.

David,  I guess there were 2 more variations of the crossover, one for the AM/FM that has the 4 pin connector to shut off the tweeters on AM, and one without it.  Any reason why they would want to turn off the tweeters on AM?  EDIT:  Looking at my AM/FM sets now, one has the 4 pin plug on the back of the tuner chassis and the other doesn't....they sure didn't make things easy.

Scott - It's never easy with Scott. I'm curious, what are the serial numbers on the two FM sets with and without the 4 pin plug? Maybe that was a late mod (or early)...the serial numbers might help date them. Of course, it could be a customer request change too...

The 3 crossover versions I have seen have the cable to the receiver to control the tweeter.

The optional 4 unit high fidelity speaker was introduced March 1940 along with announcement of the 28 tube FM Phantom Deluxe. (Scott News Vol 12, No 2). The FM Philharmonic was announced a bit later in August 1940.

The logging scale window at the top of the dial was new for January 1040 for both the Phantom Deluxe and Philharmonic, and also  for the FM versions introduced later during 1940.  If no logging scale, then the receiver predates the speaker system and does not accommodate the crossover, in which if there is the little socket, it is probably phono.

That small 4 pin connector could be for phonograph or for the tweeter control - so trace the wiring.

If there is a separate terminal strip for phono for a 1940-41 receiver, then the little socket is probably for the crossover cable.

I do not have an FM Phantom Deluxe nor FM Philharmonic model in my collection.

The high fidelity speaker system was advertised for the FM models. Scott suggested the standard speaker was sufficient for the AM models. But silent of tweeters function on Phono input and 78's fidelity was increasing, too.

My 1941 price list offers the AM Philharmonic (and AM Phantom) with boxes to check if the FM version was desired for an additional $49.50 ($39.50 Phantom). On the last page several options including the 4 unit speaker system for $29.50 with nothing to preclude ordering it for the standard AM Philharmonic.

Scott apparently continued to supply the 15 inch pedestal with optional tweeters well into 1940 and maybe into 1941 for the AM Philharmonic.

Documentation indicated for the 4 unit speaker system the tweeters were controlled by a wafer on the band switch to operate only on the FM band. My 1941 Scott Laureate FM/AM/SW is wired that way.

But Scott was a customs set builder, so trace the wiring. If you want the tweeters always active, skip plugging the crossover plug into the little receiver socket and bridge the two pins with the audio signal.

I don't know if the serial numbers will help.  The one with no 4 pin socket is GG-448, and the one with a socket is LL-392.  The LL series has a weird sequence that starts with early dial pointers, goes to 9 knob beam of light and ends with AM/FM.

Here is the GG with no socket, you can see that there is a chrome plug where the socket would be: 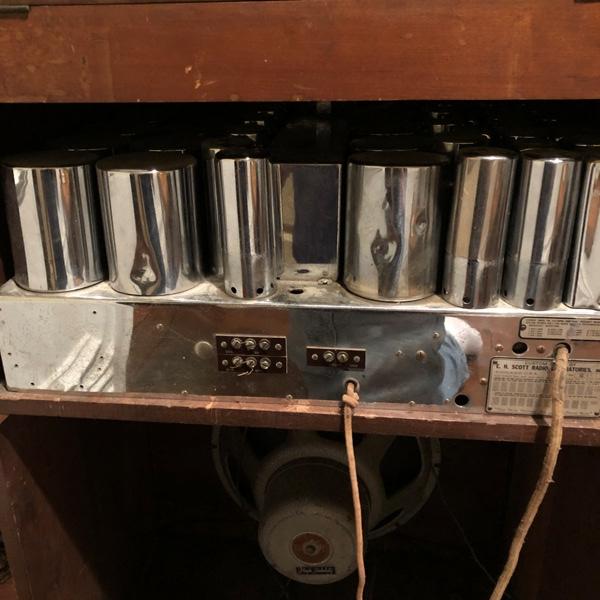 Here is the LL: 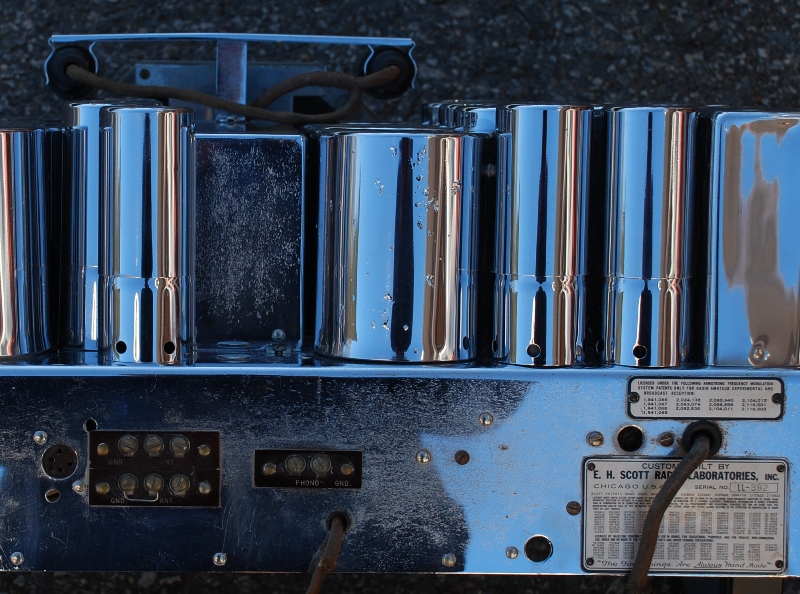 Here are the crossovers that came with each: 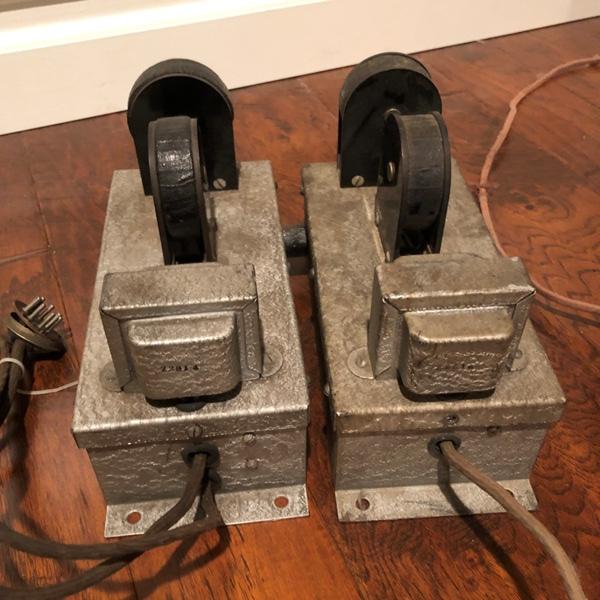 As you can see, one crossover does not have a hole for the control cable.  Not even a plug in an an empty hole, and no other holes are on it where control wire could have been.  This crossover was obviously made from the factory so the tweeters would be on all the time.

If the tuner chassis socket was added when you ordered the Hi Fi option, then I could see a tuner not having the socket, but instead having the hole plugged as shown above.  But how do you reconcile the crossover not having at least a hole where the control cable would go?  The set without the crossover control cable was purchased complete and my best guess is that it was not a victim of chassis swapping.

Seeing as though both of these crossovers are the early version, I am going to conclude that Scott started out with no control cable, then for some reason decided that the tweeters needed to only go on when switched to FM.    The manual states to put the tuner in FM band when playing the phono so that the tweeters will go on.  It makes no sense that the tweeters would be off when on the AM bands.  It had to be a design issue they were compensating for.

Scott - Yes, both yours are early version crossovers with the large coils above.

Your speculation on the one crossover being an early version before a decision to block the tweeter except for FM seems plausible, to explain absence of any hole for the small control cable with small plug. And I suspect no small receiver socket either, although both receivers seem to have been drilled for two small sockets on the left rear back apron.

Sets below were obtained as complete radios intact, except as noted, with comments on speaker provisions, thus:

- My pointer dial Philharmonic (and another I just sold) have, of course,  no provision for the optional 4 unit speakers, and came with the 15 inch pedestal and PM tweeter set.

- I have a late 1939 Phantom Deluxe 20 tube (AM/SW, Remote Control, no logging scale, Voltage regulator, 6L6 output tube, and 5U4 rectifiers) and it has the small socket which I traced to the radio/phono switch.  It pre- dates the 4-unit speaker system by several months. Came with the standard 12 inch flange mount 38 ohm standard speaker.

- I have a 1940 AM Philharmonic (AM/SW, Remote Control, BOL dial, 8 shaft controls, and logging scale) and it has the small receiver socket, which traces to the radio/phono switch. Do not know the original speaker system. ( I acquired amp and pedestal speaker set for it recently). Lacking the little crossover socket, I conclude it is early to mid 1940 production .

- I have a 1941 Scott Laureate with the optional speaker system (crossover with rectifier tube, and 15 inch Co-axial speaker with center mounted field coil tweeter. it has the small receiver socket which is wired to the band switch to control the tweeter. Has a separate terminal strip for phono hookup.

- I have another early crossover on the shelf with the small cable to the receiver (and 12 inch flange mount 8 ohm speaker) that came from an FM Phantom Deluxe.

I have not seen  crossover without the small cable for tweeter control.

* My FM Phantom Deluxe manual installation page for the optional 4 unit speaker manual shows the cable but makes no mention of the tweeter being controlled by the band switch.

*My FM Philharmonic manual shows the illustration pg 3 for the optional 4 unit speaker system but does not show a cable from the crossover (aka network unit) to the receiver, which seems to concur with your crossover lacking such small cable.

*My FM Scott Laureate manual  has an addendum page for the optional 4 unit speaker system installation, with a footnote that the tweeters do no function on AM reception.

Others may have other version owner manuals with additional tweeter function information.