Ok gang...so I have an AW 23 that I fully restored about 4-5 years ago. Played great. For lots of reasons, it hasn't been run much since then. I ran it up on the Variac this weekend, and here's what happened: AM and first SW band are dead, and the osc VR tubes don't light. On SW2 and SW3, osc VR lights up and the set plays great. Good audio on the phono input too.

So I take the tuner apart and check the osc circuit. The grid resistor is significantly off value, so I replace it. Clean…

Fellow member Dave Poland asked me a question about the service manual for the Sixteen. That query made me realize that I did not have the PDF file in the "Scott Info Archive". I have just added two Sixteen service manuals to that folder in the Archive. Both manuals appear to be missing pages 7-8....however. the full size schematic is what spans pages 7-8, so those pages aren't missing, you just need to look at the diagram for those pages.

Please let me know if there is other…

I just received an order from Antique Electronic Supply.

Just in case anyone is interested, they have some real nice 6K7G tubes in true NOS condition for only $2.38 each. These are JAN  military spec. tubes with the RCA logo on them. They look real nice and work just fine.

I also purchased a JAN 6J5WGT to replace my 6J5G which was highly microphonic. The tube I received works nicely and it is also a new condition (NOS)…

The SWLing Post is an excellent blog that I subscribe to. The owner, Tom, featured his recently acquired Scott SLR-M Marine Radio in a story about a short range AM transmitter, the SSTRAN AMT3000. He uses the AMT3000 to transmit music. He then receives and plays it on the SLR-M. A video is included with the story.
The link is:… Continue

All-Wave 23 in article on Museum

The SWLing Post just published a photo tour of the National Capital Radio and Television Museum of Bowie, Maryland. One of the featured radios is the E. H. Scott All-Wave 23. The article is worth a look.
http://swling.com/blog/2015/03/a-photo-tour-of-the-national-capital-radio-and-television-museum/

Capehart 300 Scott Philly back together

Finally put it all back in the original early 1930's Capehart 300 cabinet. Philly chrome is super nice and plays like a million bucks thanks to Bill L for his electrical restoration

Haven't been here in quite a while!

I have a question about a Super 12.

I have one I want to rebuild(new cap.'s and resistors). Mine MAY have some missing components. I can see that most of the resistors are 1/4 or 1/2 watt, but are there a few larger wattage one's in there also? Have never located a parts list. I do have all the manuals and schematics.

Got around to finish wiring the ant tuner on my Allwave 12 Deluxe .Was easy to do ,after I was done I connected a short wire to it.Wow was amazing how many stations came in so loud and clear on all bands,SW  was coming great in 15 feet of wire!The radio was not all that good till I got the Ant tuner fixed and hooked up it sure makes a big difference!Turned on my Philharmonic and let it play a while while I adjusted the Expander while it played..The Expander sure did help boost the sound and…

Do the letters mean anything as to what came with the set?

Set does not have fm, only am.

My name is Juliano and I am from Brazil.

Does someone have the schematics for this radio? Or does…

I have just finished a restoration on am Allwave 12 Twin dial highboy but am missing one brown bakelite knob. If anyone has a spare for sale let me know.

All...here is yet another one:

I am new to the list.  Our museum (www.museumofyesterday.org) just acquired our first Scott receiver (an A-15 Metro)  for our communications collection, and I am currently involved in restoring it. Since these were custom built radios, I was wondering if there exists anywhere a serial number listing of E.H. Scott's original clients who purchased sets.

hi new member here need some help and advice I have found a beautiful fully restored Scott Grand chassis and cabinet  my question what should I be looking at to spend for this set?? Any advice Thanks!!

I am a new member of this Scott enthusiast group.  Happy to be a member of your group.

I own a Scott model 510 console radio/phono.  It seems to be circa late 1940's.  It is in really good working condition.

Any information fellow members can share with me regarding this model would be really appreciated.

Hi, I just acquired this EH Scott radio. Can someone please identify it for me? ( model no. ,date of Manufacture etc.} It is working properly and is complete. Al

I just acquired this EH Scott radio. Can someone please identify it for me? ( model no. ,date of Manufacture etc.}

It is working properly and is complete. 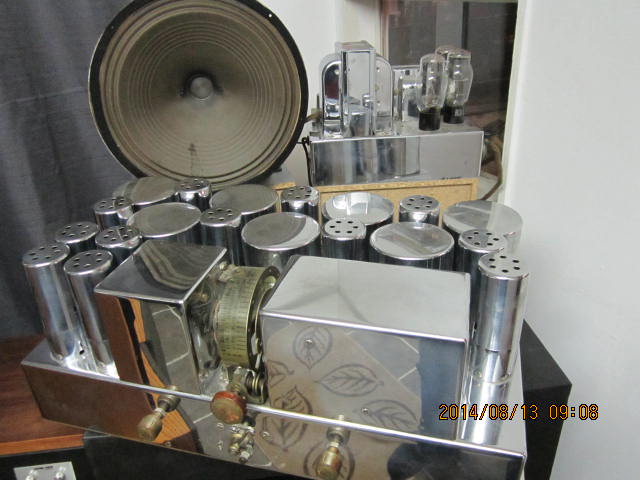 hello, I am wondering if any one would know the dc resistance of the center taped field coil and center taped output transformer for my phantom deluxe receiver?    or where to get a speaker ? I have more pics. It's in awesome original shape. Missing a few tubes. But complete other than that

what email address do I send to for sending photos of my radio from an ipad ?