All - The moderators removed an account that was a bit "phishy" today. We try hard to keep these folks off the forum, but every once in awhile, one gets in. Please ignore/delete any questionable messages and let's keep on talking Scotts!

I am still looking for a 15" Magnavox speaker with the round plug.

I have a tuner but no power supply.  Does anyone please have one available for sale?  Thanks, Jiri

So I finally found an 18" speaker for my Masterpiece V in Clifton cabinet.  The original speaker is most likely in Japan, courtesy of a greedy seller.

The MP5 amplifier in my radio has a six-pin socket for the speaker cable, and the speaker I have has a cable with six-pin connector as well.  What concerns me are the measured field coil resistances - 3410 Ohms between pins 1-6, and 365 Ohms between pins 3-6, respectively.  Both coils are connected in series.

I am looking for a PS. Don't need tubes necessarily.

Anyone have one for sale?

Hello, I have a AW23 in a Napier cabinet and currently the screws that hold the RF plate are rounded head.  Should I replace them with counter-sunk screws, or are the rounded head screws correct to this set?

value of a scott radio

I have a scott radio that's been in the family for 50 years. I like to know what it is worth, so I can put a price on it for sale. Serial # K569. I also her photos of it, it is in good condition & still plays well. Any help with this would be appreciated. thank You  Tony

I recently went on-line to see if there is a photo showing what the Scott Radio Laboratories building at 4450 Ravenswood Avenue in Chicago looks like today.  No image was posted although but it was described as having been built in 1895 and that it has annual property taxes of $61,233.  Does someone have a recent photo or photos of it that could be posted here?  What is it currently being used for?

Has anyone ever determined the address of E. H. Scott’s Chicago…

I've gotten an All wave 15 receiver chassis but I'm missing the power chassis.  Anyone have one for sale? 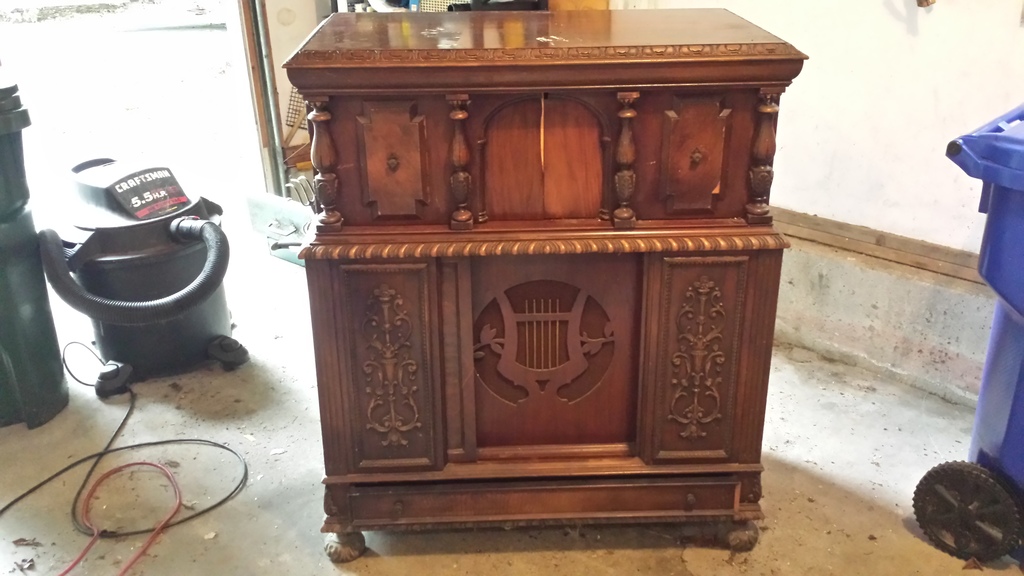 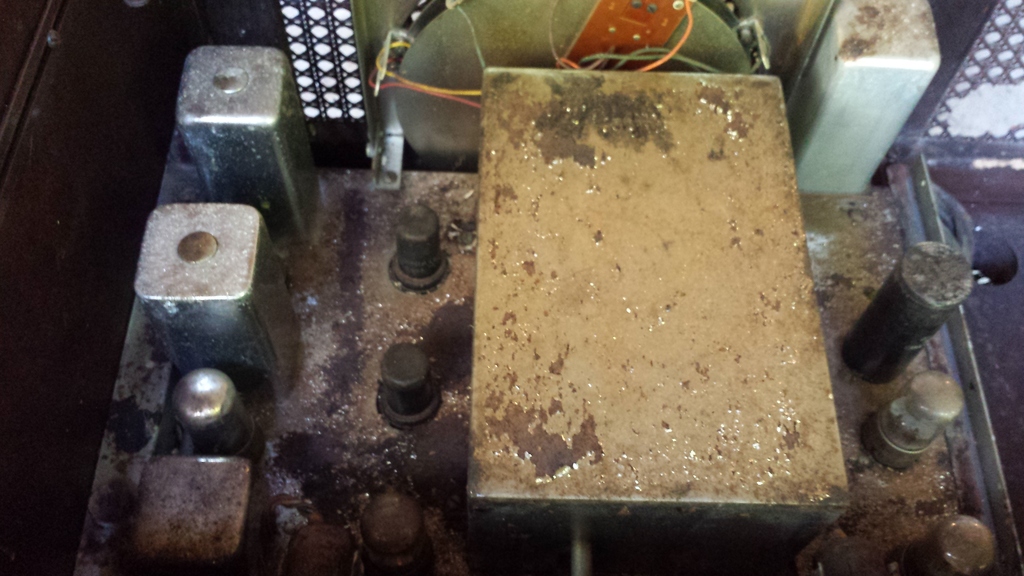 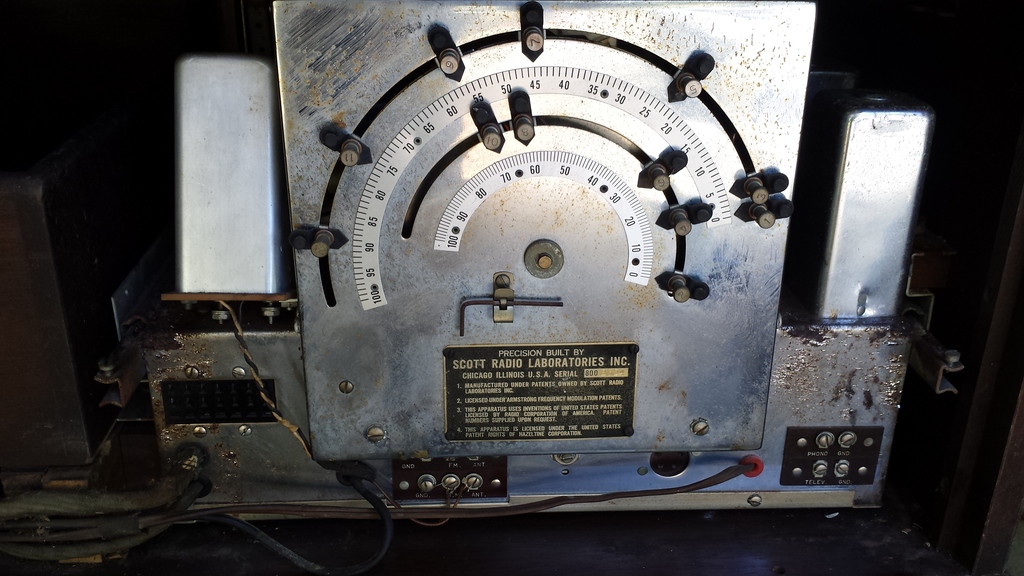 I have an 800 B in what the pictures i hope to be able to post will disclose is unfortunately in fairly poor condition.   I do as the prior…

Interested in what people know about these.  I have one in virtually perfect condition, with long cord plus what seems to be a second cord

Interested in what people know about these.  I have one in virtually perfect condition, with long cord plus what seems to be a second cord

Hello, I just joined the group. An old friend and avid collector of Scott radios gave me a Philharmonic rig (speaker, amp, wooden face plate with the all the indicators) the only things missing are knobs, tuning eyes and the metal bezel that supports the dial indicator glass. My friend had a piece of glass custom cut for it. Anyway, I need a bezel. Anyone know where i can get one or something that would work or ideas on how to fabricate one?

Been a variety of threads here mentioning tweeters. And now on ARF, a growing thread on AW-23 tweeters.

Thought a separate tweeter thread here on the Scott site might be useful for newer Scott owners.

- Scott first offered optional tweeters in 1935 with the introduction of the early 5 knob  AW-23  on account of a few new experimental wide band high fidelity AM radio stations at the top of the broadcast band - in a handful of major cities like Chicago.…

I've spent several days working on a particularly difficult chassis and learned something I thought I'd share. First, here is what I had to start with: A nice single chassis Super XII. The IF aligned beautifully, and the 3 SW bands also aligned "by the book". The set sounded great on any SW band, AM was basically dead. There are only 3 things that are AM only, so I verified each coil. While checking continuity on the oscillator coil, I happened to notice that the 1K resistor seemed to move a…

I came into a 510 Tuner recently and have renewed the caps and resistors as necessary.  I have the schematic for the Tuner and also the Power Supply/Audio Amp.  I built my own power supply/amp with 6L6s and a 6SN7 and diode rectification because one did not come with the tuner.  Now I need the alignment instructions for the tuner or better yet, the Service Manual.  Would anyone out there have a .pdf that would help??  Thanks very much, best, Steve

All, the Iowa antique radio club is having an auction this Saturday and we've got a box of chrome tube shields that is labeled "Scott tube shields".  I could probably bid on these if anyone wants them.

I have no idea what model they belong to. 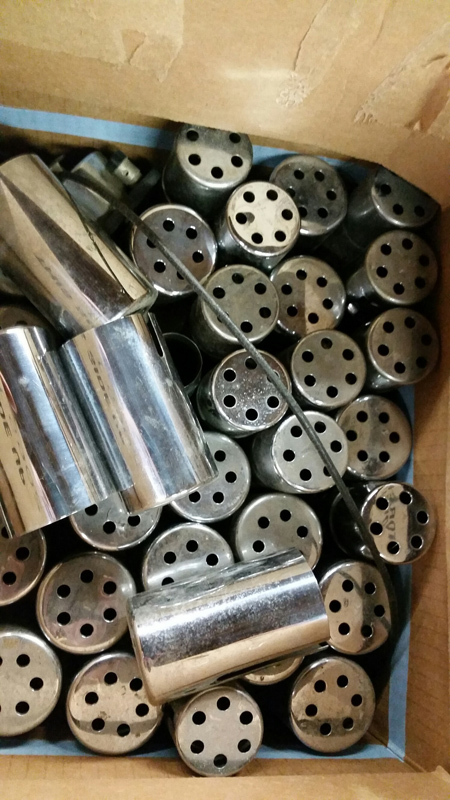 Does anyone have an idea of what speaker went with the Battery Allwave sets of the early 1930s?

These would be the 6 volt and 2 volt Allwave receivers.

Hi Kent:  I am working on a Shield Grid 9 now that is in very good shape. I have dismounted the SGA (shield grid assembly) because of low filament voltage on the three 22s - max I can get is 2 volts with 5 volts on the entry bus.  Taking that SGA off and opening it was much more of a chore than necessary because the designer apparently didn't think it would ever be required.  The paperwork discusses the short wave ability of the SG-9 and the need to change the coil in the 630 Antenna…