I have just been given a Scott 800B. It's all complete except for the tuning motor which was removed for some reason. I was wondering if someone might have one on a parts chassis that they would part with?

The beveled gear on the end of my Allwave XV band switch shaft is missing a tooth but otherwise looks OK. The missing tooth causes the mechanism to slip and catch when switching from broadcast to shortwave. Is there some way that I can re-orient that gear on the band switch shaft so that the segment with the missing tooth isn't in the range used when switching from BC to SW3?

My mother is elderly and owns the following radio, it is in great shape but nevertheless needs minor repair and restoration:

I inherited my radio from my parents who purchased it when they attended the
1934 Worlds Fair in Chicago.
It was purchased, paid for. and then shipped to Arizona where my parents
lived.  It apparently is a Tassman model - this info was given me by my son Curtis
Walling who did some primary…

I am working on a Philly amp and am finding a number of wiring mods that deviate from the schematic. Some are due to someone bypassing a bad audio transformer and for adding a second phone plug input with volume/mixing pots.

But I also found a 125 ohm Candohm type resistor that is factory mounted to the side of the amp chassis. It is connected in series to the cap connected to pin 6 of the set plug socket and then tied to ground. It doesn't show on the schematics that I…

I subscribe to an excellent blog called the SWLing Post. It is run by Thomas Witherspoon, a man who has boundless energy.

Recently he featured a Crosley radio that was competing for the high end market back in the late '30's. At the end of the article he asked if any of his readers had a 'benchmark' radio.

I responded with a few photos of my BOL Philharmonic and he created a post from my information.

Glad to be here and hopes my builds pictures are liked and will post some of my E.H.Scott sets

I am glad to see all the nice pieces on here. I am a collector and it never seems to end.When I was in High School made a communications radio and won a blue ribbon 1st place in K9EWU'S Don Houdes electronics class class and had a project when I was in College and had access to the metal shop. Was good friends to one of the teachers. wanted to make a high fi amplifier. Well made a 50 watt stereo unit and wished I kept it as it was. Made it into this big thing. A friend of mine spoiled with…

I just picked up a new in box Sylvania leaf 6J5G-RC. Does anyone know what the RC suffix is? I looked through all of my vintage Sylvania tube manuals and all that is listed are the G and GT types with no mention of the RC suffix...Could it be some type of an industrial or low noise variant?… Scott made plug-in SW coils for the Shield Grid 9. I'm researching them a bit and I could use more data points. If ANY of you have some of the SG9 SW coils, please contact me. I've got a few questions for you. Thanks!

Replacing the 7 capacitors in the Bass Box

My Philharmonic had a number of problems when I first began to repair it. Once all the major problems were taken care of (thanks mostly due to several very helpful people on this forum) I finally got around to the nasty bits. There is rectangular box under the chassis which I think is called the Bass Boost Box. All seams are fully soldered together and the wires that leave it come out just one hole. It was recommended that I change out all of those capacitors. I saved that job for…

I am offering the remaining stock of incomplete Scott remote control keyboards being reproduced by the late Jim Schwalbe through the site accessible from the link below.

If you are interested, I recommend that you place your order through that listing according to the rules of that site. If you try to order directly from me…

Is this Laureate in a Oxford cabinet

Been a while since I wrote. I picked up a Scott Laureate and would ask if anyone could confirm the cabinet type for me. From pictures on the site, it most resembles the Oxford cabinet Y2K Bruce has posted. This one however has a split top, a front door and a bit more gingerbread carving. Would you consider this to also be an Oxford cabinet? My Laureate has the spot for a turntable but it appears one was never installed. It has a different speaker and includes the tweeters…

The shortwave station WTWW runs a Christmas event each year. They ask listeners to submit a photograph of the radio you are using while listening to Christmas music on their station.

Last year I submitted a photo of a Zenith Trans-Oceanic I was using.

This year I took a photo of the Scott Philharmonic which I recently put back together and placed in my radio room so I can use it. My photo is below. ( the knobs are all wrong - someday I will find a set).…

Was wondering if one of you knowledgeable  folks could tell me what model I might have. No identifying tags on item Any info would be much appreciated 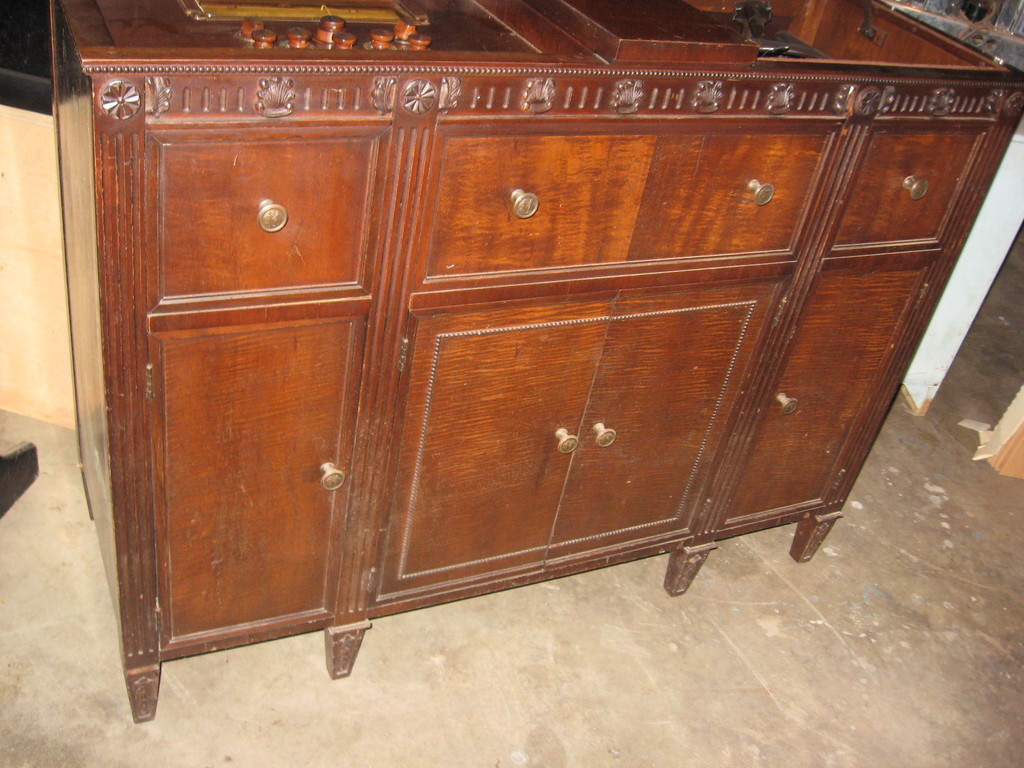 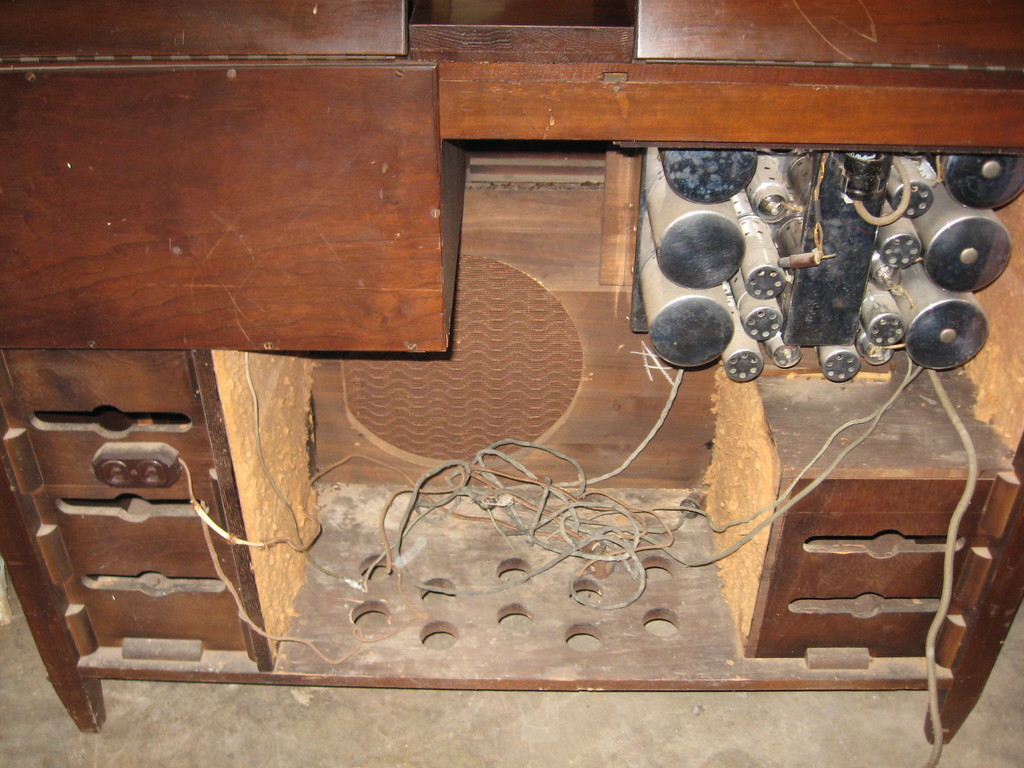 Was wondering if one of you knowledgeable  folks could tell me what model I might have.

No identifying tags on item

I have found on line that this type of radio was used on Aircraft carriers tankers and land stations for communications with aircraft. 115 VAC 115-156 MHz AM other than that any info will be helpful

Good afternoon. Once I saw in You Tube exellent receiver produced by Scott Radio (https://www.youtube.com/watch?v=kMRtU0pf88o). I would like to know more about this one. Help me, please.

Once I saw in You Tube exellent receiver produced by Scott Radio (https://www.youtube.com/watch?v=kMRtU0pf88o).

I would like to know more about this one. Help me, please.

I've been looking for an Allwave 23 Imperial in the Valencia cabinet #79/80 in the Clark book. If anyone knows the where about's of one, please let me know. Thanks!

OK. Figured it out. Thank-you whoever posted the 1 choke schematic. It's the speaker transformer not a choke. Sure is heavy. They made 'em big in those days.

I have an 800B with 800B dial and back marked serial 800 262.
The power supply has the single choke on it with a heavy 6 wire choke
mounted on the speaker and connected via the speaker connector and
harness. The radio was working fine 10 years ago when the radio was
put in storage and power supply chassis were separated and the wires
detached from the speaker and tweeter. Some of the choke wires got
detached as well. Where can I get a schematic of how to reattach…

Something Called A Magnavox Concert Grand I forgot to discuss!

With all my talk about the top radios we all love, I forgot to tell you about my Magnavox Concert Grand, the 1861 console phonograph that is considered by many the finest console stereo phonograph ever made. First there is the outstanding cabinet which is a beautiful piece of furniture in any of the styles which were released. Mine is the French Provincialin Mahogany and weighs about three hundred pounds and contains 42 (!) tubes. It has a turntable made by Collaro of Britain and uses two…